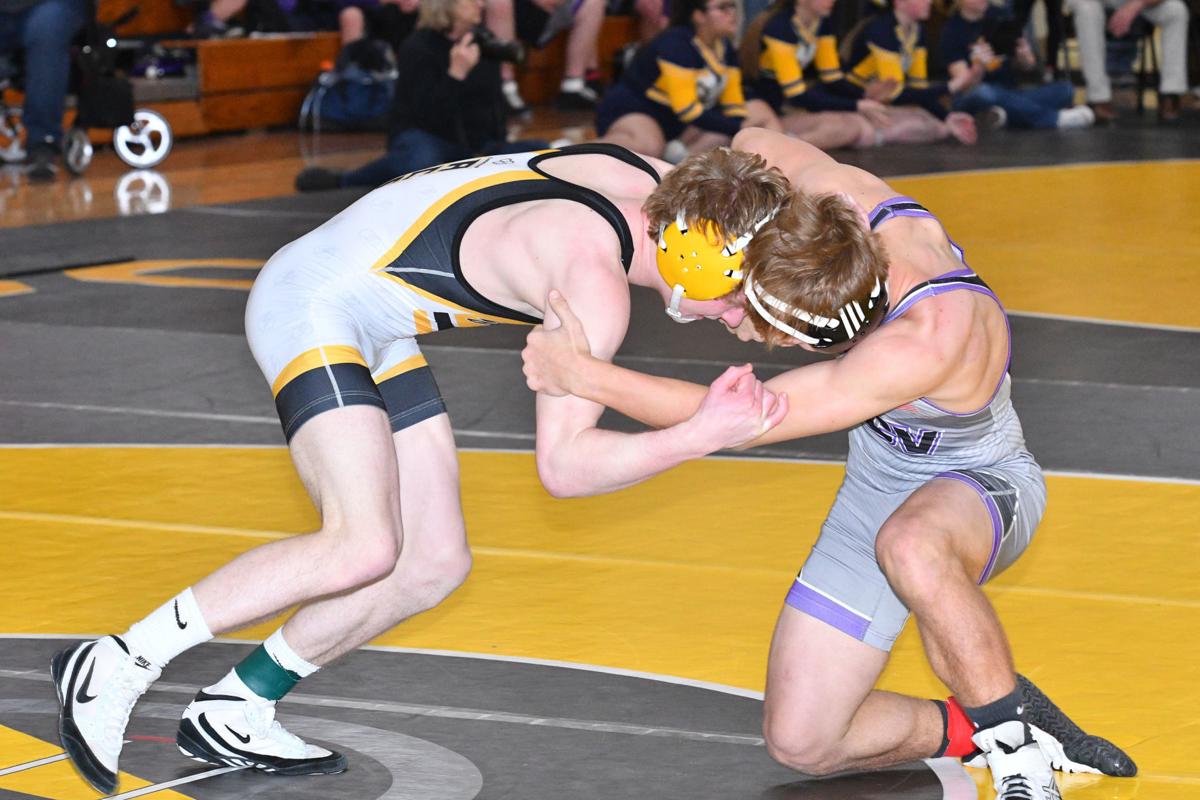 ACGC’s Gunnar Larsen works go bring down West Central Valley’s Cael Carl during the finals of the Class 1A Sectional meet Saturday in Guthrie Center. Larsen won by fall at the 5:17 mark. 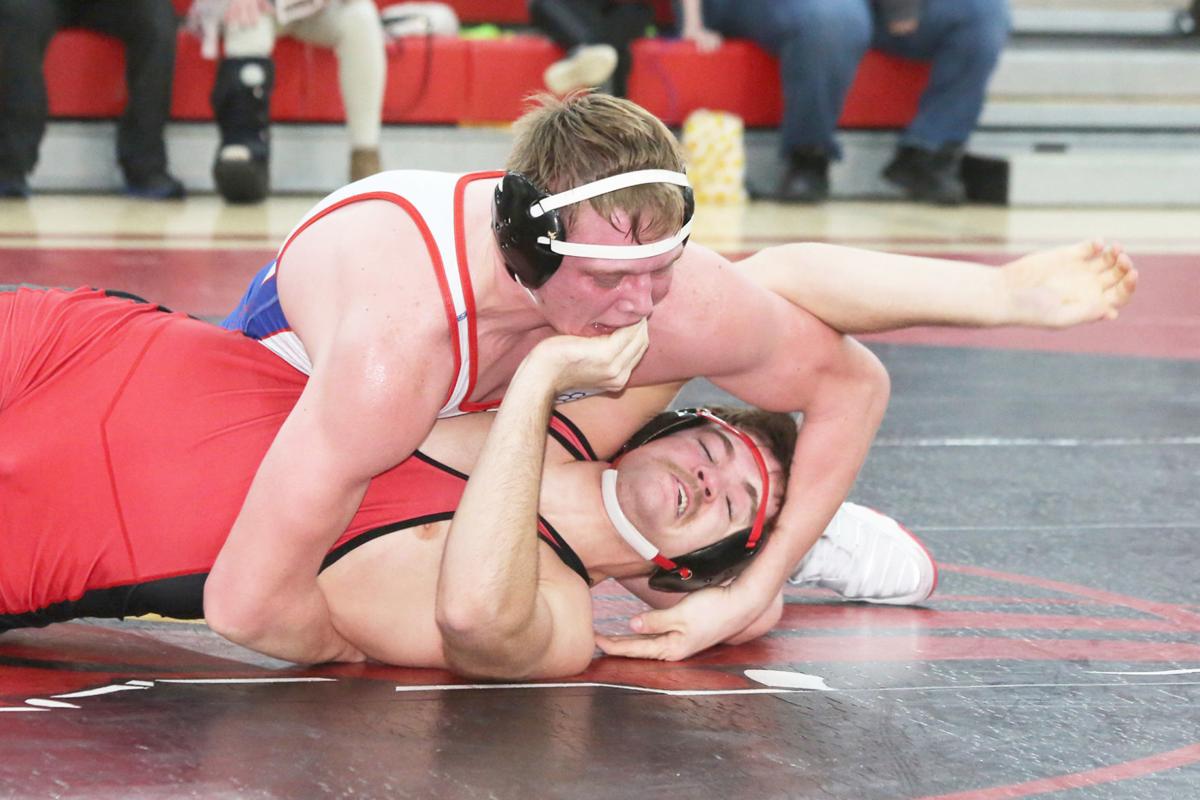 AHSTW’s Gavyn Fischer picked up three wins Thursday, Jan. 23, at Harlan, including a pinfall win over the Cyclones’ Nathan Henry in their 195-pound match.

ACGC’s Gunnar Larsen works go bring down West Central Valley’s Cael Carl during the finals of the Class 1A Sectional meet Saturday in Guthrie Center. Larsen won by fall at the 5:17 mark.

AHSTW’s Gavyn Fischer picked up three wins Thursday, Jan. 23, at Harlan, including a pinfall win over the Cyclones’ Nathan Henry in their 195-pound match.

UNDERWOOD – Two brackets to watch, and several others that are wide open.

It’s little secret – or should be – that southwest Iowa should be well represented at the Iowa state wrestling meet next week as the field of District 7 wrestlers is whittled down from 56 to 28.

Action starts at noon, and here’s what to expect:

Note: Each matchup lists the district champions first, the first one listed at each weight from Sectional 13. All records are from TrackWrestling.com; rakings are from IA Wrestle.

Outlook: Schroder and Porter met for the first time at last week’s sectional meet, with Porter scoring a pinfall victory in just 1:06. Schroder is favored in his first-round match and earn the right to redeem himself against Porter in the championship.

Outlook: Rose won an action-packed championship final against Cooney at John J. Harris Invitational three weeks ago, and a rematch seems likely as both are favored to win their first-round matches.

Outlook: While state title contender Barnes the overwhelming favorite to win the district, fans could see an entertaining semifinal match pitting Fischer against Breheny. Fischer has had moments of brilliance and if he can catch a break, he should earn a rematch against Barnes and position himself for a repeat trip to Wells Fargo Arena.

Outlook: Danker has been one of the Chargers’ leaders this season, with one of his best moments being a second-place finish at the Charger Invitational two weeks ago and with some work has a good chance at getting to the final. Stephens and Garcia could be a toss-up for the other district spot.

Outlook: This could be the bracket to watch, as Ziegler comes in ranked 10th and both Larsen and Sampson, both state qualifiers a year ago, were ranked at some point during the season. It is a shame that one of those three will be staying home next weekend – Ziegler also made the Well trip last year – but this regional should be well-represented at state, especially by the winner of the Larsen-Sampson matchup.

Outlook: The Pote-Moore matchup could be entertaining as both have very similar records. The winner is a likely district runner-up, as James is the obvious favorite.

Outlook: Rowley has been pretty consistent this season and is right in the mix for the runner-up spot – Lutz and Beanie also have good records – and if the Charger wrestler gets by Tryenor’s Lutz, a matchup with Hamilton will be in the cards. It would be an incredible upset if Hamilton came away with anything less than a district title.

Outlook: It’s by no means an easy out for Rasmussen, ranked seventh in the final IA Wrestle poll, but he’s had some great moments this season. Despite just 18 matches this year, Thomsen is the favorite to win the district title.

Outlook: Gabe’s cousin, the Western Iowa Conference champion, has been starting to show signs of the two-time state champion’s brilliance and was recently rewarded with a debut in the state rankings late in the season. Wilson surprisingly is ranked ninth despite just one loss, but the 160-pound weight class is loaded statewide and both Denver Pauley and Wilso will be excellent representatives at state should that be the district championship. As for Bladt, the district meet will be excellent experience for next year, which will be his senior campaign, however, he is a dark horse and capable of pulling an upset.

Outlook: If you thought the 132-pound weight class looked exciting, get a load of this bracket: Three ranked wrestlers, including Venteicher, who placed third at state a year ago. St. Albert struggled mightily last year but is on the rebound, and McLaren is at the heart of the effort. Kiesel rebounded from a tough Charger Invitational to take runner-up honors at the district meet, and has shown that being focused will translate to good things. Again, two of these three ranked wrestlers make the trip to state, the other stays home. Look for all three to be ready.

Outlook: This could be a wide-open race as none of the wrestlers are ranked. Hendricks has come on strong toward the end of the season and has as good of shot as any of his potential opponents to advance to state.

Outlook: Fischer has 32 pinfall victories to his credit this season and several key titles, including the Western Iowa Conference, Rollin Dyer and Charger titles. The heart of the AHSTW’s roster, Fischer is the favorite to win the district title. Olson is one of just two Corner Conference contenders for the state meet; a district qualifier a year ago, he rebounded from a disappointing effort at the John J. Harris meet to win a district title. Coleman won their regular-season matchup in December, but that was then, and Olson would love nothing more than to get revenge and position himself for being the Tigers’ first state qualifier in five years.

Outlook: Mosinski was a state qualifier last year and was a key all-state lineman for the Wheelers this past fall. In a three-way race for the title, he appears to rise head and shoulders above Gardner and Myers, although don’t count Barr out.

Outlook: It’s surprising that Whipple isn’t ranked despite a sterling record, but an entertaining first-round match with Canada is very likely. Canada has been hampered by injuries but when he gets on the mat has been a tough wrestler to take on. If Canada gets by Whipple, a rematch with Fox is very likely.