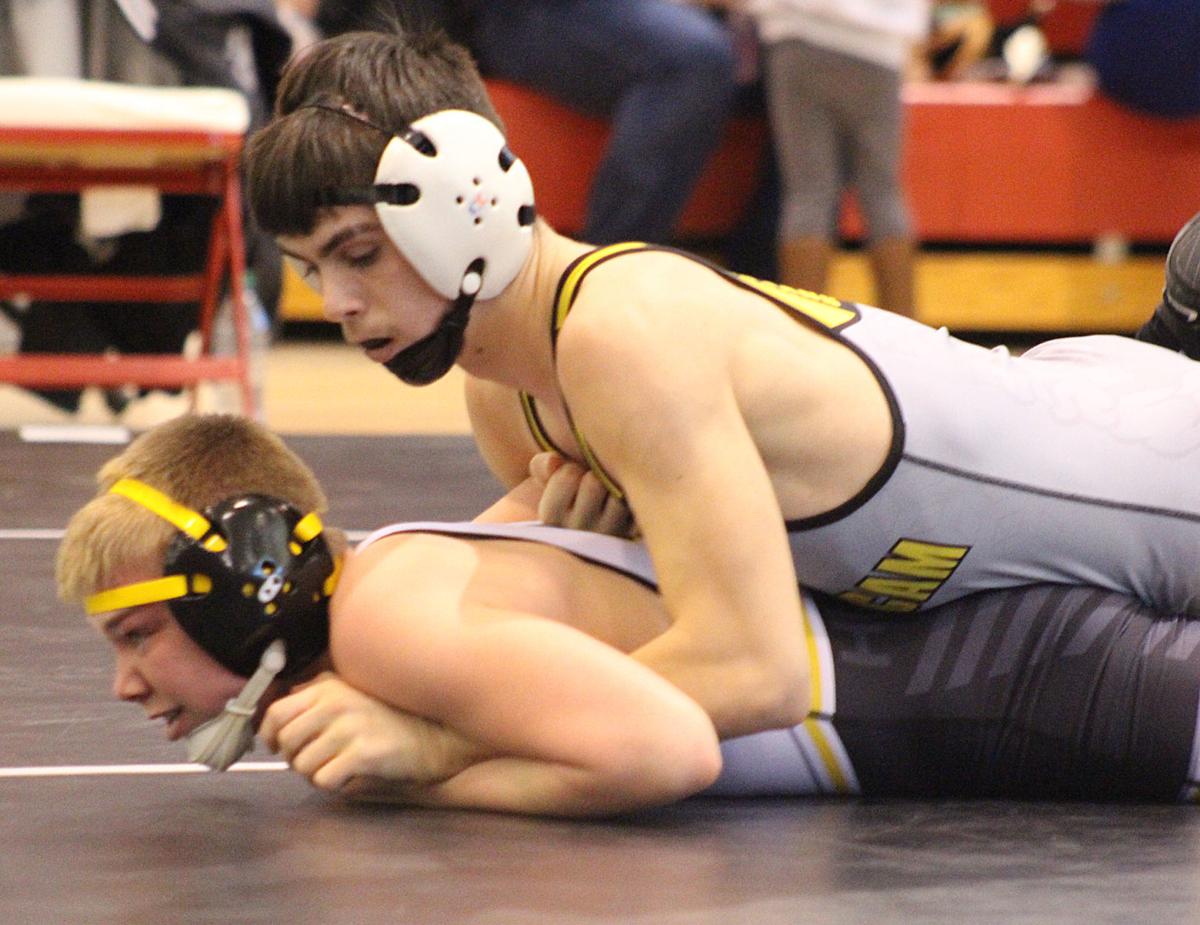 Atlantic-CAM’s Aybren Moore works over Zeke Hoven of Winterset in their 113-pound semifinal. 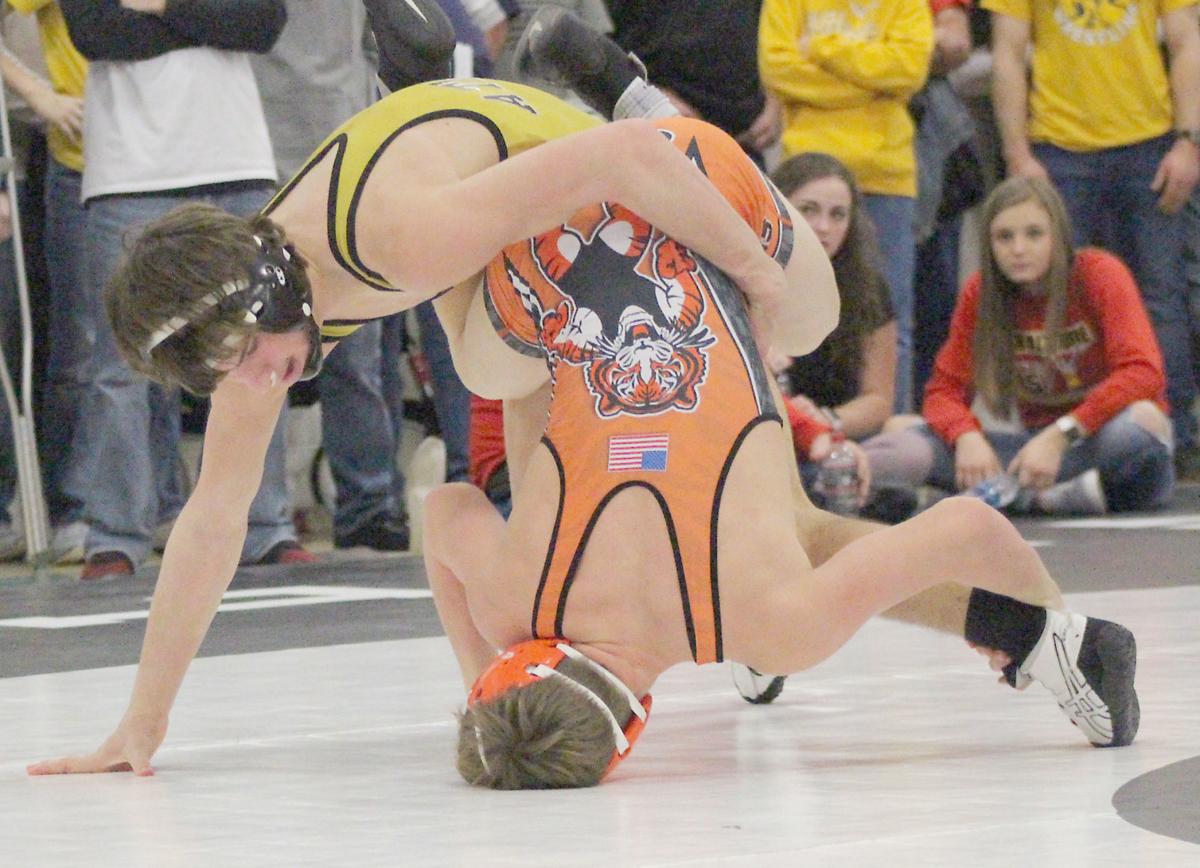 Atlantic-CAM’s Aybren Moore works over Zeke Hoven of Winterset in their 113-pound semifinal.

ATLANTIC – Atlantic is sending a lucky seven to Saturday’s Iowa Class 2A district meet on its home mats.

Both Moore (10th in the last IA Wrestle poll) and Roller (No. 7) are seniors and are looking to anchor the trip to Des Moines this weekend.

But it’s a tough district, as of the 56 wrestlers looking to punch tickets to the Well – Wells Fargo Arena in Des Moines, that is – 18 are ranked. All but two of the weight classes have at least one ranked wrestler.

Here’s what to expect from what should be a very entertaining district meet, which kicks off at noon:

Note: Each matchup lists the district champions first, the first one listed at each weight from Sectional 3. All records are from TrackWrestling.com; rakings are from IA Wrestle.

Outlook: O’Brien pinned Brandon Erp in the semifinals of the Hawkeye Ten Conference meet and has the upper hand in their semifinal matchup. Robbins is favored to get past Schmitz to set up a sectional championship rematch.

Outlook: Vengance is the theme at 120. For Follmann, it will be overcoming a pair of losses to semifinal opponent Musich, including being pinned at the Hawkeye Ten Conference meet. The records are similar and they say it’s difficult to beat a wrestler three times. Schmitz, meanwhile, placed third at state as a sophomore but was shut out of the big meet a year ago despite a top-10 state ranking. He should avenge that this year and perhaps reach the podium in Des Moines, but that’ll mean getting past Erp, who placed eighth at state last year.

Outlook: Weaver is a returning state qualifier who was ranked earlier this season, and his semifinal match with Lemon is the rubber match between the two. Weaver pinned Lemon during their regular season meet before Lemon turned the tables and handed Weaver a 9-6 loss at the Hawkeye Ten meet. Weaver is 2-1 against Bond, beating him in their regular season meet and at the John J. Harris Invitational, but losing to him at the Hawkeye Ten Conference meet. If Weaver is focused and on his game, a return trip to Des Moines will happen. Both Bond and Jensen are freshmen who should be state placewinner contenders in future years, regardless of how things go Saturday.

Of note: IA Wrestle, one of two websites that provides rankings and news for high school wrestling in Iowa, marked this as a bracket to watch; despite no ranked wrestlers, the editors determined that all four contenders are evenly matched.

Outlook: Hatten has only 14 matches under his belt but that hasn’t stopped him from his late-season roll. Hawkeye Ten runner-up Wurster is the most likely opponent.

Outlook: A showdown between Kiburz and Parkis is imminent, as both are heavily favored in each of their matches.

Outlook: West has the upper hand if competition alone is a factor. Hauschild would love to be one of just two possible representatives from the Corner Conference at the state meet, and to the Cowboys’ credit they have wrestled a good schedule, but whether that is enough to overcome Colby remains to be seen.

Outlook: Appleseth is the clear favorite to become champion; he’ll likely face Brown in the championship.

Outlook: McCunn is a returning state runner-up and among the favorites to win a state title. Anything less than a district title in dominating style will be a disappointment.

Outlook: On paper, Fewson has his work cut out for him against Bendorf, the Hawkeye Ten Conference champion, but Fewson pulled off some late-match magic in his sectional wrestleback match and, at this stage, it’s win or go home. Lukehart is the H-10 runner-up, dropping a 5-2 decision to Bendorf in the title match. Look for a rematch for the district championship.

Outlook: One of Glenwood’s best chances to advance wrestlers to state comes here as Mayberry should be favored in his match over Hoven. Kinsella is the huge favorite to win the title and, at state, better his eighth-place showing.

Outlook: McKay is another one of those Atlantic wrestlers who have had periods of success and times where wins were hard to come by. While it would be an upset to advance past Chapman and Maynes, McKay is on an up cycle and has given opponents with better records some of their most challenging matches. Call McKay a darkhorse.

Outlook: Howard is the prohibitive favorite to move on to state. Schwery won both regular-season matchups by pinfall over Wanninger and is the favorite to advance to the title matchup.

Outlook: Roller has been focused this season on reaching the podium at the state meet, and will need to be focused against Clark, a returning state qualifier at 195. Roller won their regular season match 4-2, but if he gets by Carter a trip to state should be easily obtained, regardless the outcome of his rematch with Sutton, last year’s 285-pound state runner-up.