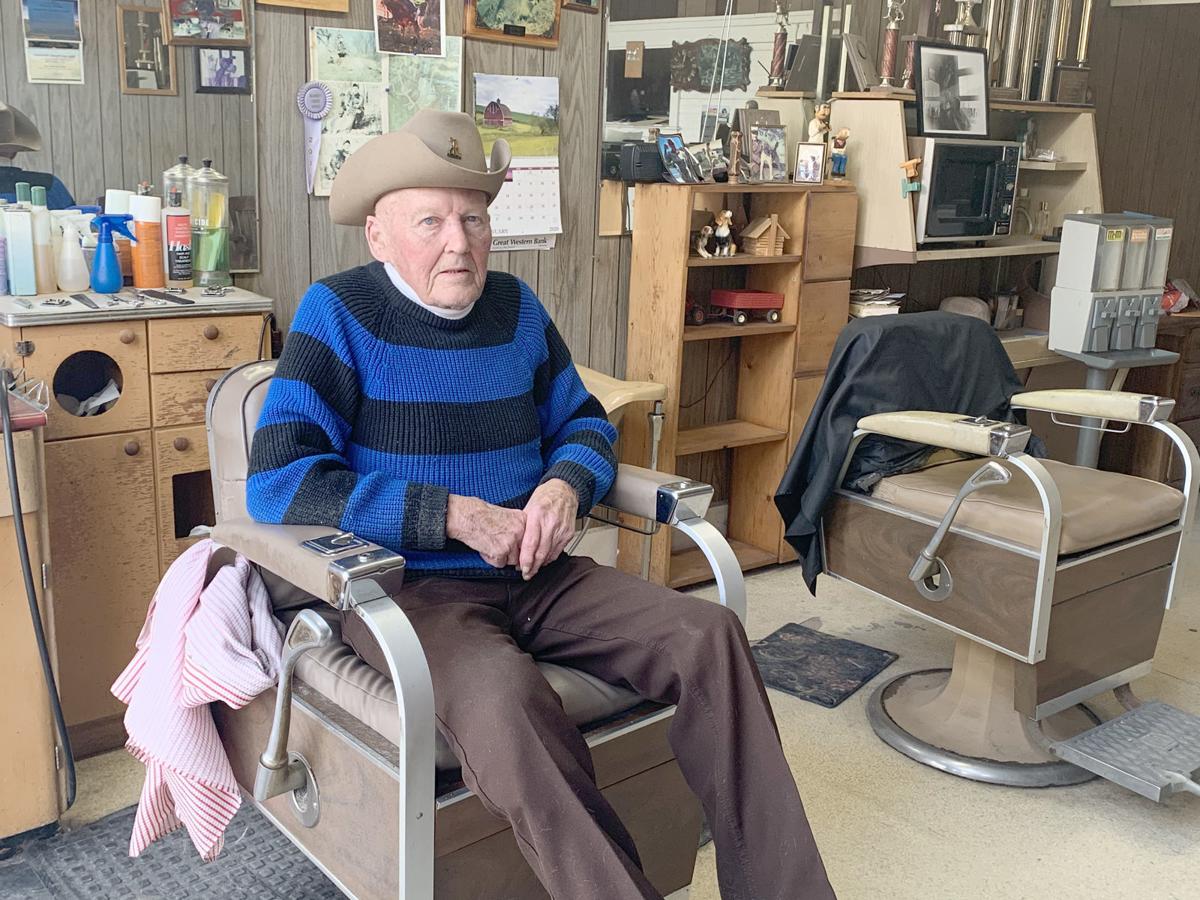 Mike Mikkelsen — owner of Mike’s Barber Shop in Atlantic — sits in one of his barber chairs at the business. He’s been in the same location for over 50 years. 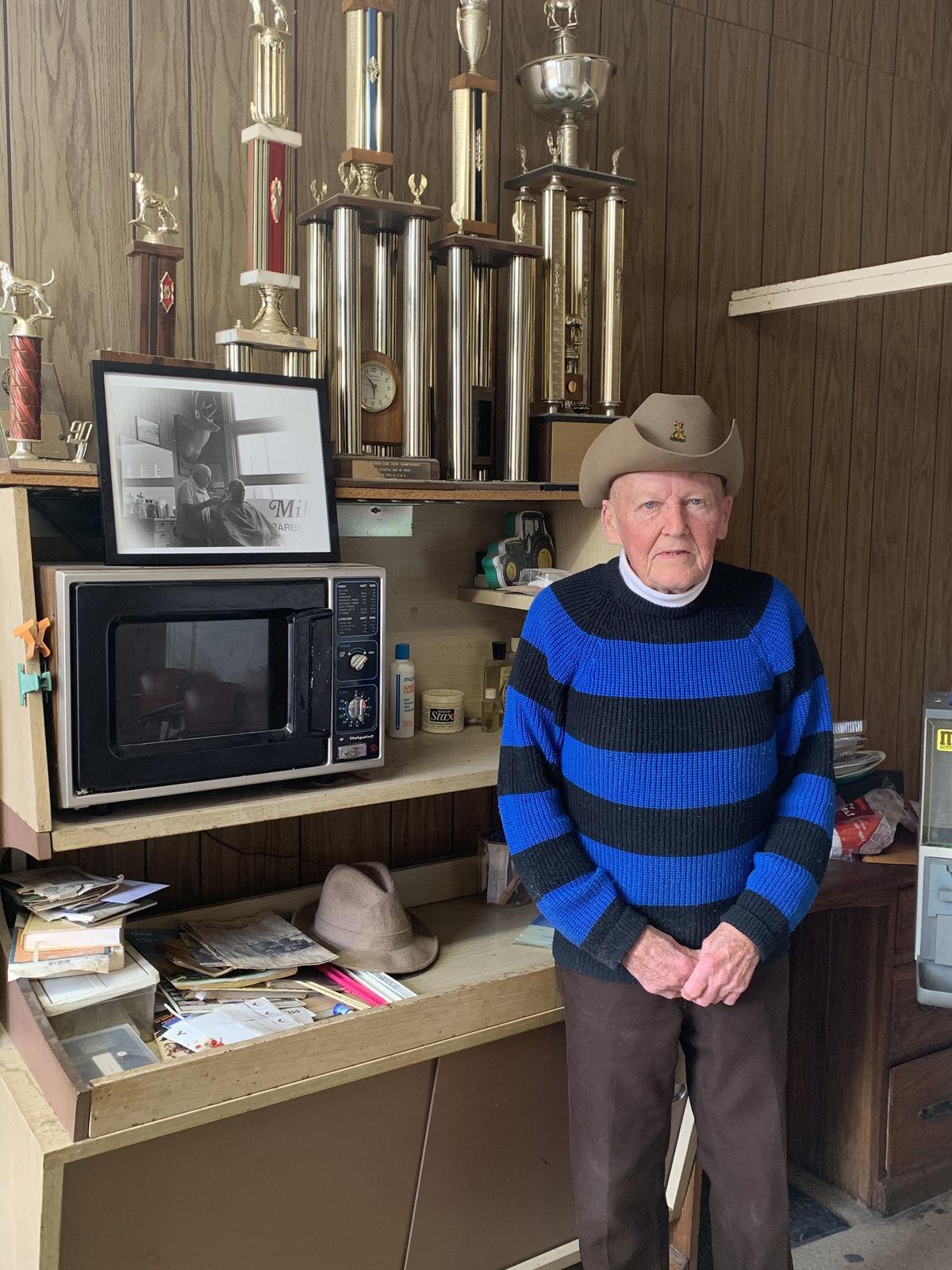 Mike Mikkelsen- owner of Mike’s Barber Shop — stands with some of trophies he won from showing horses and other competitions.

Mike Mikkelsen — owner of Mike’s Barber Shop in Atlantic — sits in one of his barber chairs at the business. He’s been in the same location for over 50 years.

Mike Mikkelsen- owner of Mike’s Barber Shop — stands with some of trophies he won from showing horses and other competitions.

ATLANTIC – Mike Mikkelsen was probably like a lot of other kids when he was growing up. He was born and raised at his home about two miles west of Kimballton.

“I went to the old country school out there,” he said, explaining he had to walk about a mile to get to school.

He grew up on a farm, and his family grew corn, oats and hay, and they raised cows, horses, chicken and pigs.

“I usually had to do chores before or after school,” he said.

After he graduated from high school at Elk Horn, he worked for a veterinarian, as well as doing some construction jobs and also hauled eggs to a hatchery.

“I really (wanted) to be a veternarian, but I didn’t have that kind of money for school,” he said.

So instead he decided to go to the Iowa Barber College, and that was in 1957.

“The joke (I tell people is) I decided I’d remove hair from people’s heads instead of horns from cattle,” he said.

He spent six months in barber school, and then started working at the “the Hub Shop in 1958. That was the barber shop on the main street (in Atlantic). There was five of us in that shop when I started.”

He said at that time barbers who just graduated had to work with someone who already had a barber shop for a certain amount of time before they could open their own shop. Mikkelsen worked there for six years, and then opened his own shop, which is in the same building today — at 9 East Fourth Street in Atlantic — as it was over 50 years ago.

“We’d start at 8 o’clock in the morning, and we go to (until we closed) at 5 o’clock, but sometimes it may be 6 o’clock until we got out of there,” he said. “And of course Saturday night, it would 9 or 10 o’clock. We were always open Saturday nights. so we’d put in a long day.”

He said haircuts like the flat top and the duck tail were popular, and his shop was popular because, “A lot of the older barbers weren’t trained to cut flat tops and stuff.”

Then he remembers the “hippie days.”

“People just grew (their hair out and didn’t get it cut much),” he said. “That’s when a lot of barber shops closed because a lot of people didn’t want to get their haircut. (But) I hung in here. I was a stubborn man.”

Mikkelsen said he offered, “a lot of shaves, shampoos, facials and haircuts” at the shop, and these days he just offers haircuts, and trims beards. He jokes that price is one big difference from years ago until now, and he said, if people give him a hard time about the price he says, “I tell him I’m like a doctor. I removed a growth from your head, so you can see if your insurance will pay for it.”

He gets customers from all over about a 40 or 50 miles radius, and he said, he doesn’t make a lot of appointments for people-usually they just drop in to the shop.

Mikkelsen said he grow up showing horses, and also hunted coon dogs. So naturally, that was a topic of conversation with customers.

“They would stop in, and we would always talk about coon hunting, horse shows, and a little bit of everything in between,” he said.

He says he hears at lot of “news,” when he visits with customers and “a lot of it you can’t believe.”

His family includes a son, Dan, who has the Wildlife Creations store at 417 Chestnut Street in Atlantic, and a daughter, Debbie, who lives in Colorado and is a wildlife artist. His wife, Rose, passed away in October of 2015. He said his son was part of the reason they started coon hunting.

“I guess when my boy was little he saw ‘Where The Red Fern Grows,’” he said. “so he thought he wanted to go coon hunting. We just had to learn by ourselves.”

“That big one on the end is a big show I won down in Des Moines against all the breeders,” he said. “It was breeders fratnerity. And that was like winning the Kentucky Derby for me.”

When he’s not at his shop — which now is 8 a.m. to 1:30 p.m. on Monday, Tuesday, Thursday and Friday, and 8 a.m. to noon on Saturday-he’s closed on Wednesday and Sunday- he said he likes to camp, fish and hunt, and he and his wife even served as hosts at Lake Anita State Park for a couple of years. He said you basically had to make sure the bathrooms were clean, help people find a spot for their camper if they needed one and answer any questions visitors had about the campground. He and his wife would also stay at a cabin in Winterset, and he still likes to camp and bike these days.

Another hobby he has now came after he spoke with a classmate of his many years later. Her name is Ann Lane, and she lives in Oklahoma. Mikkelsen said one day he was talking to her brother-in-law, who still lives in the Atlantic area, and he asked about Lane, discovering her husband passed away 10 years ago. Her brother-in-law gsbr Mikkelsen Lane’s number, and he decided one day to give her a call.

“She couldn’t believe it,” he said.

They visited, and she suggested a hobby for Mikkelsen- putting together puzzles, and then she sent him some to try.

Despite all the other hobbies, Mikkelsen said he doesn’t plan to retire from the shop anytime soon.

“I’m not thinking of throwing my hat in yet,” he said. “As long as the Good Lord will still let me drive, and get in here, why I’m figure on staying. It gives me something to do.”

Partly cloudy this evening, then becoming cloudy after midnight. Low 28F. Winds NE at 5 to 10 mph.

Partly cloudy this evening, then becoming cloudy after midnight. Low 28F. Winds NE at 5 to 10 mph.