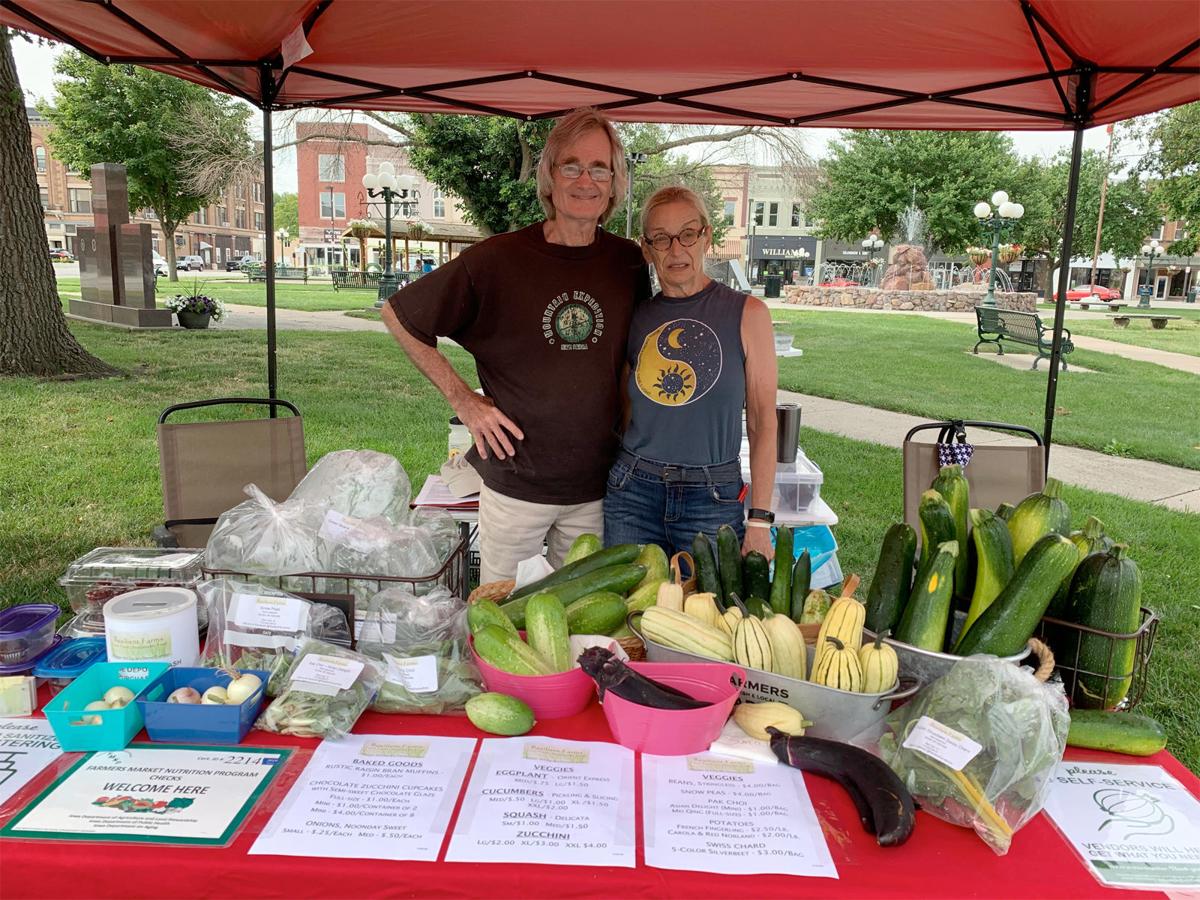 Steve Turman and Maggie McQuown in their Resilient Farms stall at the Red Oak Farmers Market. 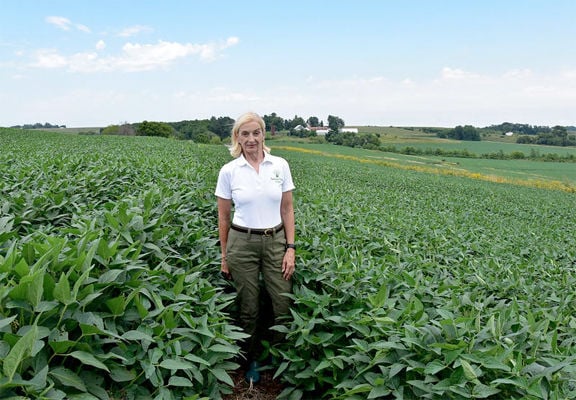 Maggie in a 2020 soybean field with the farm building site in the background.

Steve Turman and Maggie McQuown in their Resilient Farms stall at the Red Oak Farmers Market.

Maggie in a 2020 soybean field with the farm building site in the background.

RED OAK – Maggie McQuown never expected to be operating her family’s farm in Red Oak, but 40 years after she left to attend college and make her way in the world, that’s exactly what she is doing.

McQuown is living on a farm that her great-grandparents lived on back in 1928. It was passed down to her father, and where her mother, her two brothers and her sister lived while she was growing up. All of them helped out on the farm.

McQuown said the family had a typical farm for the times, with some cattle, some hogs, some chickens,two to three milk cows, and corn, oats, sorghum, lots of small grains.“

She said they didn’t start growing soybeans until the 1960’s and it was about that same time that they stopped raising most of their livestock, except for some cattle.

McQuown was active in 4-H, and one of her memorable projects was a live demonstration with a friend who was also in 4-H.

“We both liked sewing and fashion,” she said. “So we put on a fashion show.”

She said they did everything from making all the outfits, to designing the set, to picking out the music to modeling the clothes. Their demonstration was picked to go to state.

After high school, McQuown’s plan was to attend Iowa State University, and major in chemistry. While she loved living and working on the farm, she assumed one or both of her brothers would take over the farm operations.

However, majoring in chemistry was not something that was easy for women at the time. As one of 12 females out of 400 freshmen in the program, he said the men often “hazed” females who tried to be part of the program, and she eventually switched her major to textiles and clothing and minored in business and journalism.

That switch paid off when, after college, she moved to New York City, and worked for a couple of fabric companies. At one, she was a promotion stylist and at another was the color forecaster and created fabric lines for each season.

“I loved both those jobs,” she said. “But I had other friends that were in marketing and advertising at ad agencies.So I ended up moving more toward the marketing side of things, and went into advertising.”

One of her first advertising jobs was working for Cotton Incorporated.

“And that was an interesting job because it was a brilliant concept,” she said. “Forminga marketing company to market a commodity to compete with synthetic fabric.It was the first of its kind.It was the first commodity that had farmer voluntary check off of a $1per bale would go toward marketing budget. So I got to know a lot about cotton farmers, cotton manufacturing and then ultimately the end product- towels, sheets, cotton shirts, demin, polo shirts.”

She later helped with the well known campaign, “the fabric of our lives,” for cotton.

“Even though I wasn’t involved with agriculture, it (felt like it) was all tied to agriculture. I felt good about helping nature fibers compete with synthetics,” she said

McQuown worked in New York for 14 years, and at one point she got a call from her dad.

“He asked “Why don’t you come back and run the farm?” she said recounting the conversation.

While one of her brothers had planned to take over operations, circumstances led to him not doing so, and her father thought she would be a good candidate.

“And I said ‘What? I know nothing about agriculture’ (And he said) ‘You can learn agriculture- you know business (which is important to know.)’I think it was my dad kind of saying I’d really like someone in the family to run the farm.

However, it would be several years before McQuown would take up her father’s offer. Instead, she moved to Chicago where she worked at an ad agency for five years. She got a job offer in Dallas at a marketing firm, and after a while, she created her own image consultant and branding business. She would also meet her future husband, Steve, there in 2002. They married in 2005.

Steve had some agriculture experience as well, when he spent weekends and summers helping his grandfather on his cattle operation growing up,

Eventually the two would start having the conversation about where they would like to retire, and part of that decision came when the two were becoming more aware of climate issues and wanting to live in a place where they could be self-sustaining. Living and working on a farm would be the perfect place they thought, and another bonus was that Steve’s three children from a previous marriage all happened to live in Minneapolis, so living in Red Oak would bring them closer to family.

It is known as Resilient Farms – a name Steve came up with- seen in many reports or other materials written when it comes to conservation, a passion for the couple.

“I’ve always been very conservation minded,” McQueon said. “Even in New York. I would see potato farmers there who got the first farm subsidies (from the government) to try to discourage urban development from taking all the land.People would complain about it, and I’d say, ‘don’t you realize how nice it is to have open spaces and greenery and food production right here in NY?’”

McQuown said her conservation ways run in the family.

“My great-grandfather put in some terraces on our farm, because part of the farm is very hilly, in the 1920’s before there were even soil and water conservation districts. He planted a huge evergreen windbreak that is still here.”

She said the farm has been no till since the 1980’s, and her dad put some ponds in at the farm in the 1950’s which they restored. They have a 40 foot buffer strip next to a creek on their farm, and started using cover crops in 2014. They participate in the Conservation Stewardship Program which takes into account every conservation program a producer has on their property, and then they get a payment based on that.

All this hard work hasn’t gone unnoticed as McQuown won the Conservation of the Year Award last year. She said her husband and a conservation assistant in the Montgomery County Soil and water office nominated her. She said it was a surprise to receive the award, but after she found out who nominated her, she wasn’t surprised they did. She was always going into the office to ask about conservation programs and became an assistant commissioner in the county’s soil and water district. She’s also on a state soil and water committee, appointed by the governor as a representative from the Southwest Iowa District.

“(I think the assistant thought)this woman is pretty obsessed (with conservation),” she said.

While McQuown doesn’t know where her path will take her next, she hopes the farm can go to a young family that wants to have their own farming tradition or “I’d love to see it become a best practices and learning farm.”