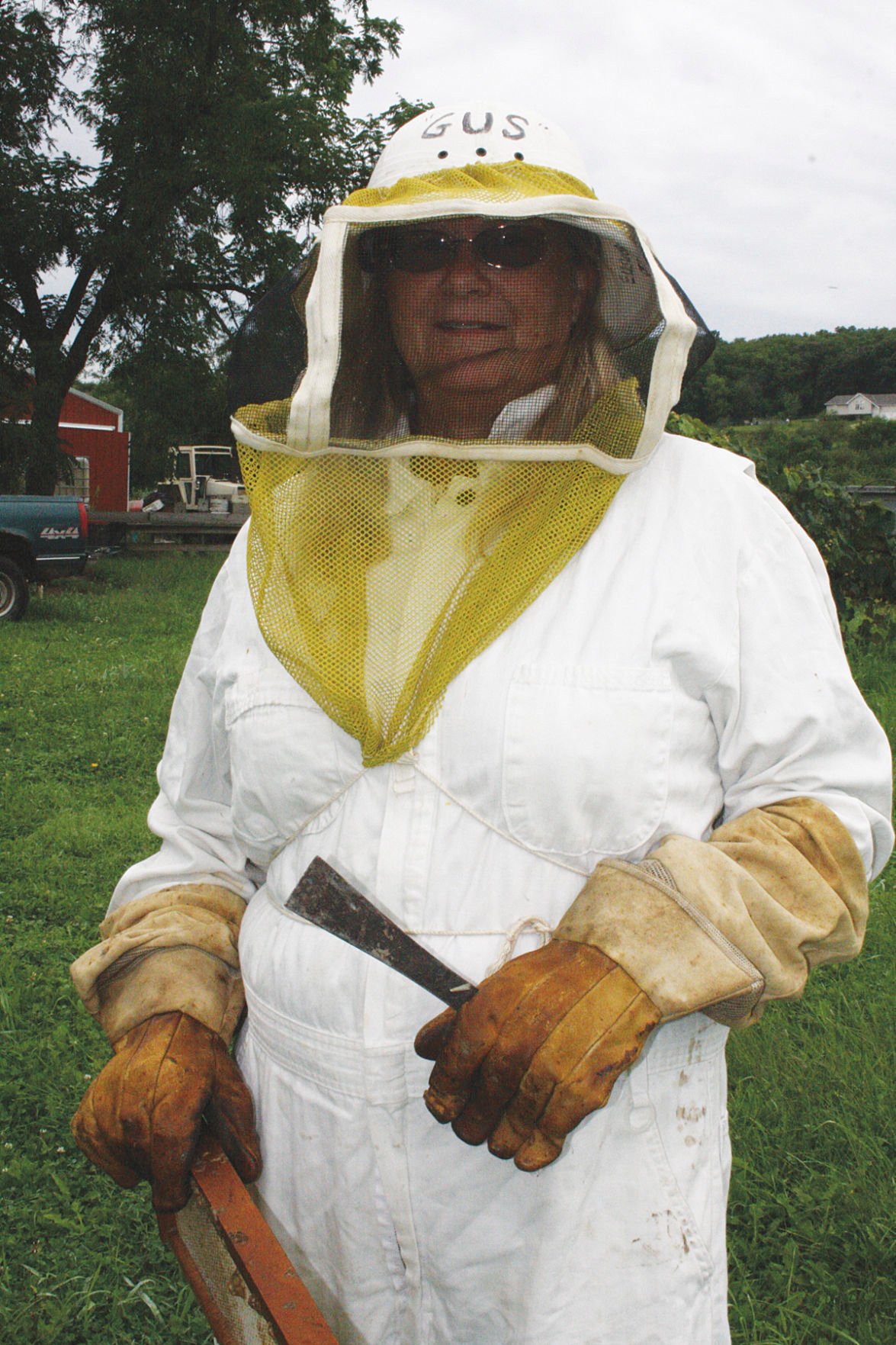 Suited up - Donna Brahms gets into the uniform of a bee keeper at the farm and orchard in Griswold. 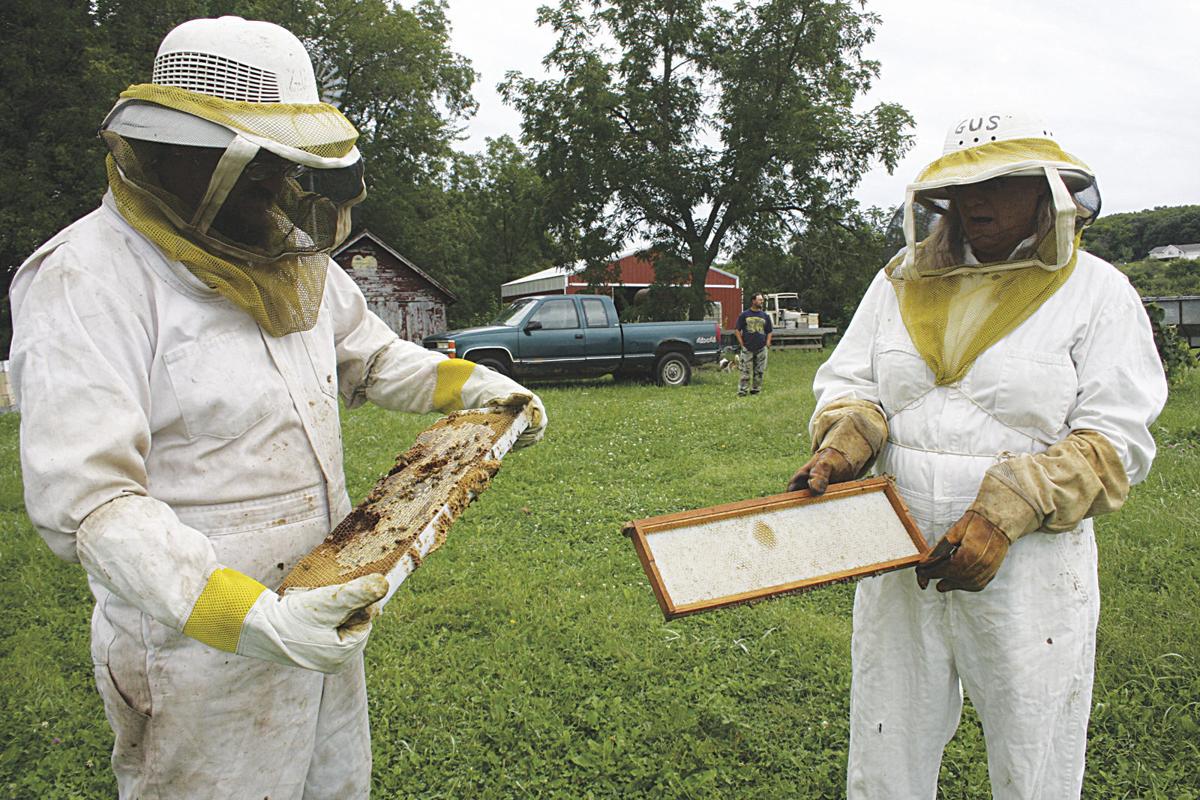 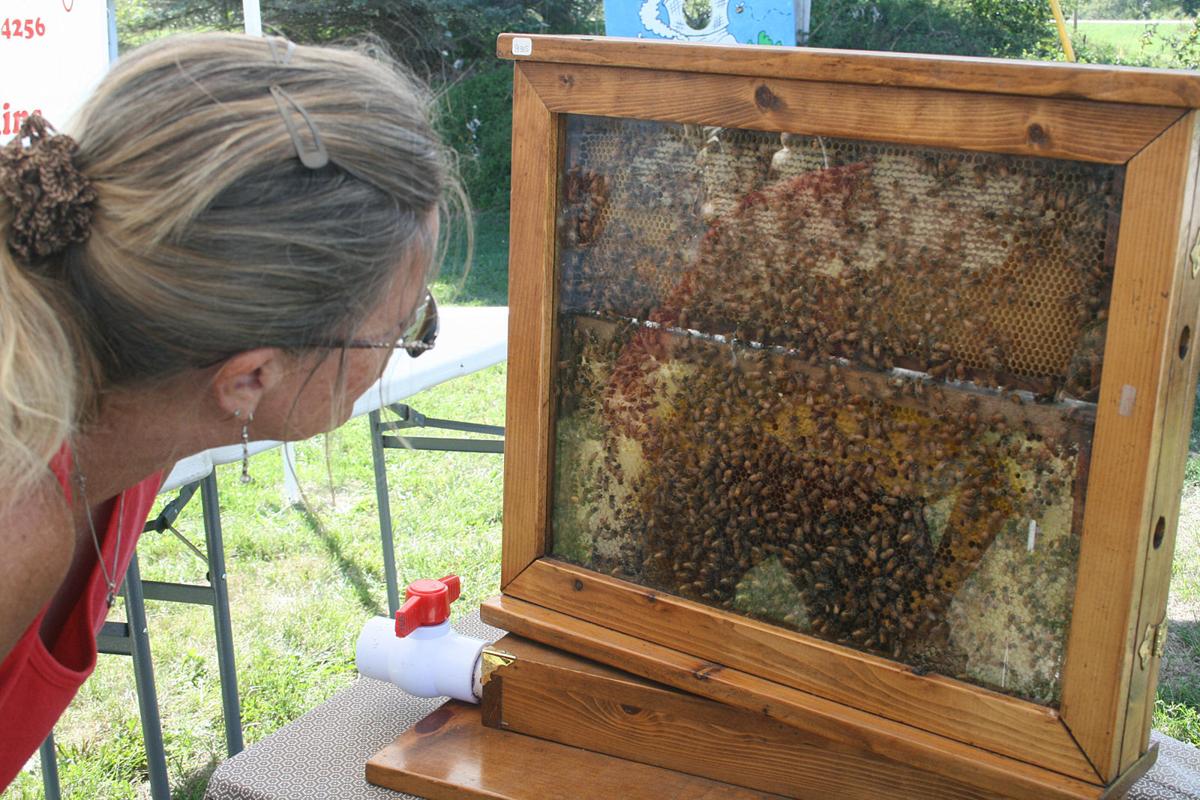 Donna Brahms likes to do educational presentations on the bees at the farm and orchard. 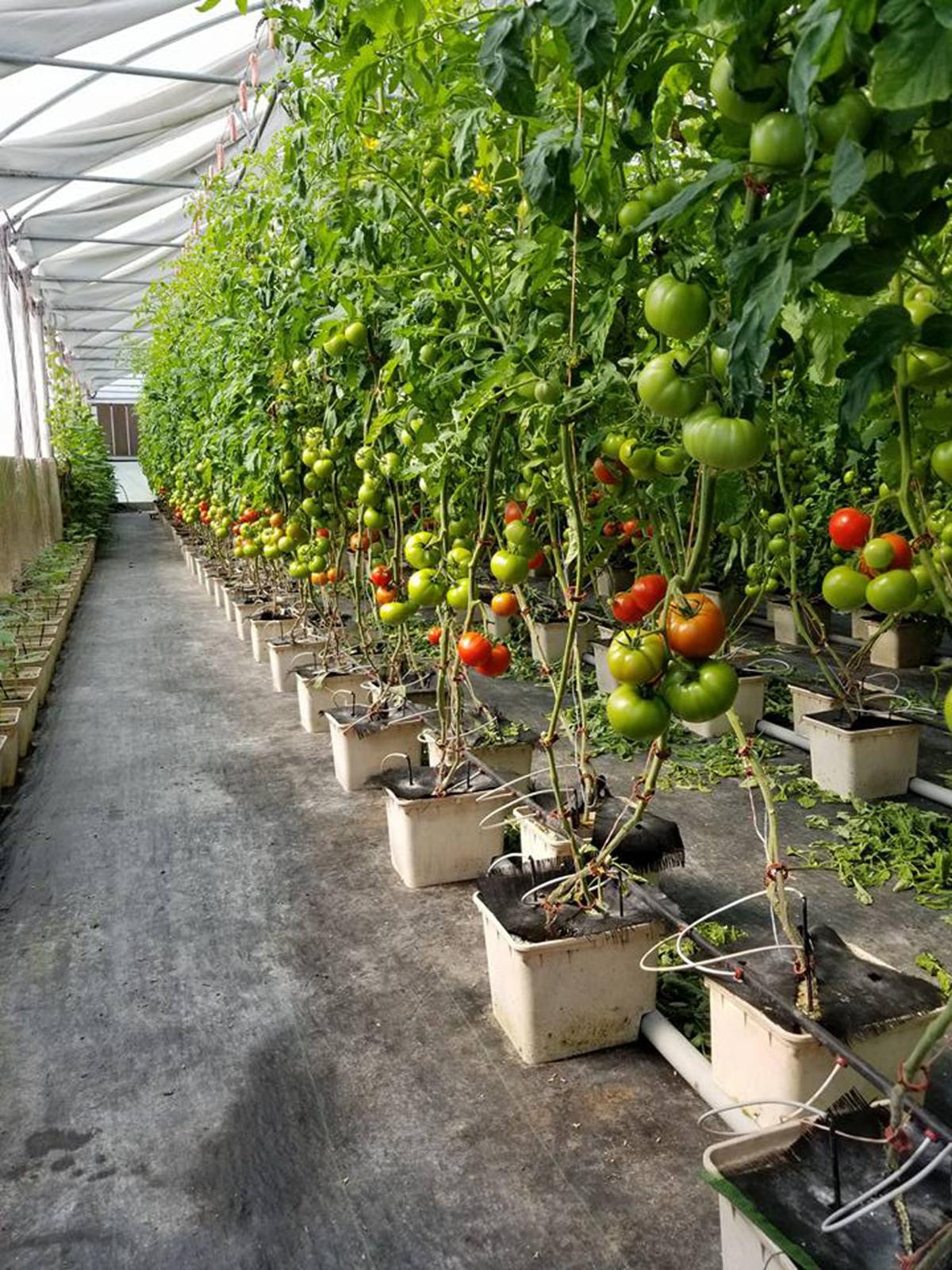 Tomatoes in the hydroponic greenhouse.

Suited up - Donna Brahms gets into the uniform of a bee keeper at the farm and orchard in Griswold.

Donna Brahms likes to do educational presentations on the bees at the farm and orchard.

Tomatoes in the hydroponic greenhouse.

GRISWOLD — Donna Brahms, of 3 Bee Farms Market and Orchard in Griswold, has a lot of workers out at the farm, and they’re busy helping with the production of a wide variety of items that are offered for sale at the farm and at farmer’s markets through out the year.

She’s always willing to talk about her special crew — and over the years she’s learned a lot about them: her bees, that is.

Donna and her husband Mike started keeping bees in the early 1990’s, “So I’ve been involved for quite a while,” she said. With the orchard and apple trees, gardens and 10 acres of vegetables, she said it was important to have the bees for pollination, and they also produce honey which she sells at the farm and at farmer’s markets in southwest Iowa.

This year she said she was concerned when the area got a late spring snow, “We were concerned for the apple trees when we got that snow,” she said, “But they bloomed really well, and then we waited to see if they got pollinated. I saw some bees on the blooms, so let’s hope that was enough.”

She said she enjoys working with the bees, “it’s a challenge,” and she likes being able to educate people about them. From school children to people coming to the orchard or farmer’s markets have lots of questions, she said.

The interest in bees runs though in family, Donna said her granddaughter, JoAnn, 16, is the Southwest Iowa Honey Queen, and gives presentations about bees as well. “She’s learning right along with the rest of us,” Donna said, “She’s a third generation bee keeper. It is kind of a family thing.”

Donna likes to explain that honey bees are a very important part of food production.

“Every third bite (we eat) is thanks to a honey bee,” she said, explaining that bees pollinate about 80 different food crops, including a lot of vine crops and some that are pollinated exclusively by honey bees.

Those who like to eat almonds should know that the nuts are among those crops pollinated exclusively by honey bees, and because so many are grown in California, there is a migration of bees to California over the winter. “I know several (bee keepers) in Iowa who send their bees out to California to pollinate,” she said.

Donna likes to share what she’s learned over the years with fellow bee keepers in southwest Iowa. “We’re in charge of the Southwest Iowa Bee Keeper group,” she said, holding meetings each year. They are also members of the Iowa Honey Producers Association — she said she wasn’t an officer anymore with the group, but does still attend annual meetings. “At least once a year we have the state apiarist come to southwest Iowa to talk,” to area bee keepers, she said.

She said she likes to stay informed but admitted with the growth of the farm and orchard side of the business, they aren’t as active as they had been.

She and family members work together on the farm and orchard. Their retail store is open every day in September and October, and is open Fridays once they start attending farmer’s markets.

Local foods and selling at farmer’s markets is another of her interests: 3 Bee Farms is represented at several farmer’s markets in the area, but this year may be a bit different, thanks to the coronavirus pandemic, which has resulted in restaurant closures and delays and cancellations of things like fairs and festivals.

Donna said one of the markets she goes to, the River City Market in Council Bluffs kicks off on Saturday, May 16, but a Thursday market there won’t start until June 11.

As the President of the Iowa Farmers Market Association — organized in 2002 by farmers across the state — she said she’s been trying to get farmer’s markets open for farmers and shoppers. “I’ve been working dilligently since March to get farmer’s markets deemed essential. Finally the Governor said we could start the markets,” she said, with some special requirements including social distancing, a lot of signs and limited offerings. For example, she said only farm and agriculture related products can be sold — no crafts, no music, no children’s activities. “I don’t know if that will last all summer, but I will take that,” she said.

They go to six markets — Creston on Mondays, Anita on Tuesdays, Avoca on Wednesdays, Council Bluffs on Thursdays and Saturdays, and come to Atlantic on Saturdays as well. “The Atlantic Farmer’s Market will just be on Saturdays, this year,” she said, from 9 a.m. to noon, starting June 6.

She admitted a few vendors who used to set up and sell other hand crafted items weren’t thrilled with the limits. “But we have to adapt,” she said.

She’s getting good at adapting, she said — for example, when she learned one of the vendors at local farmers markets wasn’t going to be bringing plants for sale, the family bought a green house and has been raising bedding plants and vegetables for sale.

This year there interest in growing your own food and planting gardens is up, she said. “Having bedding plants, flowers and veggies for sale has been going very well, it’s pretty much paid for the green house already.”

She also starts her tomato plants earlier than most gardeners — they grow tomatoes with hydroponics, “So we can be one of the first (vendors) who have tomatoes available. The people line up and just wait for the tomatoes,” she said.

She has 630 tomatoes growing in the hydroponic greenhouse right now. “Some of them are as big as softballs,” she said, “and starting to turn red.” The vines are over six feet tall. She also grows a few cucumbers and peppers in that greenhouse.

Their garden is producing as well, she said including asparagus, rhubarb and lettuce. “Our sweet corn is up, the beets, lettuce, spinach,” she said, all together the gardens produce everything from a to z — asparagus to zucchini.

They will be planting a pumpkin patch, and have already planted a corn maze.

She stays busy, as, well, one of those many workers in her hives. “We just keep working and adding things,” she said.

And while they raise bees, the three B’s in the farm name stands for three generations of the Brahms family, “It’s actually four (generations) now,” Donna said, “But we’re not going to change the name now.”

Some clouds. A stray shower or thunderstorm is possible. Low near 65F. Winds light and variable.

Sunshine and clouds mixed. A stray shower or thunderstorm is possible. High around 90F. Winds S at 5 to 10 mph.