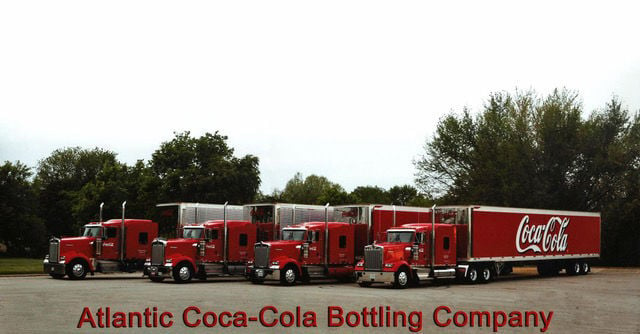 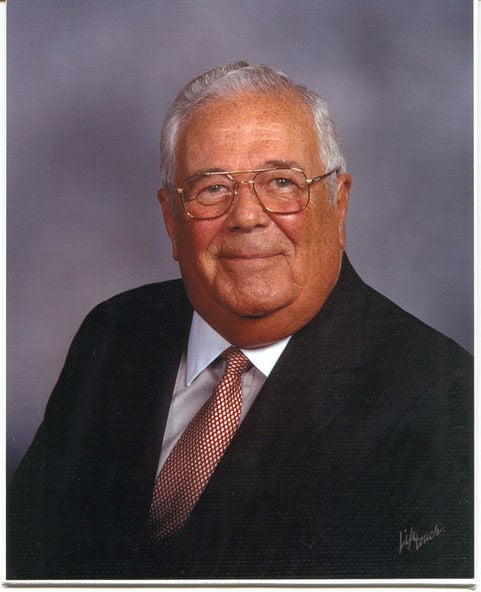 At right: Jim Tyler, who was thrilled with his birthday surprise.

Below: Some of the fleet of Atlantic Bottling Company trucks.

How do you surprise a 96-year-old man on his birthday with a great gift when he lives in an assisted living facility? The birthday boy, Jim Tyler, didn’t need any more stuff for sure, his family agreed. So the Tyler family, owners of Atlantic Bottling Company, got together and decided to really surprise their father and grandfather this year. After they had asked themselves what “dad” would really like, they spent the next several months making it happen.

As a result, the company has reclaimed Villisca into their business’s territory!

Beginning on Oct. 31 this year, the big red trucks of Atlantic Bottling Company, which is owned by the Tyler family who got their start in Villisca, will head south toward Villisca for the first time since the Tyler brothers, Harry and Henry, split the company into two companies back in 1949. In the friendly break-up of the company, Villisca and the surrounding region were shuffled off to an Omaha bottling and distribution company and Villisca lost its connection to the Tyler family. Except of course the connection remains in the hearts, minds and memories of many of Villisca’s citizens all these years later.

Similarly, Jim Tyler has always retained a warm spot in his heart for Villisca. He is a 1942 graduate of Villisca High School and to this day is an avid reader of The Villisca Review and Stanton Viking. When his family gave him his 96th year birthday present he made them promise to tell Villisca first!

Under the new agreement, the company will sell, deliver and merchandise their Coca-Cola products in Villisca as well as in Clarinda and Bedford. When the Tyler Brothers bought a creamery in Clarinda in 1915, they had discovered in the company’s safe a contract for a Coca-Cola franchise. They were already selling soft drinks under the Tyler brand from the Villisca plant, but the Coke contract helped propel them to a whole new business level.

Kirk Tyler, Jim’s son who is Chairman and CEO of the company, said Atlantic Bottling made his father’s birthday present happen by trading some of the company’s northwest Iowa territory to the Omaha company for Villisca and the other towns which had been included in its service region since 1949.

His dad was thrilled with his surprise present, Tyler said, adding “It was a lot of fun making this happen for him.”

Villisca residents should keep an eye out for the big red Coca-Cola trucks with Atlantic Bottling Co. printed on the side. The Tylers are headed back to town!