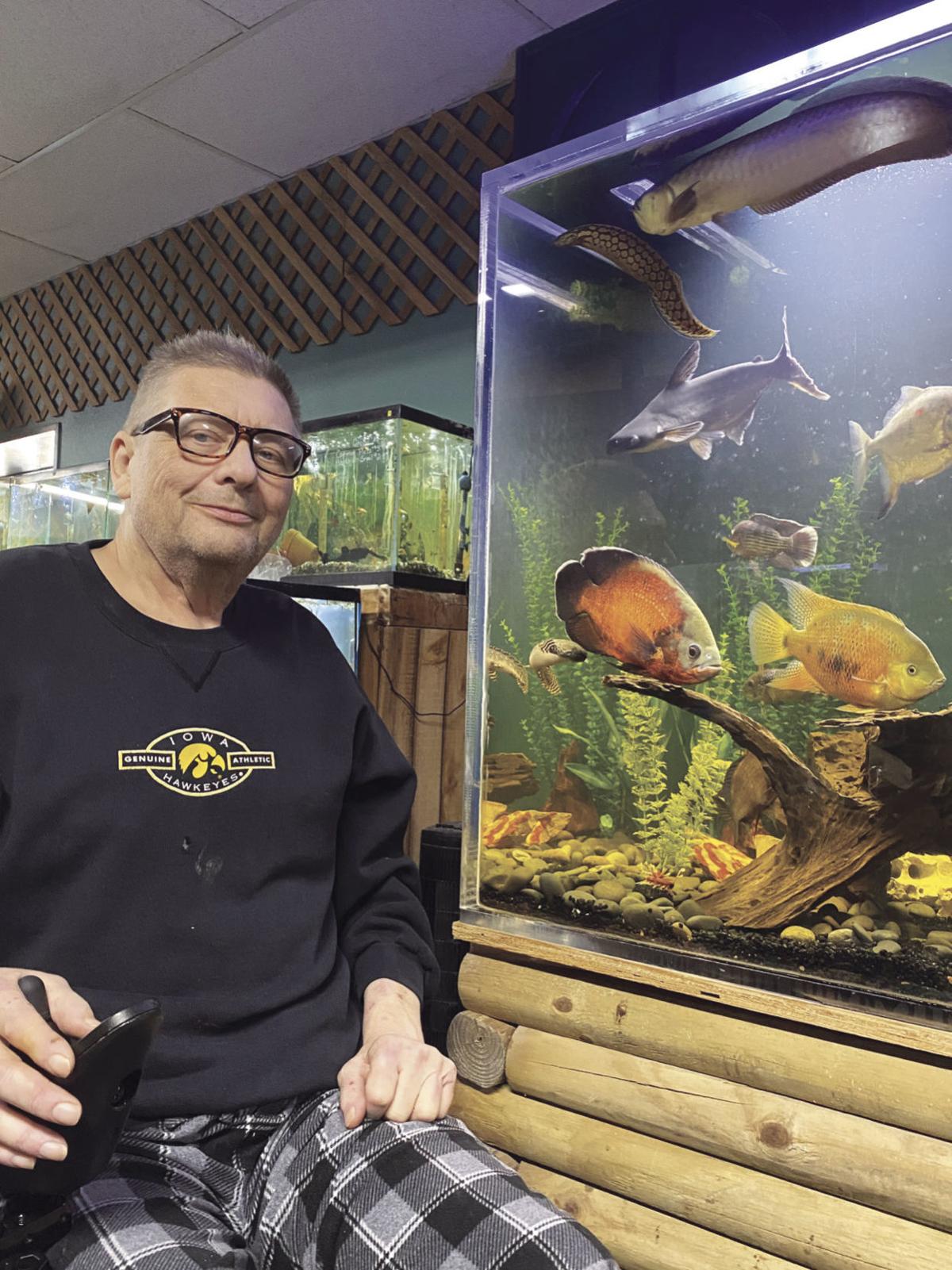 Rick Johnson and the largest of his fish tanks — this one holds 540 gallons of water, and a variety of larger fish. 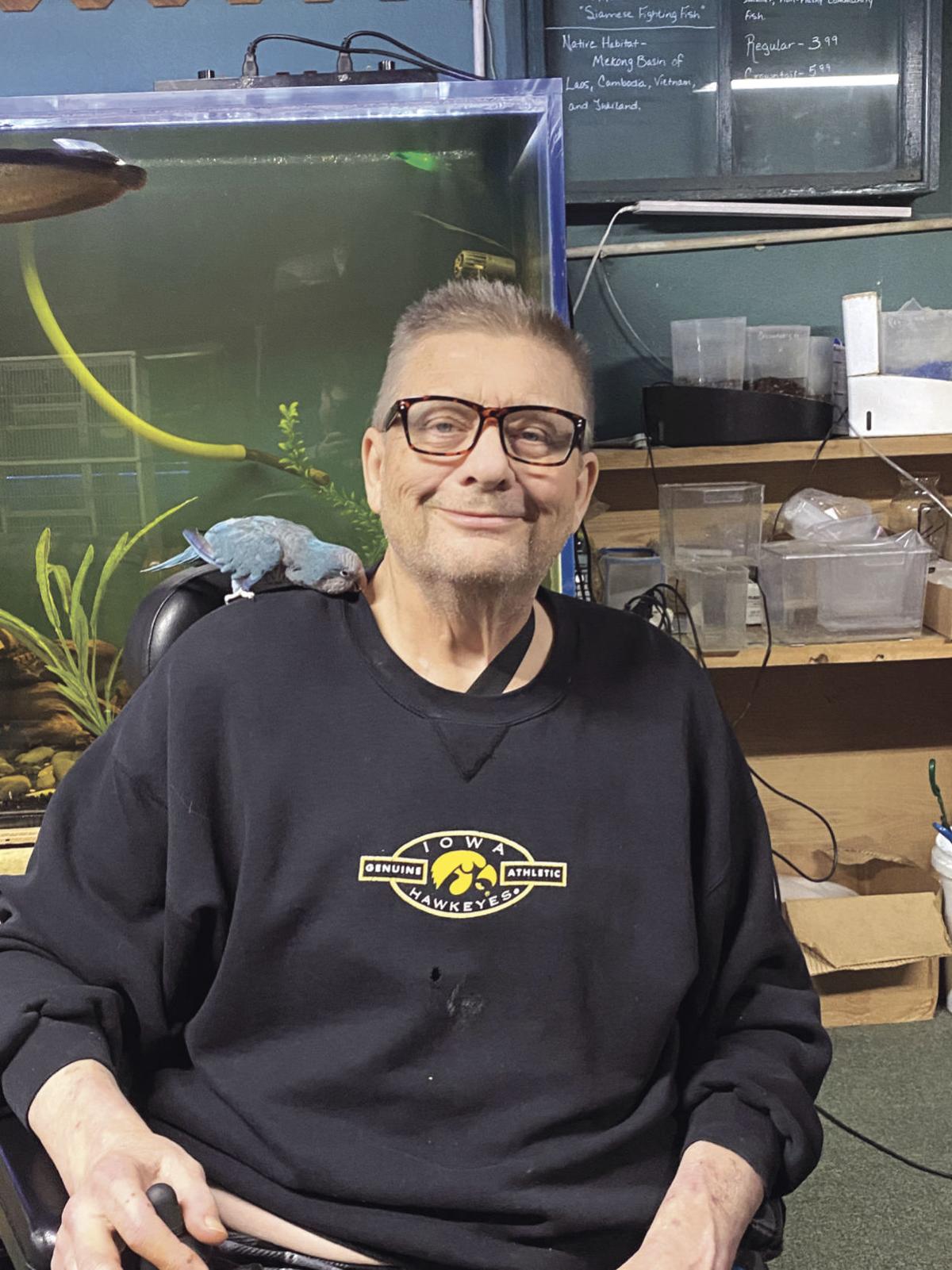 Rick Johnson and one of the store’s birds, “Dum Dum” a blue Quaker parakeet. 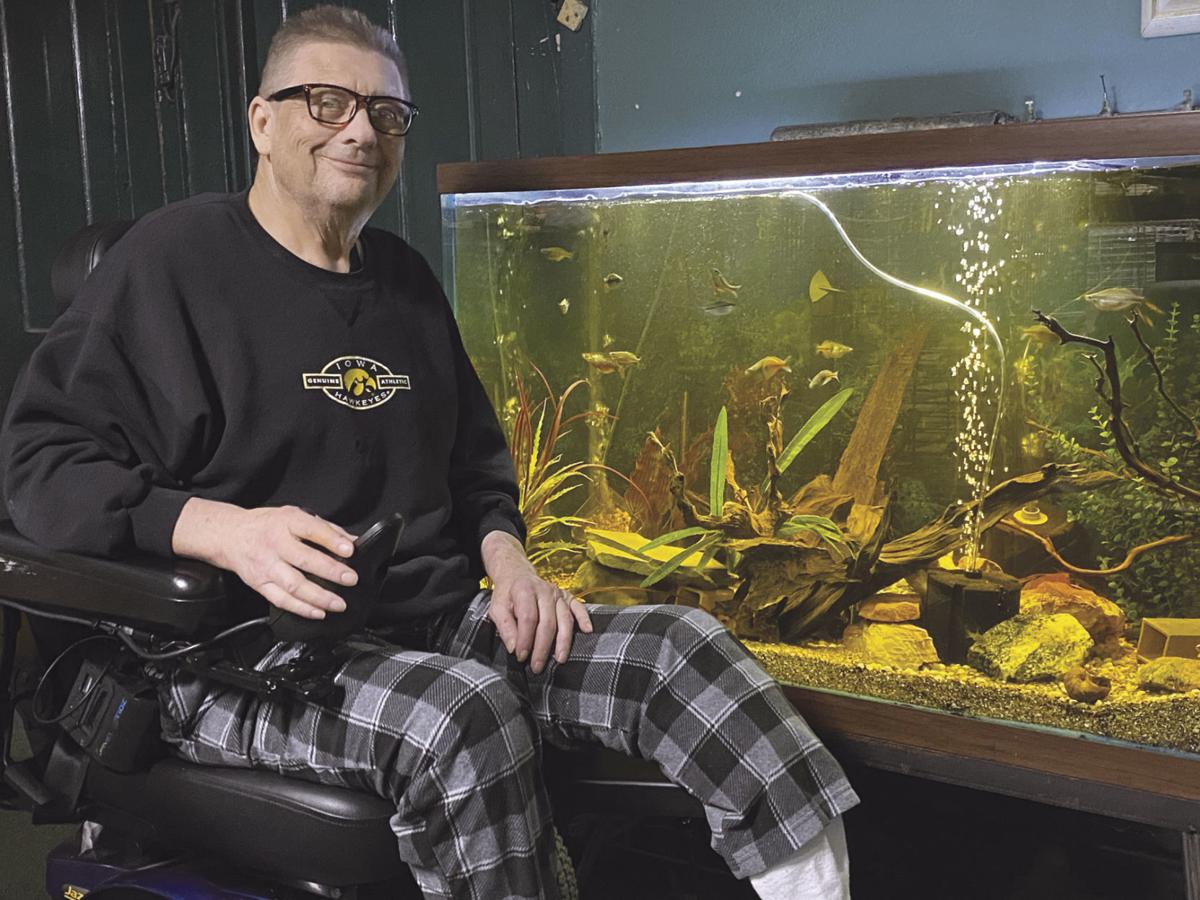 Rick Johnson has been in business with The Fish Store since 1988.

Rick Johnson and the largest of his fish tanks — this one holds 540 gallons of water, and a variety of larger fish.

Rick Johnson and one of the store’s birds, “Dum Dum” a blue Quaker parakeet.

Rick Johnson has been in business with The Fish Store since 1988.

ATLANTIC - Some people love fishing. For Rick Johnson of Atlantic, it was the fish that caught him.

If you have an aquarium in your home, or another pet of any kind, you probably know Rick — he owns and operates The Fish Store in Atlantic and has been there since 1988.

Rick explained that in the 1970’s, a friend’s six foot long fish tank caught his attention.

“I never had a tank as a child,” he said, but what his friend had in that tank was what really interested him. “It was a certain kind of fish that caught me,” unusual cichlids, “and that has attracted people to my store over the years, because they were not sold in most stores.”

He also likes exotic bottom dwelling scavenger fish, but says many species are getting hard to get.

“They are getting rare and expensive because their habitat is getting destroyed in South America, in Brazil and Columbia, and it’s getting tougher to get them out of the wild,” he said because some are on an endangered species list. Some are being bred in captivity but he said the exotic ones can go up to $1,000 each. “I have them from $6 up to a couple hundred dollars,” he said.

His biggest tank holds 540 gallons of water, and a group of large fish including a large silver Arrowana and a large Knifefish. He walked up to the tank, several swam up to him, “They know me,” he said.

A second tank holds 300 gallons, and is home to one of those bottom scavengers Rick likes — a catfish that he said is over 25 years old.

For fish enthusiasts, Rick can help with questions, has the different foods some fish need, and has accessories for tanks as well.

Along with fish and tanks, Rick offers supplies and food of all kinds for pets, like premium dog and cat food, and supplies for other pets.

“Not as much as I’d wish,” he said, “I just don’t have the room for all the stuff out there,” but he said he could get things he doesn’t have in stock.

While many have turned to ordering pet supplies over the internet, the advantage of The Fish Store is Rick himself.

People come back over and over, and for him, that’s one of the best parts of the job, “knowing all of those people for all those years. Some of the same people have supported me all that time.”

Running a pet shop, Rick says, “is kind of a job that’s not a job.”

He admits it’s not a job you will get rich at, but it’s rewarding.

It’s hard to get a day off, though, with so many animals and tanks to take care for. “Vacations are few and far between,” he admitted.

Currently he has a couple people helping out at the store. Due to health issues, he had part of his leg amputated about two weeks ago.

“I just got home Friday,” he said, adding, “I have a couple gals helping me out,” before he gets a prosthetic leg, which will be a while, “But I feel good, I feel real good,” and he’s had a bunch of well wishers coming in to see him.

“I’ve been doing this for about half my life,” he said, looking back, “Wow, true story, I am getting old,” he joked, “Look how fast (time) goes.”

Spiders are one of the things he doesn’t carry. “I’m not crazy about spiders, I don’t want any spiders.”

He’s also not crazy about “anything that could bite or sting me,” and usually doesn’t carry snakes. “I know some people love them,” he said, “But the biggest part of my business are women, and they ask, ‘You don’t carry snakes, do you?’”

He said he orders a lot of things from Florida and a lot of it is delivered right to his door. “I get a lot of things through Southwest Air,” he said, “and they won’t carry snakes.”

While there are risks to shipping any live animals, Rick has a theory why some airlines don’t want to handle snakes. “I think they saw Snakes on a Plane, and they freaked out,” he said. “I never did see that movie, but I know just from the name alone, I should have watched it.”

He does have birds again — for about 10 years of the business he didn’t carry them but now with a little extra help, he was back into carrying them. He works with them so that they are used to being handled. He’s had hand raised babies, but also adult birds that ended up coming back to the pet shop for a variety of reasons.

And there are some things he doesn’t carry.

“There are things I won’t sell,” he said. “I don’t want people to buy (some animals) on impulse. Some creatures get so big they outlive their environment. I try to stay away from those things.”

Potbelly pigs, for example, are cute as babies but can get very large. Some fish will keep growing and outgrow their tanks, “and you can’t just throw them out (into the lake), they will die in the winter.”

“Some things just get too big,” he said.

He does have “feeder” animals, like crickets, fish, mice, mealworms, even Dubai roaches, “There are a lot of different foods out there,” he said.

Both are used to being around all the other animals. Rick said the first time the dog saw a bird fly in the pet store, it started in that direction. “I screamed at him and he stopped, and he’s never (gone after birds) since.” The cat is also not interested in the fish tanks or the birds. “My cat had a bird land on him, he just looked at it, like ‘Get off me!’”

Running a pet shop in a small town can be a challenge. “There are hardly any independant (pet stores) left,” he said, “But I carry stuff that the big stores don’t want to get,” and he’s always happy to tell you whatever you need to know about caring for your pet.

Some clouds in the morning will give way to mainly sunny skies for the afternoon. High 77F. Winds W at 10 to 20 mph.