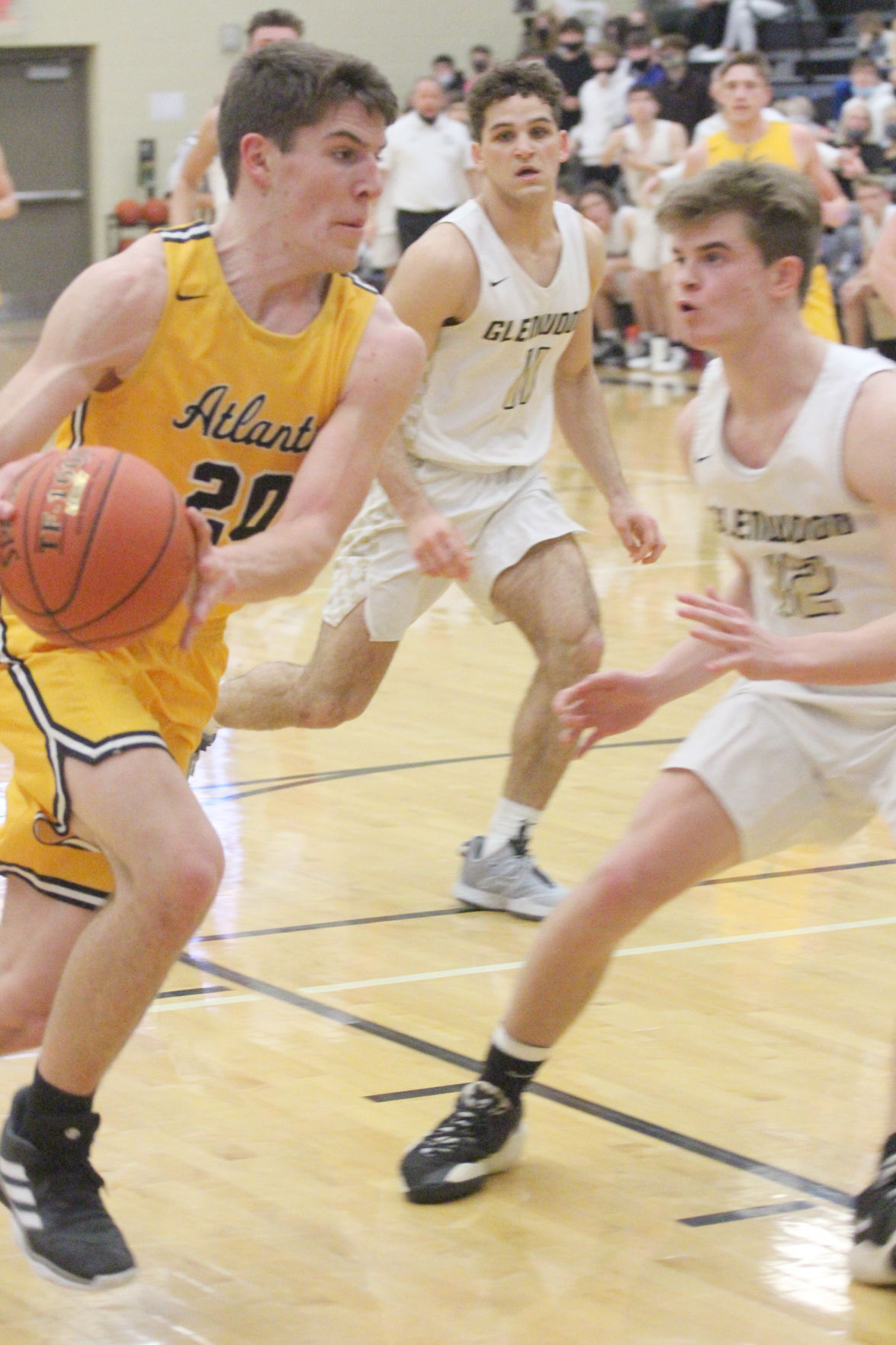 Ethan Williams moves in for a basket for Atlantic. 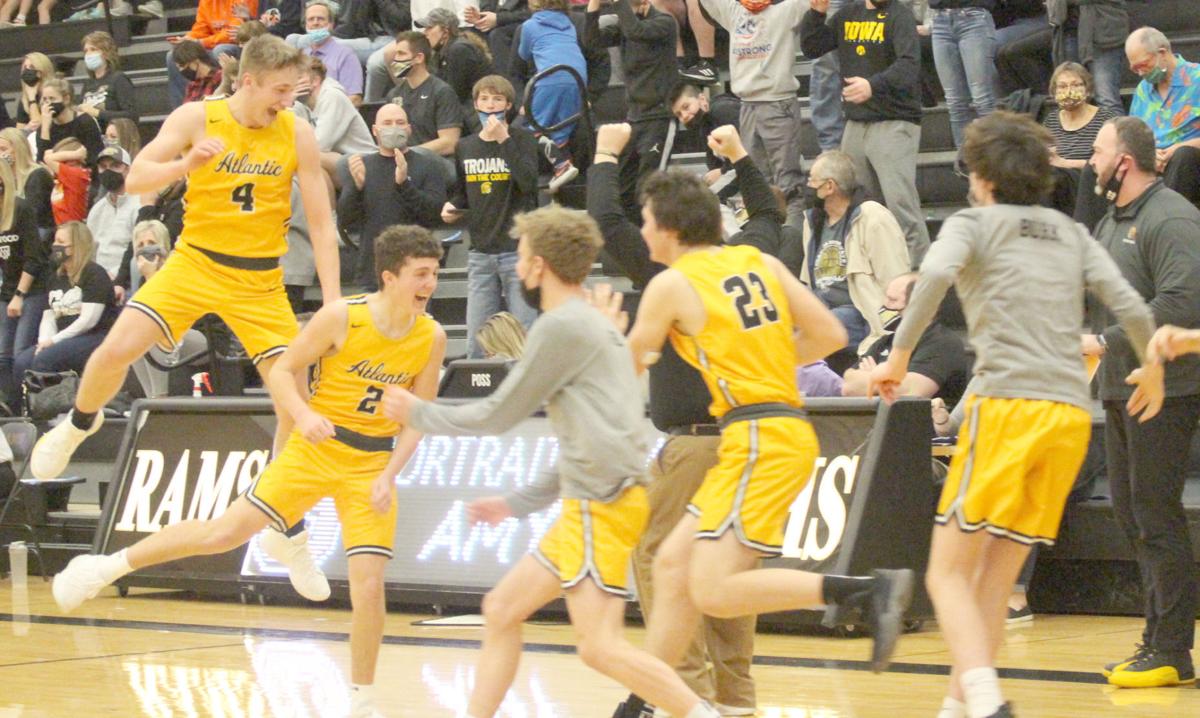 Atlantic players celebrate as the final second expires from the clock in a 63-59 win over Glenwood in Thursday’s Iowa Class 3A substate semifinal in Glenwood. 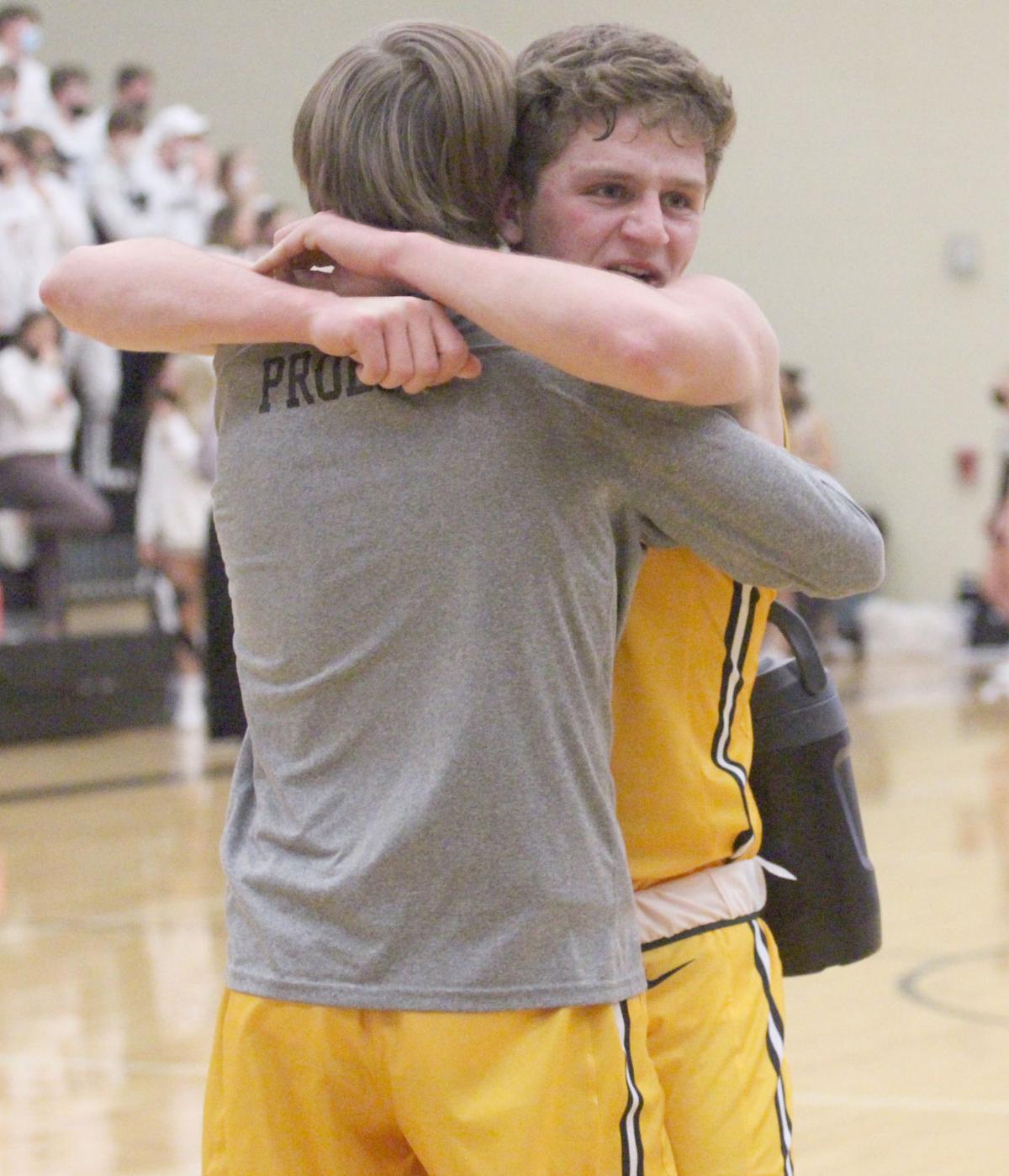 Atlantic’s Dayton Templeton hugs teammate Jayden Proehl during the post-game celebration after the Trojans sprung a 63-59 win over Glenwood in an Iowa Class 3A substate semifinal Thursday, Feb. 25, in Glenwood. 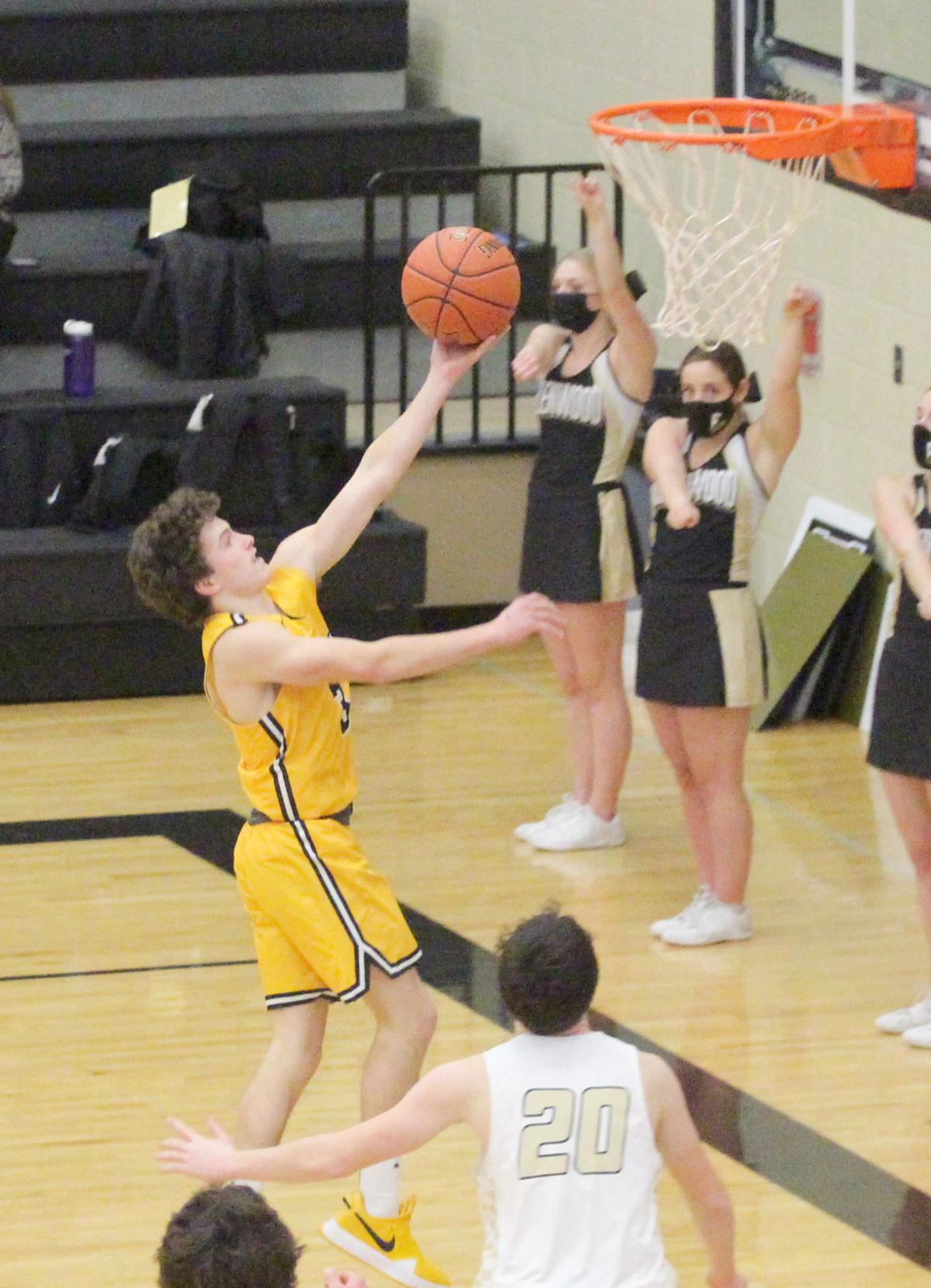 Atlantic’s Grant Sturm goes in for a layup against Glenwood.

Ethan Williams moves in for a basket for Atlantic.

Atlantic players celebrate as the final second expires from the clock in a 63-59 win over Glenwood in Thursday’s Iowa Class 3A substate semifinal in Glenwood.

Atlantic’s Dayton Templeton hugs teammate Jayden Proehl during the post-game celebration after the Trojans sprung a 63-59 win over Glenwood in an Iowa Class 3A substate semifinal Thursday, Feb. 25, in Glenwood.

Atlantic’s Grant Sturm goes in for a layup against Glenwood.

GLENWOOD – It doesn’t get any more exciting than this.

The Iowa Class 3A substate semifinal game on the line and the chance to make it a two-possession game with 5.2 seconds left, Grant Sturm came through again for Atlantic.

One of the Trojans’ best athletes in this year’s senior class, he missed on the first attempt with his team holding a 62-59 lead.

He didn’t miss on the second.

And it would have taken a miracle for Glenwood (20-3) to score that quickly and, with no time outs remaining, pull a rabbit out of their hat.

Yes, the Trojans (14-6) held on, and pulled out arguably coach Jeff Ebling’s biggest victory in his three seasons as head coach with a stunning 63-59 win over the state’s sixth-ranked Rams on their home floor.

“It feels great. We’re going to work hard these next couple of days in practice and play hard who we’re playing on Monday,” said Sturm.

“Feels great to knock them off on their home floor,” added fellow senior Skyler Handlos. “I give them a lot of credit, and we just came out and rebounded the ball and pushed the ball.”

By the way, did we mention this is the first season, at least in awhile, that the Trojans have beaten every one of their Hawkeye Ten Conference opponents at least once?

That said, the Trojans will have a big task ahead of them as they head to their first substate game in four years: No. 2-ranked Dallas Center-Grimes, to be played 7 p.m. Monday at a site yet to be announced. The Mustangs got by ADM 39-34 in the other Substate 8 semifinal.

The prize is the biggest of them all: One of eight spots in the Iowa Class 3A state basketball tournament, the Trojans last advancing there in 2017.

Atlantic had lost to Glenwood, the team with which they shared the Hawkeye Ten Conference title, twice this season, 56-41 and 56-48. But the second time around, the Trojans were without Handlos, who was injured, but played the Rams tough in what arguably was their best game to that point in the season.

This time, in what was a game of runs, and in the end, it was the Trojans who had the final run and got the win that mattered.

Glenwood scored the game’s first four points, but Atlantic went on a 12-2 run and led 20-14 after the first quarter. The Rams came back and took an eventual six point lead before settling for a 35-32 halftime edge.

Then Atlantic came right back, punctuating another run off a Handlos slam dunk off a Sturm steal and assist.

The Rams, carried by senior and Wayne State signee Ryan Blum and his amazing 37-point night, went on another run and took a 49-48 lead early in the fourth quarter, but the Trojans managed to foul the Rams.

They made them pay, going 12-of-16 at the free-throw line to pull off the win.

The Trojans needed those free throws, particularly since it came down to a one-possession game in the final 30 seconds. Sturm missed on two attempts, but after the Rams’ Peyton Maxwell missed a potential game-tying three-point shot with under 10 seconds left, they were forced to foul. This time, Sturm connected on just one, but it was big.

“I was just trying to stay calm. I wasn’t missing left or right but it was short or long. I ended up making the one that mattered,” said Sturm.

His younger brother, Ethan, connected on a couple of three-point shots that also proved to be vital down the stretch.

Handlos, who led with 22 points, matched up well with his high-scoring counterpart, Blum.

“I just had to stay with him the whole game and we just had to play defense and we made our free throws down the stretch,” said Handlos. “Ethan Sturm hit a three to put us up by four and that was the turning point in the game. We have so much confidence in that kid. He’s a great player and shooter and he stepped up really big tonight.”

Grant Sturm added 13 and Ethan Sturm had eight. Dayton Templeton had 10. Blum and his 37 was the only double figures for the Rams.

But, “The boys played tremendously,” he said. “They did a great job knowing their assignments and knowing what they had to do. Ryan Blum is a tremendous player and I was really impressed with how he carried them and to be able to get this win on their floor and get to move on in substate is just a dream come true for these guys.

“We say one more game and we’re going to be excited on Monday night.”

Indeed, there is one more game for Atlantic, and it could be one that will punch a ticket to the big dance in Des Moines.