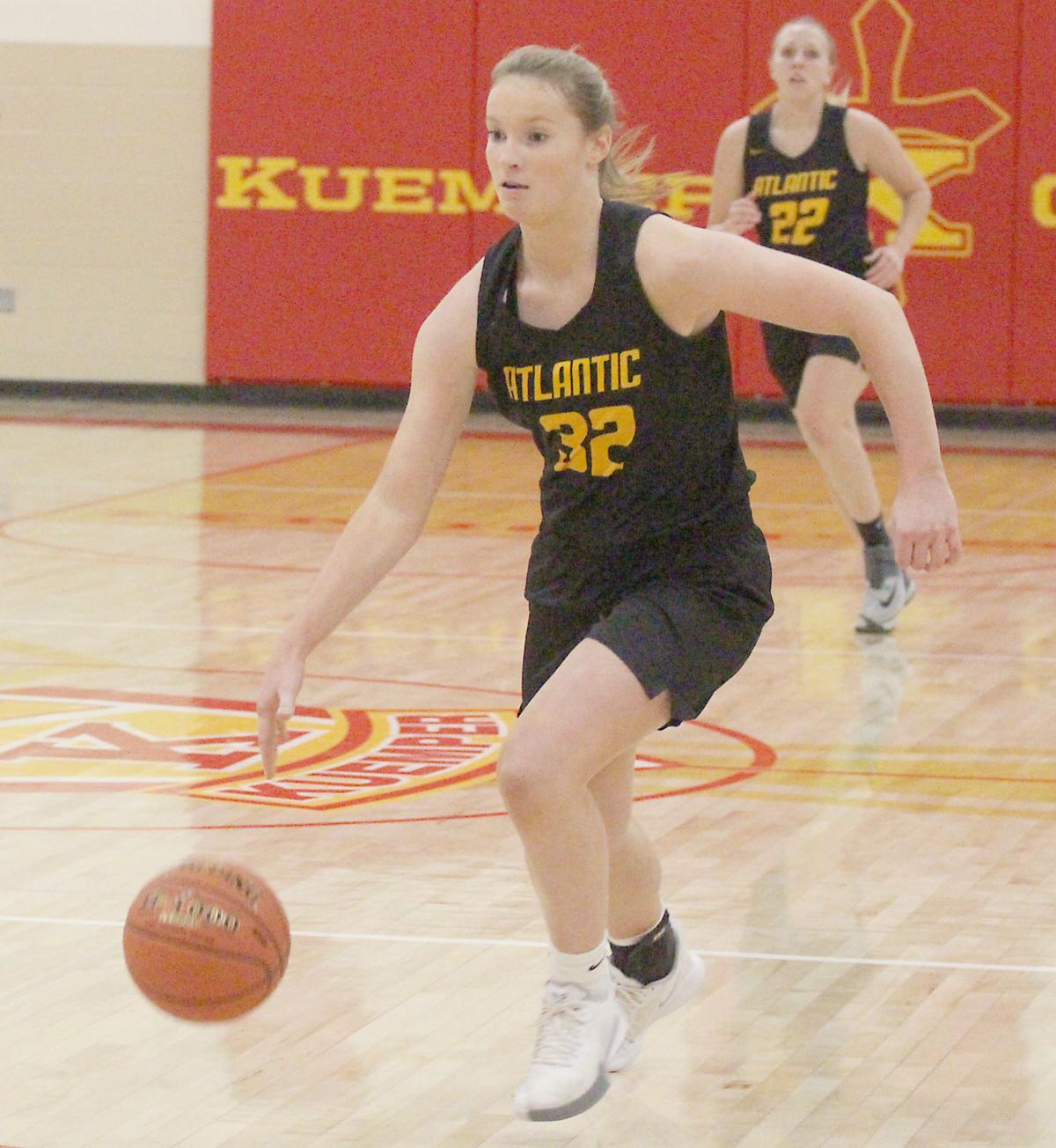 Jada Jensen goes on a fast break for two of her 20 points for Atlantic in a 63-33 win over Carroll Kuemper Catholic Friday, Jan. 8, at Carroll. 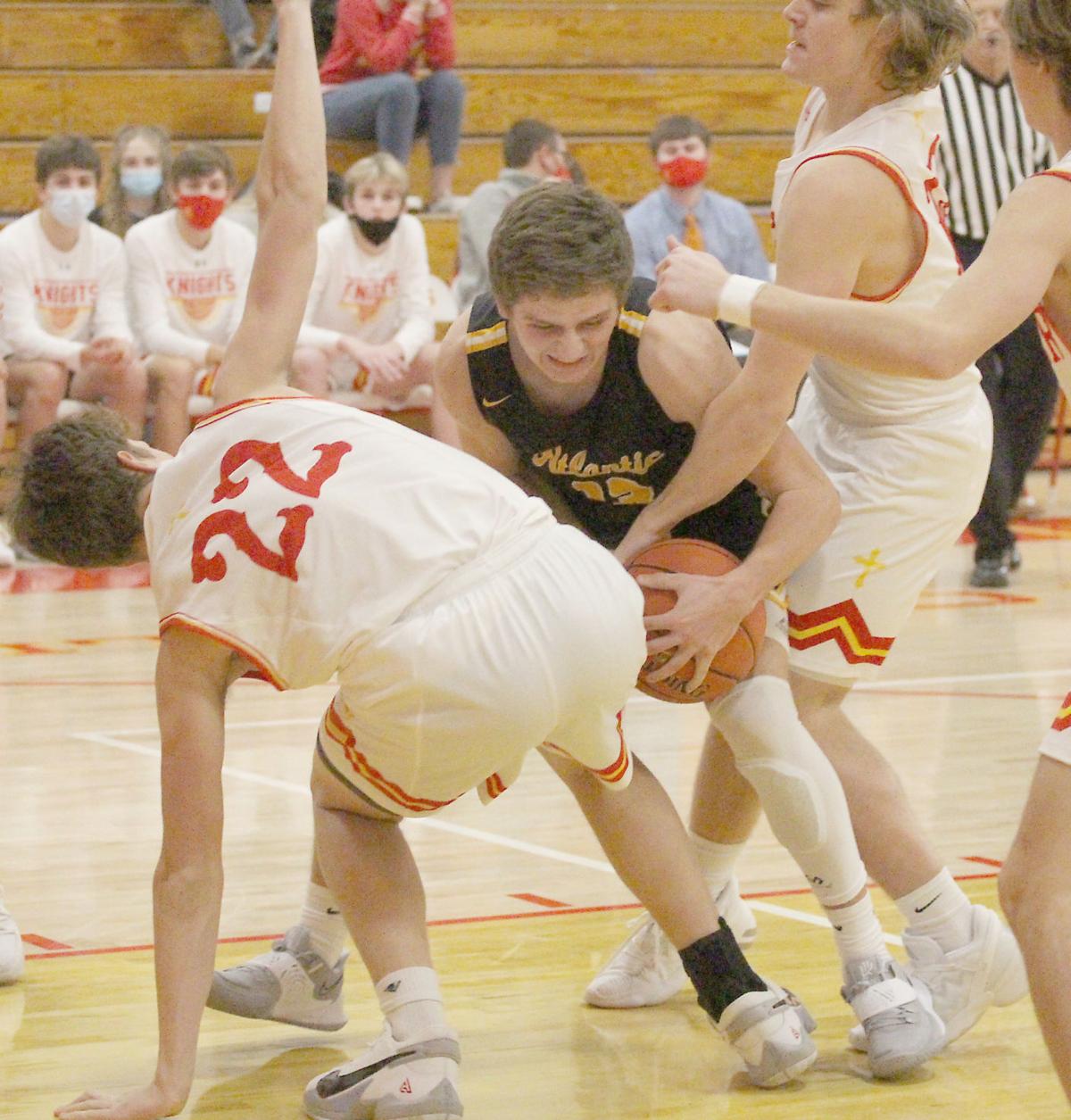 Dayton Templeton protects the ball during the first half of Atlantic’s game with Carroll Kuemper Catholic. The Trojans built an early 20-point lead and held off the Knights’ comeback rally to win 65-58 Friday, Jan. 8, in Carroll.

Jada Jensen goes on a fast break for two of her 20 points for Atlantic in a 63-33 win over Carroll Kuemper Catholic Friday, Jan. 8, at Carroll.

Dayton Templeton protects the ball during the first half of Atlantic’s game with Carroll Kuemper Catholic. The Trojans built an early 20-point lead and held off the Knights’ comeback rally to win 65-58 Friday, Jan. 8, in Carroll.

One team used that lead to coast to the big win.

The other had to hold on for dear life as the Knights made a furious second-half comeback.

The team winning big was the Atlantic girls, who now have four wins in a row over the Knights. On the strength of multiple steals that turned into baskets, the Trojans cruised to a 63-33 victory and their fourth win of the year.

The Trojan boys built a 20-point lead on the strength of six three-point shots in the second quarter before the Knights charged back and cut the lead to as little as four before the Trojans finally made free throws to seal the 65-58 victory.

It was a night to get a lot of steals, and the Trojans got many of them off the 20 turnovers they forced.

Jada Jensen was a key part of the effort, particularly in the second quarter where the game was decided. The Trojan sophomore, who is playing with more and more confidence each time out, got six points off three straight turnovers that led to fast-break baskets.

“Just having a good team around me and being able to communicate helps with the deflections and steals and they just add up,” said Jensen, who ended with a career-high 20 points. “That just adds to the confidence of the team.”

The Trojans built a quick 12-point lead to open the game before the Knights cut the advantage to just four late in the first quarter before the score settled at 16-10 after the first eight minutes.

But with the second-quarter defensive effort the Trojans turned their lead into a 36-19 edge at halftime, and the lead was built to as much as 34 midway through the fourth quarter before both teams emptied their benches.

Haley Rasmussen ended with 19 points to complement Jensen’s game. She sparked a defense that held all of the Kuemper players to single digits.

“I thought we did a great job defensively and doing what we needed to do,” said coach Dan Vargason, whose team improved to 4-6 on the year. “Everybody, all five girls did their jobs. The back-two girls took away sideline so our top three girls could generate steals.”

Vargason also thought Taylor McCreedy and Maycie Waters played some of their best basketball of the year, as did Lauren Nicholas.

“One thing I want to emphasize tonight is people knowing their role,” said Vargason. “Tessa Grooms, from a starter to playing five minutes tonight because of the matchup, she was a great teammate. She was on the sideline and cheering on her teammates. She didn’t do anything wrong, everyone was just playing really well and we liked the matchup.”

The Trojans will continue to work on communication in anticipation of a home game Tuesday against Clarinda.

The Trojans went back-and-forth with the Knights in the first quarter before Dayton Templeton’s bucket with seconds left gave the Trojans a 16-14 edge and a lead they’d never give up.

The six three-pointers were part of a 20-2 run that gave Atlantic a 36-16 lead with three minutes left. The Knights then began a slow comeback effort, first cutting the lead to 12 at halftime, at 39-27, before the Trojans built the lead back to 16 early in the second quarter.

Kuemper then made a furious comeback. Charged by their student section – allowed, thanks to relaxed restrictions per the Iowa Governor’s office – the Knights cut the lead to as little as four before Craig Alan Becker got the game back under control with a basket off a feed from Caden Andersen to make it 64-58 with under 10 seconds left.

The Knights fouled on offense trying to cut their deficit to three, but fouled, and Andersen drained the back half of a two-shot foul to seal the win.

The Trojans (3-4) were led by Grant Sturm’s 18 points, keying the second-quarter hot shooting spurt. Skyler Handlos came off the bench to add 16 and Dayton Templeton added 14.