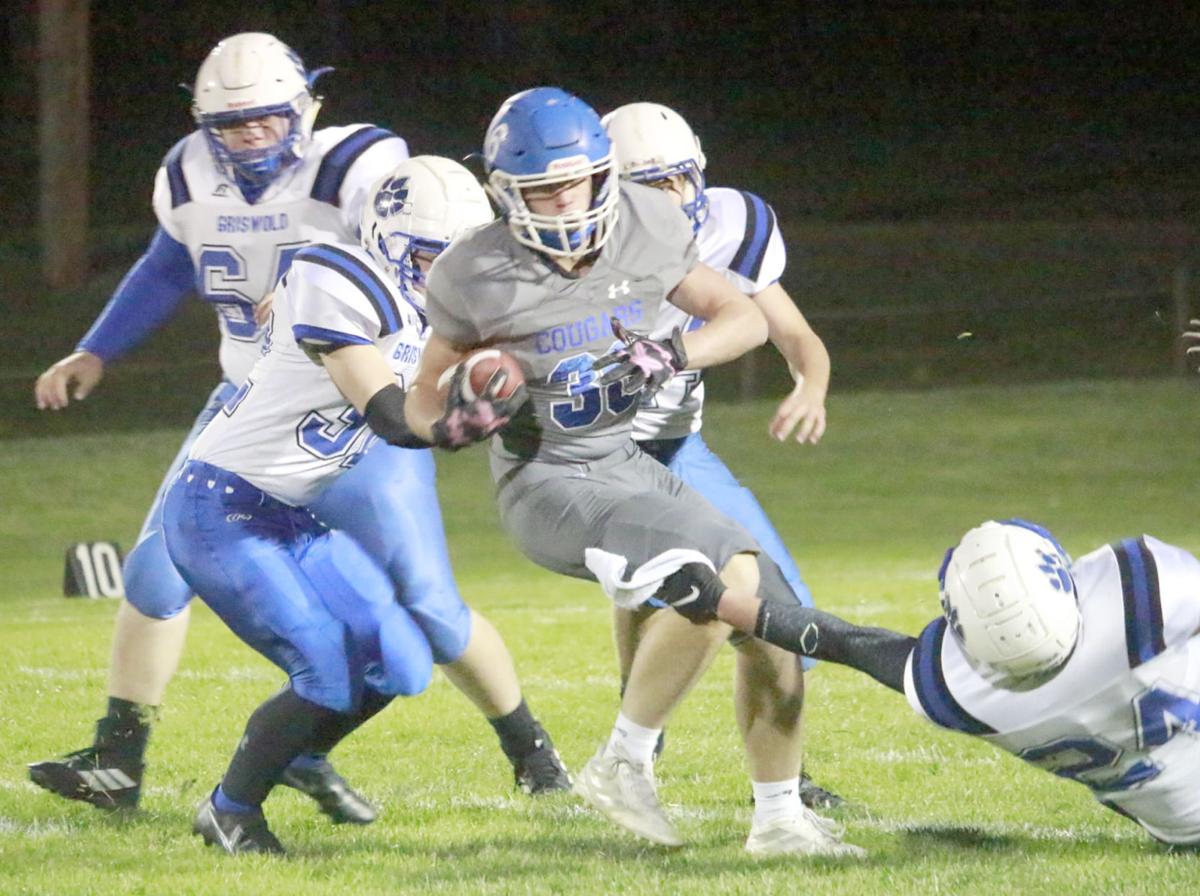 A group of Griswold defensive men tries to bring down CAM’s Colby Rich during the Cougars’ 67-18 victory Friday, Oct. 16, at Anita. 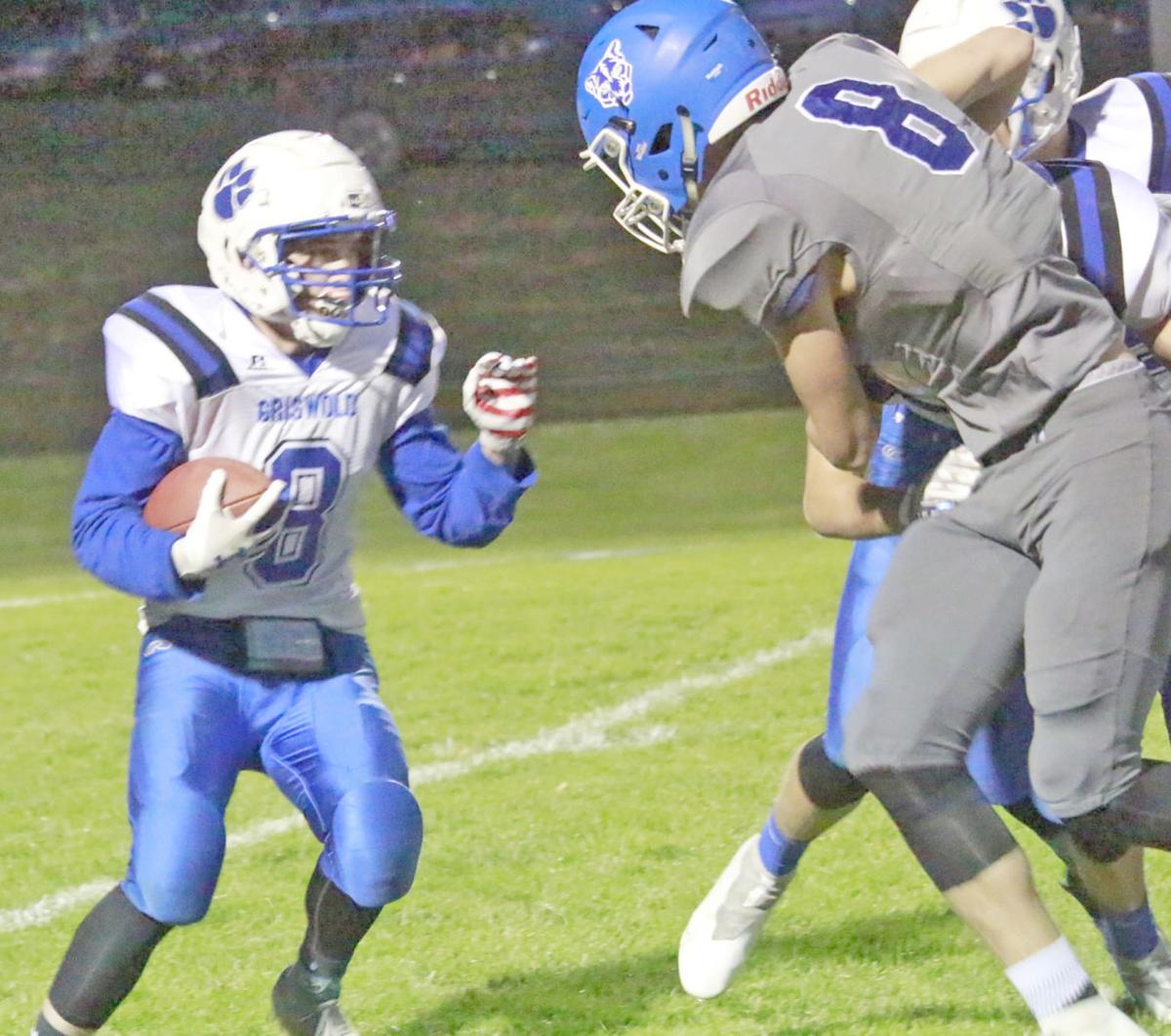 8 vs. 8 on this play – Griswold’s Cale Swain tries to dodge CAM defensive back Sam Foreman during first-round playoff action Friday, Oct. 16, at Anita. The Cougars won 67-18 to advance to the round of 32.

A group of Griswold defensive men tries to bring down CAM’s Colby Rich during the Cougars’ 67-18 victory Friday, Oct. 16, at Anita.

8 vs. 8 on this play – Griswold’s Cale Swain tries to dodge CAM defensive back Sam Foreman during first-round playoff action Friday, Oct. 16, at Anita. The Cougars won 67-18 to advance to the round of 32.

Lane Spieker made sure the Tigers knew that from the git-go. Once he and his Cougar teammates stepped on the gas, they never let up.

Spieker accounted for seven touchdowns on the evening – five by the run, two by the pass – and it added up to a dominating 67-18 win Friday night to send the Cougars into the second round of this year’s expanded playoffs.

It’ll be a rematch. Stanton-Essex will be the foe, a team that tested the Cougars before they eked out a 34-20 win a week ago.

“We didn’t let up. That’s a tribute to our kids right from the git-go. It’s playoff time and their mindset is a little bit different than what it has the regular season. We took care of business the regular season, and now we know we’re going to play some pretty good football teams from here on out.”

The Cougars were focused early, and the Tigers paid the price.

After being held to a three-and-out, the Cougars used their spread offense to the fullest, needing just three plays for Spieker to find Joe Kauffman for a 47-yard touchdown reception to make it 6-0 early.

Spieker credited his successes on the night – 255 yards worth, 142 of those on the ground – to his linemen and others in the backfield.

“Colby (Rich), Cade (Ticknor), Joe (Kauffman), Reese (Oglesbee), Nolan (Hensley), Gavyn Jensen ... they all did a great job blocking up front,” said Spieker, who scored on runs of 7, 44, 24, 5 and 6 yards in the first half. “We went over a lot of blocking schemes and they’ve really improved since Week 1. We’re going to really start bringing it to people when we start figuring things out.

“We’ve got one goal in mind and we’re going to keep chasing it.”

“It was all business from the start,” he said after both of his catches resulted in 55 yards and those two touchdowns. “We were determined on playing a dominant first quarter and first half to give our backup guys playing time in the second half.”

Jaxson Bell added a pick-six while Ethan Arp connected with Kauffman and Connor McKee on scoring passes of 7 and 37 yards, respectively, to go up 59-0 at halftime.

An Arp pass to Rich for 37 yards for the second half-opening score sent the starters to the sidelines and a date with Stanton-Essex was reserved.

Griswold showed flashes of promise during the first half but turnovers or a just plain tough CAM defense stopped anything they tried to get going. The Tigers did get on the board in the second half, with Cale Swain and Lane Mueller each going 13 yards for back-to-back scores, while Kamron Brownlee fired a 7-yard touchdown pass to Mueller to finish the scoring.

Griswold, which ended the year 0-6 and a losing streak dating to midway through the 2018 season, were playing for the first time since Sept. 25. The Tigers ended with 201 total yards, with Brownlee accounting for 41 of his team’s 50 passing yards. Cale Swain added 60 yards on the ground and Sam Olson 24.

Both Brownlee and Swain are sophomores, giving the Tigers a good foundation for the future.

For CAM, it’s time to focus on the next round, and Stanton-Essex. A victory puts them in the round of 16, the traditional playoffs and two games from the UNI-Dome in Cedar Falls.

Bower vowed that this game won’t be like the last time.

“I will guarantee I will remind our kids day as far as that mindset,” he said. “We’re going to be ready from the git-go.”