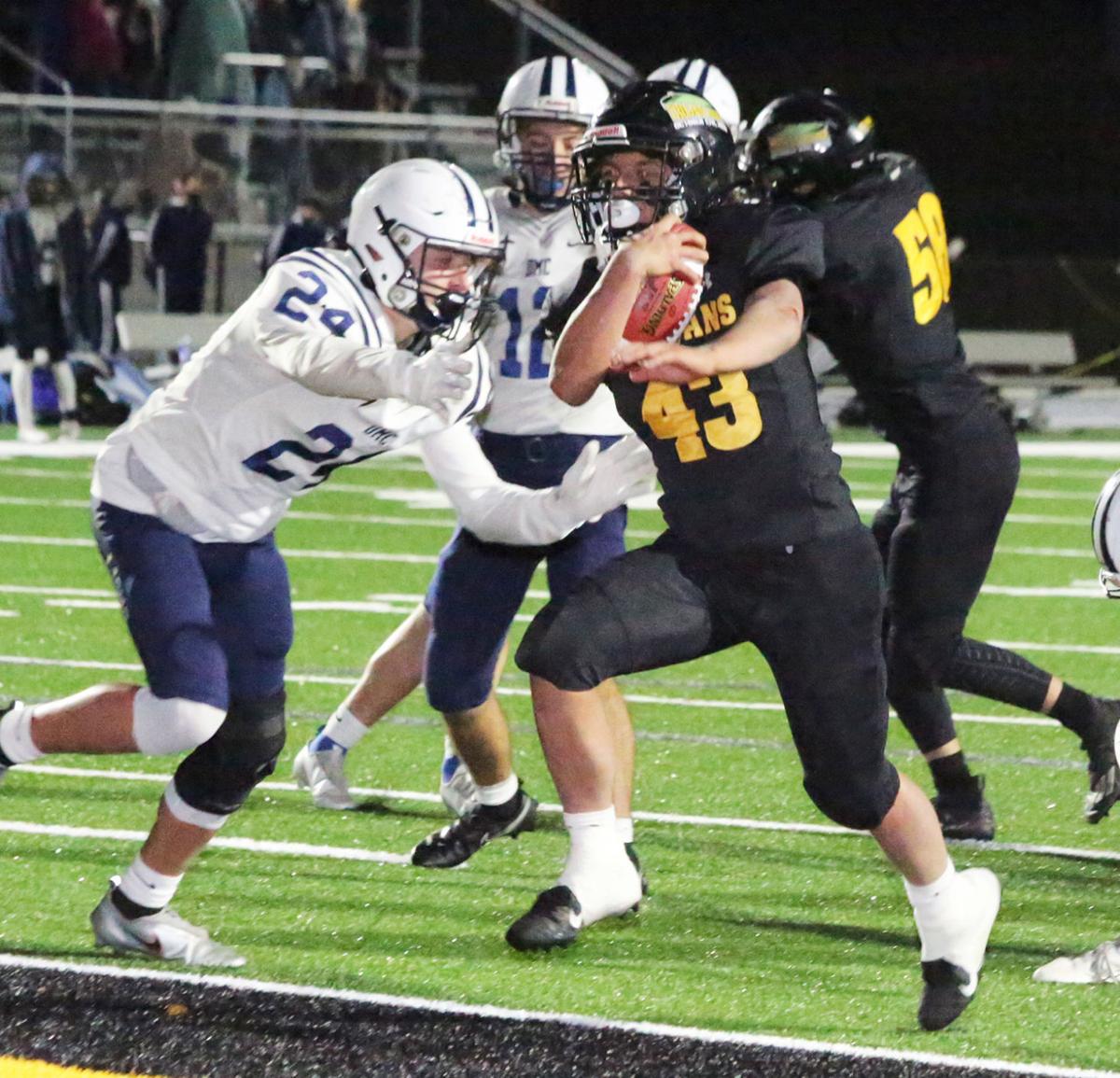 Bodie Johnson scores the first of two touchdowns on this play for Atlantic Friday, Oct. 23, against Des Moines Christian. 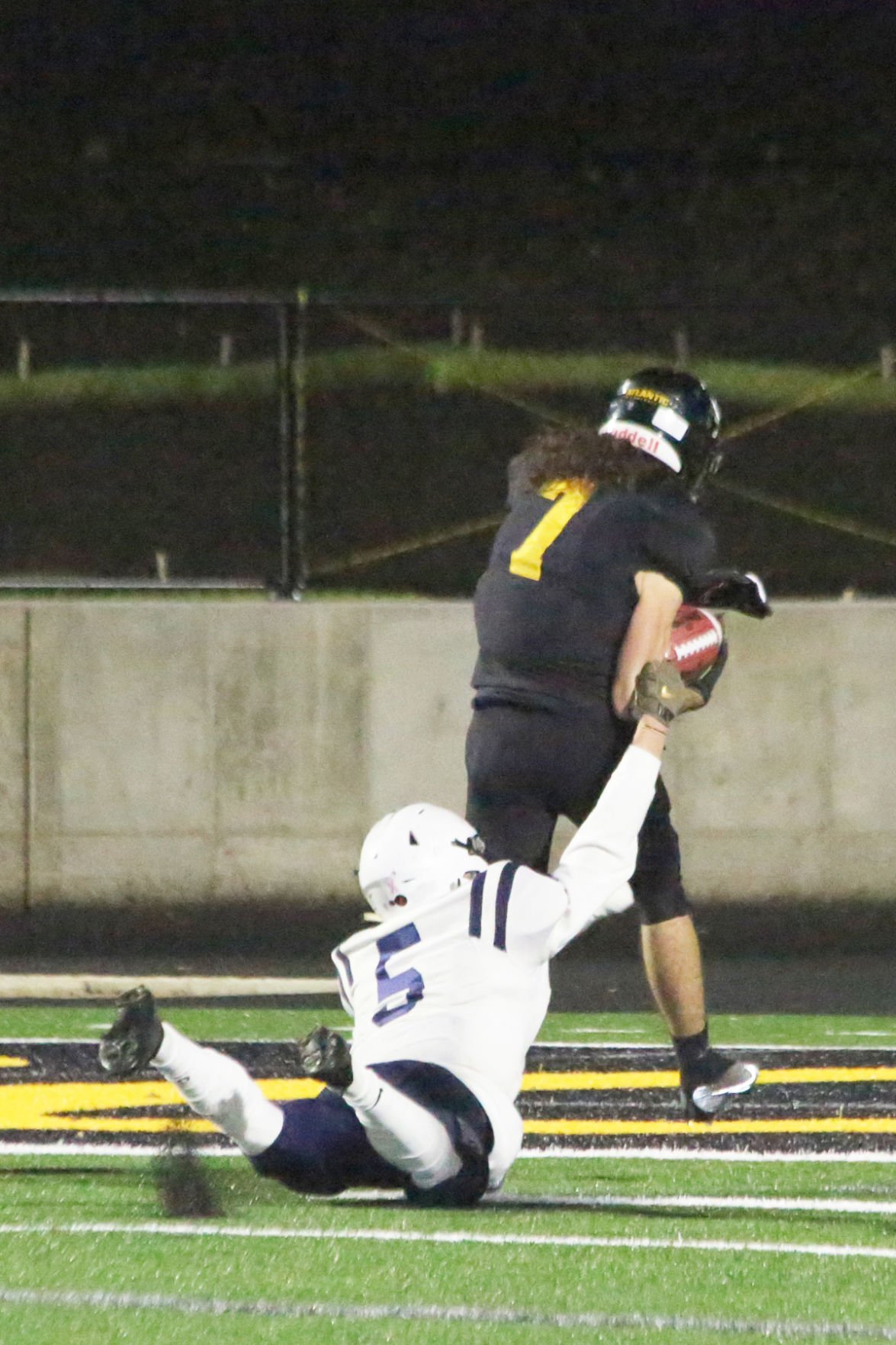 Colin Mullenix goes in for the 51-yard touchdown reception.

Bodie Johnson scores the first of two touchdowns on this play for Atlantic Friday, Oct. 23, against Des Moines Christian.

Colin Mullenix goes in for the 51-yard touchdown reception.

Two weeks after celebrating homecoming and the first game in the newly renovated stadium, one of Iowa’s most iconic, the Trojans reached another milestone Friday night: Their first “round of 16” playoff berth since 2002.

The Trojans thwarted a determined Des Moines Christian team in Friday’s Iowa Class 2A “round of 32” game by forcing six turnovers – five interceptions and a fumble recovery – and put the game on ice late with Bodie Johnson’s second touchdown of the night in a 21-0 victory.

The Trojans will find out today if they get at least one more game in the Trojan Bowl and try to extend the magic of the renovated stadium. Pairings for the “round of 16” are set to come out at noon today by the Iowa High School Athletic Association.

The win was the Trojans’ fifth-straight shutout victory and seventh in a row. Two of those were over DMC; the Trojans beat the Lions 38-0 on Sept. 25.

On a cold night with a gusty north wind at their backs, the Trojans took advantage of the conditions, but not right away. A missed 46-yard field goal that went just wide left and a lost fumble in the end zone stopped two Trojan scoring chances.

But then, late in the first quarter, Joe Weaver got his mitts on a fourth-down DMC pass. On the next play, as time ran out in the quarter, Garrett McLaren came out of the pocket to connect with Colin Mullenix on a sweet 51-yard play to go up 7-0.

“We knew that play was going to be there this week,” said McLaren. “It’s always there. But I’m more proud of Colin because that was his 1,000th receiving yard, so it was kind of a big deal for me to give him that.”

Mullenix said that it feels good to get to the receiving milestone, but the ultimate goal is there there.

“We’ve just got to get back to work on Monday,” he said. “Feels good to get a win out here in the Trojan Bowl.”

Johnson’s 5 yard run with 5:20 left in the second quarter made it 14-0 and the Trojans had the momentum, until the Lions tried to change the tempo with a no-huddle offense. The Lions made it as far as the 5 yard line when Mullenix intercepted Jaxon Withers’ pass intended for the end zone, preserving the Trojans’ 14-0 lead going into halftime.

Both teams tried putting together good drives but nothing materialized until about the 4-minute mark. That’s when Johnson barrelled for a 32-yard pickup to the 8-yard line. Two plays later, he busted through the heart of the Lions’ line with the game-sealing touchdown.

The Lions tried to avert the shutout, but Zane Vance came up with the sixth and final interception and the Trojans took the knee ... and then the banner that signified them as an Iowa Class 2A playoff team for 2020. Johnson, Easton O’Brien and Joe Weaver had the other picks.

It’s been a lot of hard work to get to 7-1, the school’s best in almost 20 years. They’ll get another chance to extend that and put themselves in line for the ultimate prize: A trip to Cedar Falls and the UNI-Dome.

“A lot of chemistry with our team,” said McLaren as the key to the team’s success. “We love each other and we’re very close and we all are on the same page and that helps us get the ball down the field. It helps our defense and ... we’ve been doing a pretty good job.”

“We’ve all been playing together for a long time and that helps when we come out here and play,” added Mullenix.

Garrett McLaren and Colin Mullenix on Atlantic win over DMC