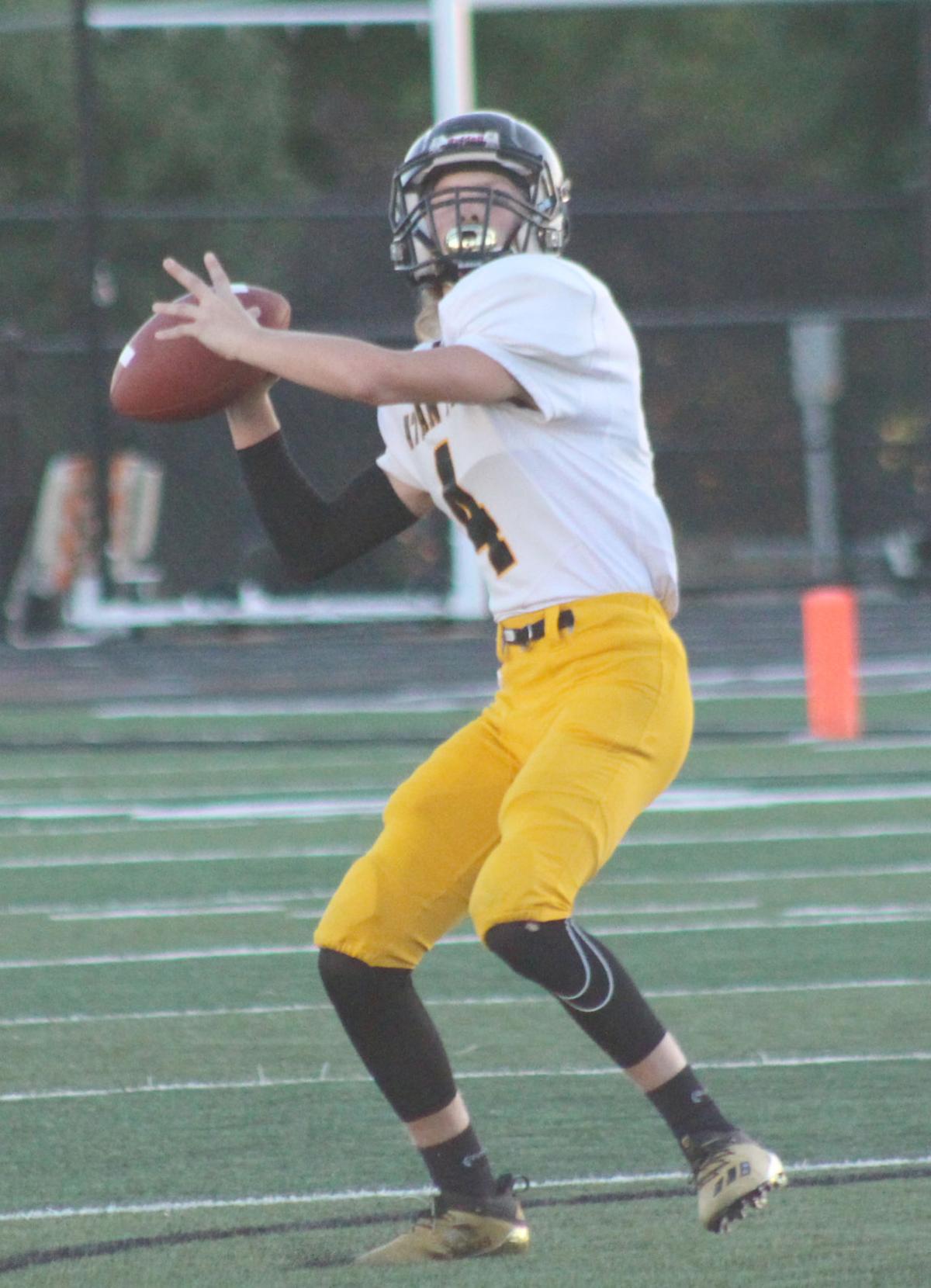 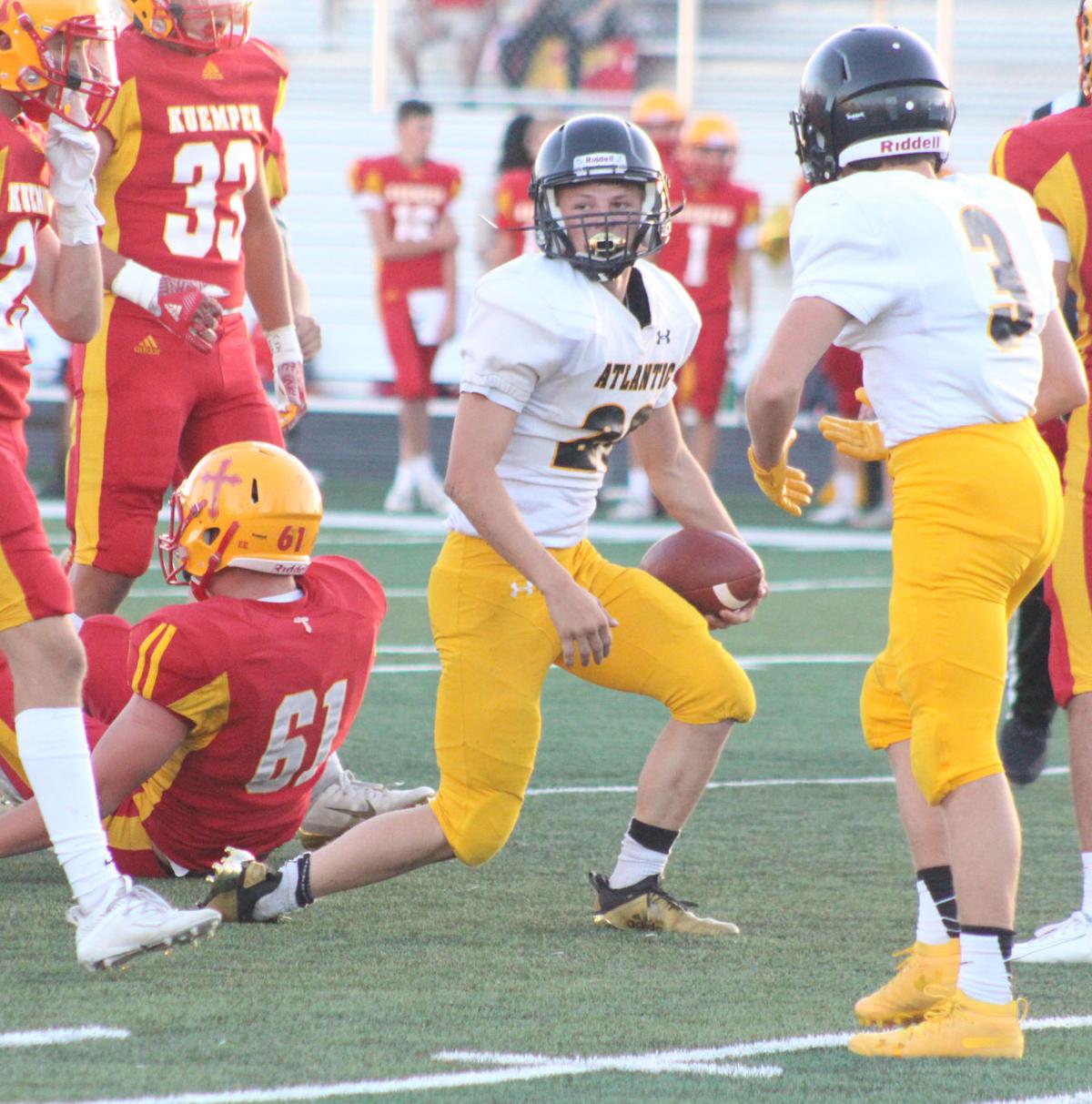 Korey Parrott celebrates the gain for Atlantic against Carroll Kuemper.

Korey Parrott celebrates the gain for Atlantic against Carroll Kuemper.

ATLANTIC – If there was anything that impressed Atlantic coach Mike McDermott about his team’s win over Carroll Kuemper last week, it was “improvement.”

“Just the improvement we made from Week 1 to Week 2,” he said of the Trojans’ 21-10 win over the Knights. “It’s so critical in the game of football that you make big strides and I thought we did offensively and on special teams, and even defensively improved in that second half. I thought we played, for the most part, a complete game.”

Eating up clock. Taking care of the ball. Moving the chains. Putting your team in good field position. Putting points on the board.

Those things will be critical this week as the Trojans face Greene County this week.

The Rams are 1-1 but received a vote in the Associated Press’ latest Iowa Class 2A poll. They’re coming off a dominating 49-0 win over Perry, a game where the Rams rolled to a 43-0 halftime lead and cruised on continuous clock to the win.

The studs from last year’s Class 2A District 9 runner-up and playoff qualifier – quarterback Brent Riley, wide receiver Carter Morton, running back Colby Kafer and defensive tackle Tyler Miller – are gone, but there’s a new cast of players that were dominant in the win over Perry.

Bryce Staldter has been 20-of-44 passing for 302 yards and three touchdowns, including two in the win over the Bluejays. Seven different Rams carried the ball against Perry, while eight caught at least one pass; leaders were Nathan Black (41 rushing yards) and Jaxson Warnke (53 receiving yards).

“Their quarterback is just a great athlete,” said McDermott, remarking about his field vision and ability to set up screen and vertical passes. “He’s the fastest kid on the team. He can throw it a little bit but what scares us is his ability to throw the football. He’s got good vision when he runs the football.”

The Rams’ defense, meanwhile, held the Bluejays to 43 total yards.

“They certainly looked good on film,” said McDermott. “Their offense and our defense should be a good matchup.”

The wide variety of players who got offensive statistics sort of mirrored what Atlantic did against Kuemper. With two quarterbacks under center, five Trojans rushed the ball and five had receiving statistics.

“It was nice to get some guys back and our offensive line was all together really for the first time,” he said. “We moved guys in and out and they had a good full week of practice and it showed in the game as well.

“Focusing on ourselves, we need to do the same thing offensively (as in the Kuemepr game), and that’s continue to move the chains and put the defense in a good position to win some field position for us,” he continued. “We need to continue to spread the ball around. For us, that team approach is going to be critical moving forward.”

This week, focus continues to be on special teams. Not only will they be counted on to put their defense in good field position, but the Trojans are looking to improve the kick and punt return games.

“We did block a punt last week, with Cael Pulido, which is a huge play in football,” he said. “Statistics say you’ve got a 90-percent chance of winning if you block a punt.”

The Trojans figure to stick with the two-quarterback system, and both Garrett McLaren and Caden Andersen are proving their worth. McLaren had a 20-yard touchdown pass to Colin Mullenix, while Anderson added 62 total yards that were vital in the win.

“We like what they do out of each particular set. Garrett’s more under center and Caden’s been more in the shotgun,” said McDermott. “We like those sets and we’re going to continue that.”

McDermott said the Rams showed two different defenses on film, and noted they like to blitz.

“How well do we handle the blitz and the field conditions? It looks like it could a wet night again. It’s going to come down to how well do we sustain drives.

“Defensively, we need more turnovers,” he continued. “We didn’t get any turnovers last week besides the blocked punt, so we need to get some interceptions and balls on the ground.”

Some clouds this morning will give way to generally sunny skies for the afternoon. High 71F. Winds E at 5 to 10 mph.