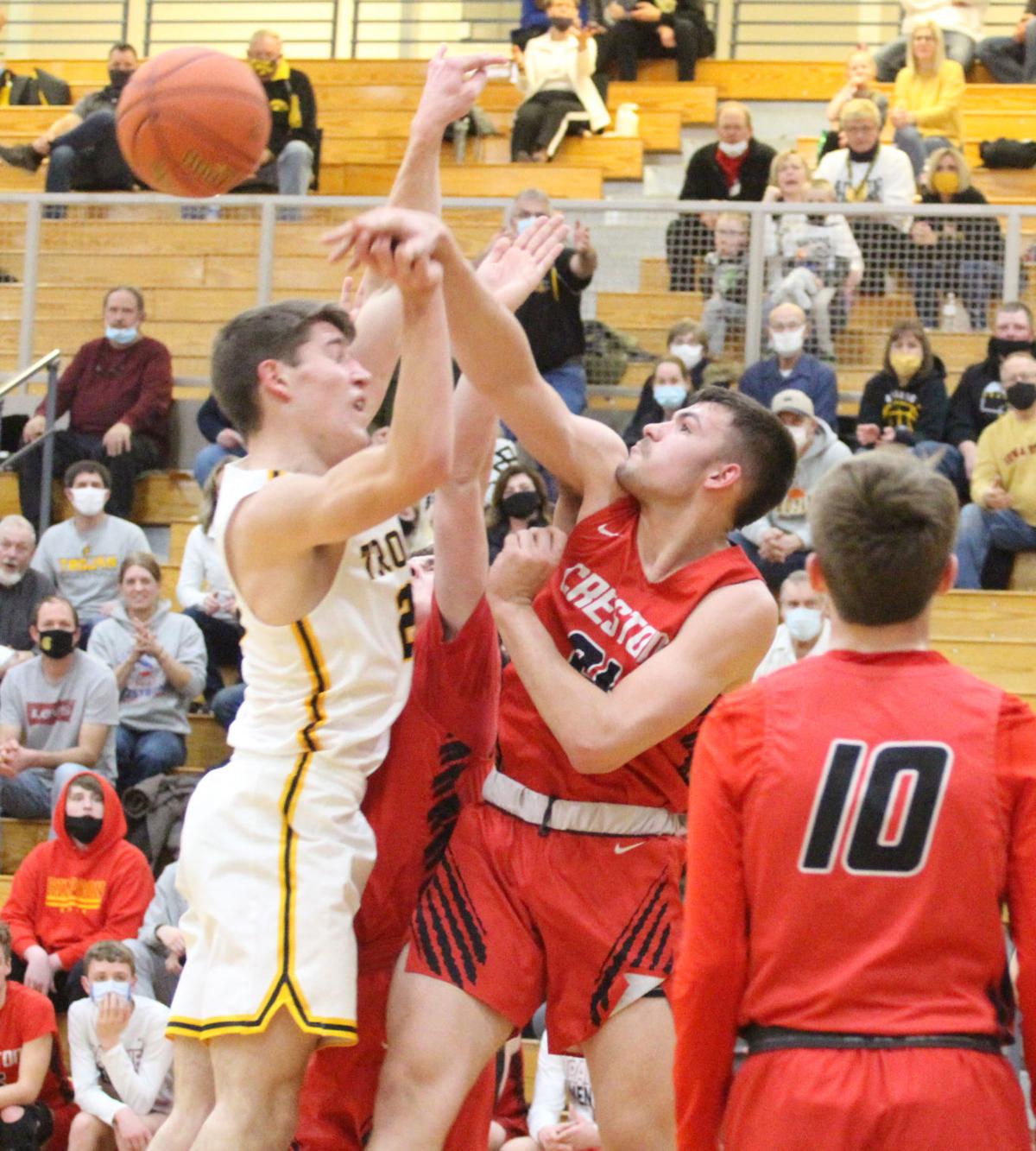 Garrett Reynolds looks to the basket for Atlantic. 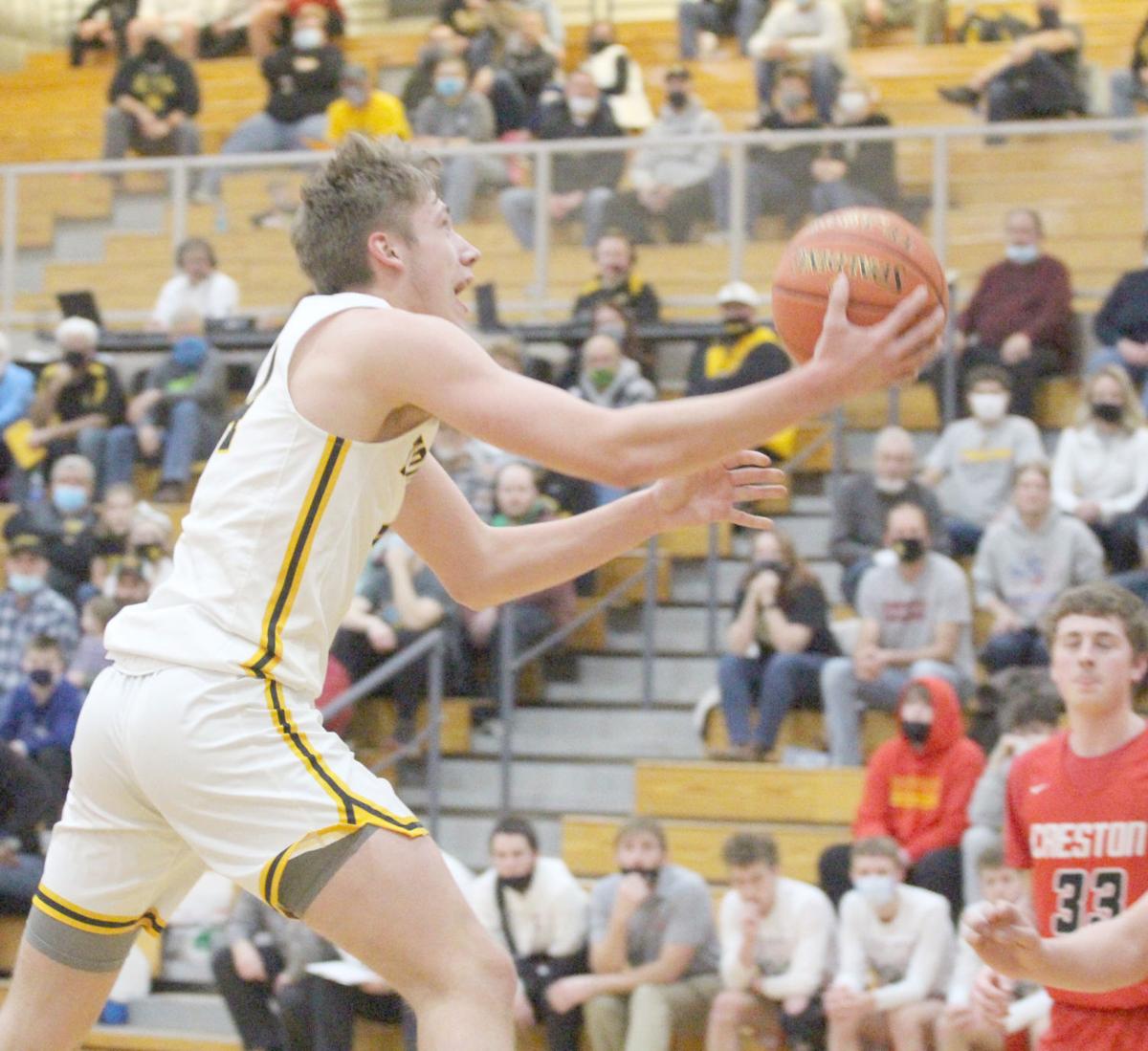 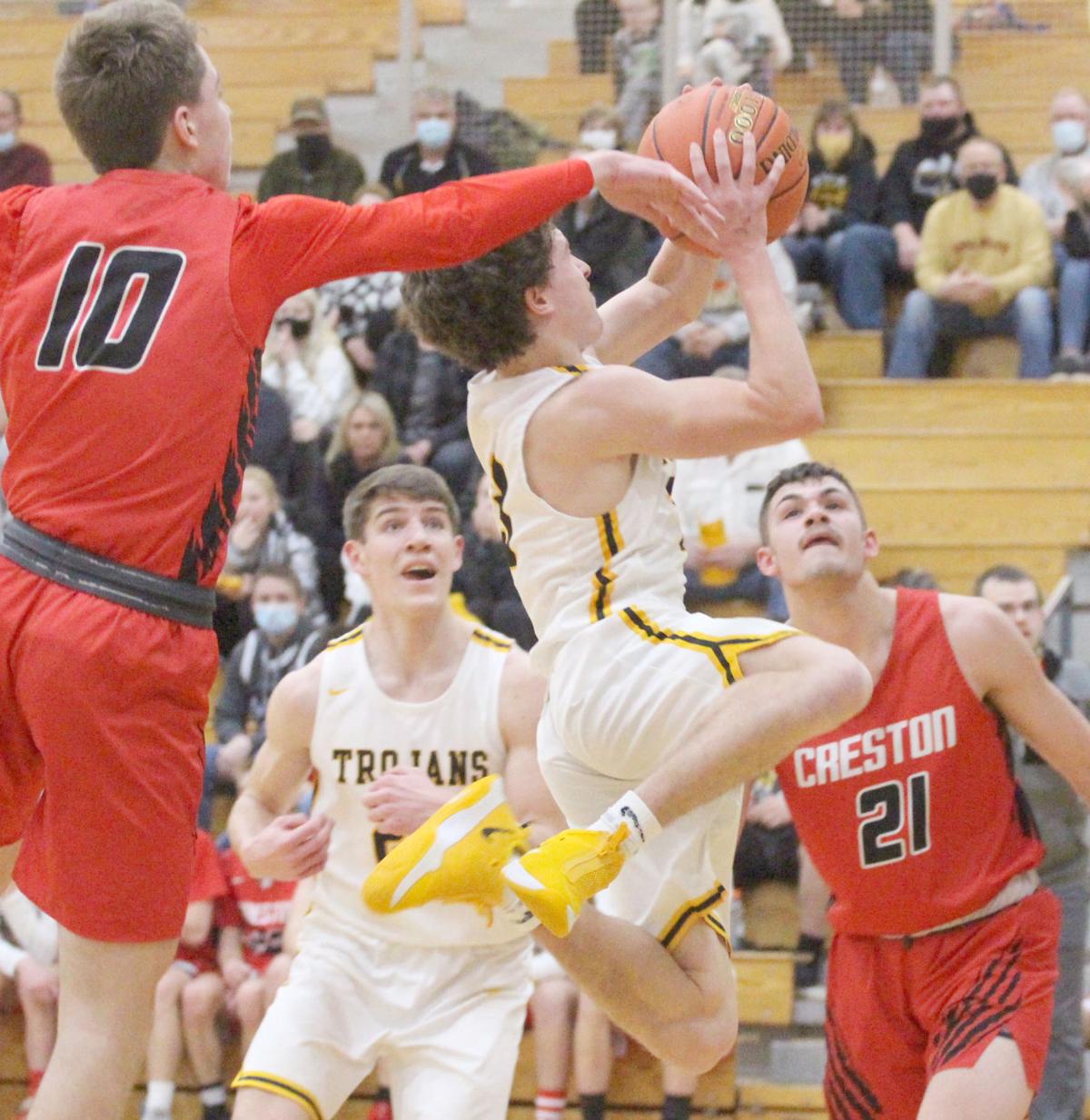 Grant Sturm goes airborne as he tries to get the shot off before it’s blocked by Creston’s Colby Berg.

Garrett Reynolds looks to the basket for Atlantic.

Grant Sturm goes airborne as he tries to get the shot off before it’s blocked by Creston’s Colby Berg.

ATLANTIC – Grant Sturm was just a little bit nervous when he went to the line to shoot free throws.

With the game on the line, he had to tell himself to calm down before going to the stripe and focus.

“I actually told myself it’s just like practice,” the pint-sized senior guard for the Trojans’ said. “We shoot free throws every day, and got to make 40 after practice.

Well, 5-for-6 in free throw shooting – all in 1-and-1 situations – in the final 46 seconds, nursing just a slim one-point lead when the first attempt was made, helped finally build enough cushion for the Trojans to break away from a stubborn and better-than-their-record Creston squad and advance in the Iowa Class 3A substate, 53-47, Monday night.

“We were ahead by one when I made the first one,” said Sturm. “ I just knew I had to make them and that would give us a good lead and help us pull it out.”

The win on the Trojans’ home floor was the program’s first post-season advancement in three years, and puts them in Thursday’s semifinals against Glenwood, a winner over Clarke of Osceola in another first-round game. The game between the 2 and 3 seeds is at Glenwood.

The Trojans needed to rally past the upset-minded Panthers to allow Sturm to give them a chance to win.

The Panthers connected on five three-point shots, including their first three field goals of the contest, to build at one point a 22-13 lead midway through the second quarter.

“First of all, you’ve got to give Creston a ton of credit, hitting those threes there in the first quarter and got them out rolling,” said coach Jeff Ebling. “Next thing I know we’re down four or three. Our guys are pretty resilient and I thought we do a good job attacking.”

But the Trojans were being beaten on the boards, held mostly to one-and-done possessions after not-necessarily bad shot taking. The Panthers, meanwhile, seemed to be able to connect.

“We just grouped together. Coach (Ebling) called a time out and got us together and we got it locked in,” senior Skyler Handlos, who had a game-high 19 points. “We can’t waste our season on it. We’ve worked hard for it. Locking in and communicating more on defense. Communication is key and we got it done.”

Fourteen of Handlos’ points came in the first half, and while nobody else had double figures for the Trojans, there were several important contributions, especially in the second half.

The Sturm brothers, junior Ethan and senior Grant, combined for 17, with Ethan hitting on a pair of treys at a point when the lead switched between the Trojans and Panthers. Craig Alan Becker and Garrett Reynolds each came off the bench to score five and six, respectively. Ethan Williams added four, including two off a feed from Handlos that gave the Trojans their first lead early in the second half, while Dayton Templeton had two.

That was important because the Trojans could never extend their lead past one possession until Grant Sturm’s clutch free-throw shooting in the final minute.

“I got really got it going, but I didn’t really need to score. My teammates did it for me,” said Handlos. “It was an all-around team win and I’m glad we didn’t have overtime for the first year in three years.”

“Other guys stepped up and that’s the sign of a good team,” noted Ebling. “We’ll learn from our mistakes here and have to days before we play Glenwood.”

Now, Atlantic is 13-6 and continue their post-season for the first time in Ebling’s three seasons. Glenwood holds two previous wins over the Trojans, but the second game was tight until the final couple of minutes.

In the meantime, does it feel good to advance?