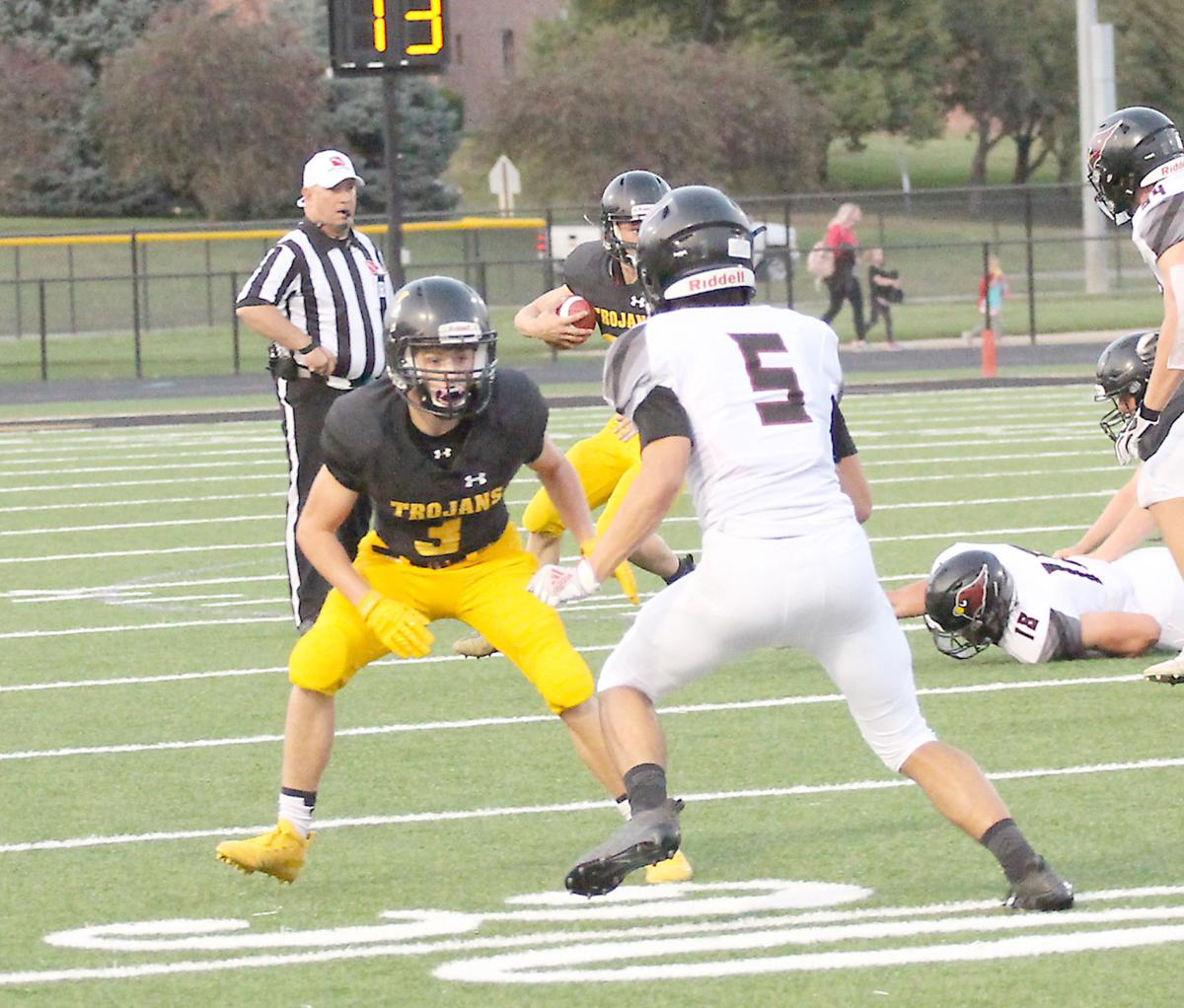 Grant Sturm was a force on both sides of the ball Friday night against Clarinda, but none more so on defense with four interceptions in a 7-0 win over Clarinda. 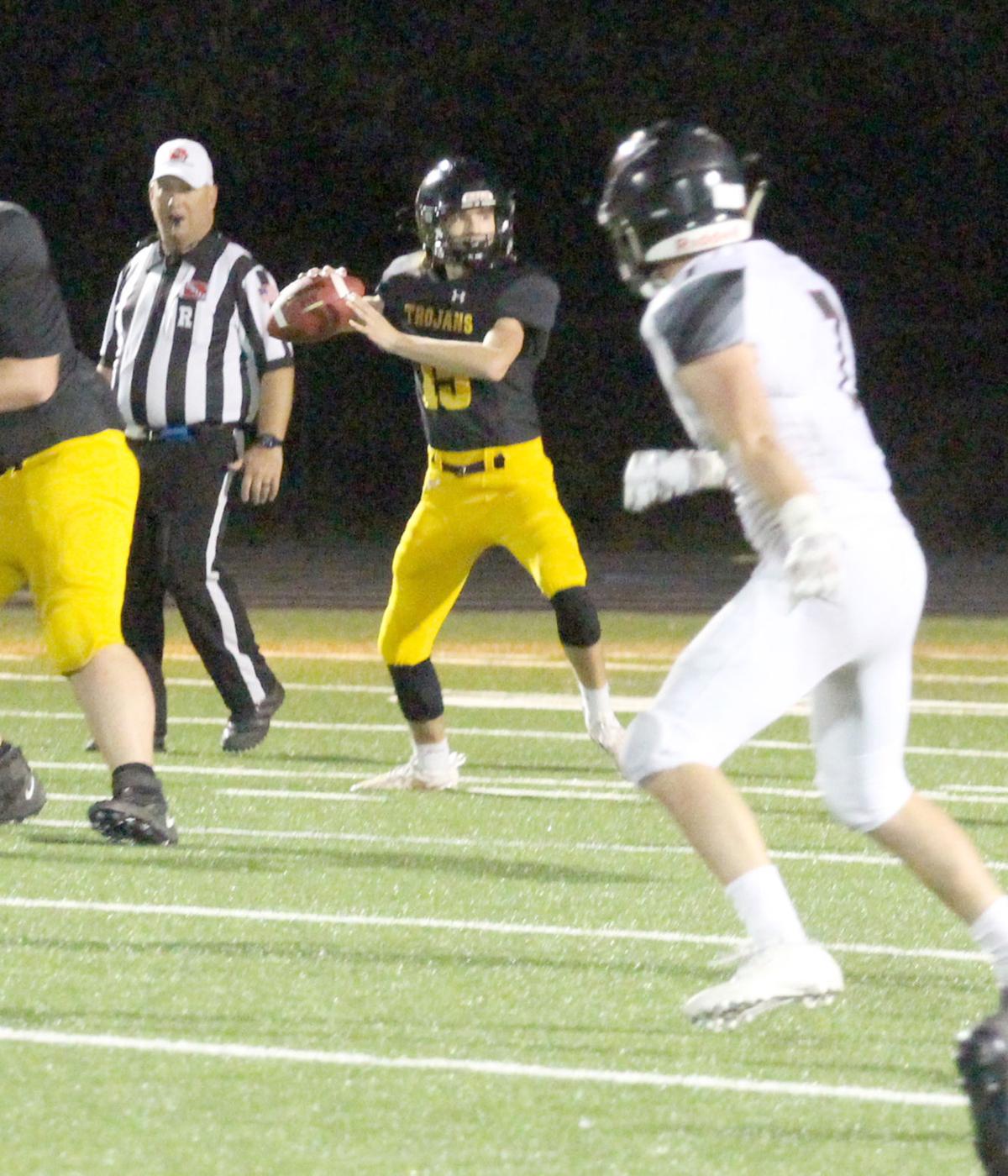 Atlantic quarterback Caden Anderson had 167 yards passing and a touchdown in the win over Clarinda.

Grant Sturm was a force on both sides of the ball Friday night against Clarinda, but none more so on defense with four interceptions in a 7-0 win over Clarinda.

Atlantic quarterback Caden Anderson had 167 yards passing and a touchdown in the win over Clarinda.

GLENWOOD – Usually, it’s the big guys who pick on the little folks.

In a wild Iowa Class 2A District 9 battle Friday night, it was one of the smallest guys on Atlantic’s roster who came up the biggest.

Grant Sturm isn’t big physically – probably 5’6” and 140 pounds – but he came up the biggest in the Trojans’ defensive battle with Clarinda.

The Trojan senior had four interceptions, including two key takeaways in the fourth quarter. In a tight game such as this one, it can make all the difference, and that it sure did in the Trojans’ 7-0 victory at Clarinda.

On a night they had hoped to break in the new Trojan Bowl – wet weather last week delayed completion, forcing Atlantic to play at Glenwood’s year-old athletic complex – the Trojans used six total turnovers and some other big-time defensive stops to knock out the Cardinals in what could have been one of the key battles for the District 9 title.

Sturm never took his eyes off Cardinal quarterback Wyatt Schmitt. He did have a couple of huge pass completions to help his team threaten, but of the six interceptions the Trojans collected, four were by Sturm.

“I’m smaller, so they’re going to try to throw it to me,” said Sturm. “They did complete a couple in the first half but in the second half, but they kept throwing it my way and I kept coming down with the ball.”

Probably the biggest of Sturm’s four interceptions came less than three minutes left. Trying to ride the momentum of a missed 30-yard Trojan field goal that attempt bounced off the left goalpost, Schmitt tried to move the ball downfield. After picking up seven yards on second down to get to the 20, Schmitt threw a long pass but Sturm stepped in front Cardinal receiver Taydn Brown near the 48 yard line and stopped the threat.

He also picked off Schmitt as time expired on a desperation throw.

“I was just in better position,” said Sturm. “I was behind him on the first couple and got the ball.”

Small kid, a ton of heart.

“He’s got great football skills,” said coach Mike McDermott. “He hasn’t been blessed with a lot of size. They tried to pick on him and he made them pay.”

The Trojans’ defensive effort, which stopped the Cardinals twice inside the Atlantic 10-yard line, helped overcome nine penalties and four turnovers of their own. Several of those penalties negated good punt returns or large gains.

“We weren’t doing much offensively and that brings a lot of frustration, but our guys have got to hang in there and doing a better job of controlling their emotions,” said McDermott. “I thought for the most part offensively that was the critical thing. Just because we’re not moving the ball, we’ve got a great defense, and holy cow, they showed that tonight.”

The Trojans had multiple chances and got the game’s lone score off Caden Anderson’s 14-yard pass to Korey Parrott with 7:36 remaining in the game.

“That was a play we tried to run in the first half and would have done the same thing (scored) had we completed it,” said McDermott. “Caden learned from his mistakes and made a couple of nice plays.”

This game was a defensive slobbernocker. The Trojans collected 266 yards, including 167 from Anderson on 10-of-16 passing with two interceptions, but the defense held the Cardinals to 198 total yards, and in addition to the six interceptions had a fumble recovery.

“The second half, we made some nice adjustments on defense. Coach (Lee) Saathoff got in the locker room, drew some things up and our defense comes out and puts the clamps on them.”

Ethan Sturm and Joe Weaver had the other interceptions for the Trojans.

The Trojans improved to 3-1 overall and will return to the road Friday, Sept. 25, to take on Des Moines Christian.

McDermott thanked the Glenwood staff for letting them used their facility.

“We’re looking forward to playing at home,” he said, “but a big thank you to Glenwood and their (activities director) Jeff Bisson and their head coach Cory Foust and the whole Glenwood community.”