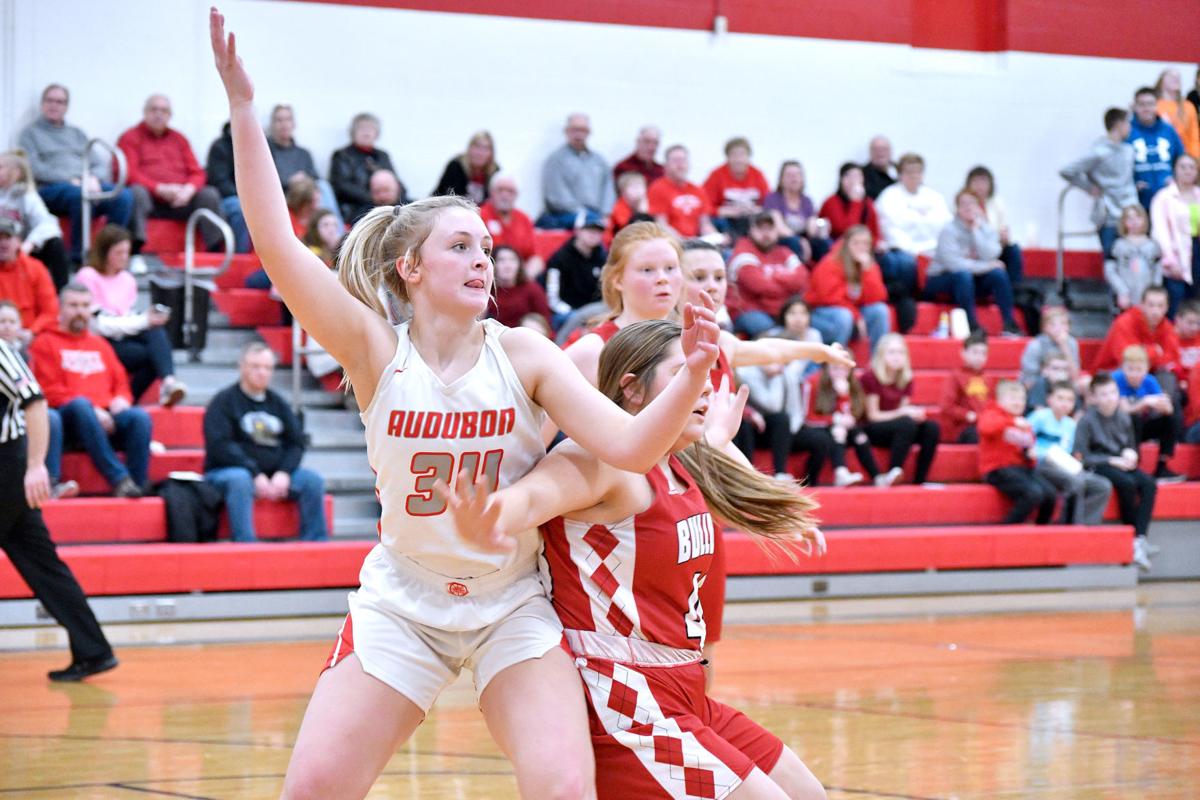 Audubon’s Jaci Christensen had a dominating night Thursday against the O-M Bulldogs scoring 27 points and grabbing 10 rebounds. The Wheelers won the game and will face Stanton on Tuesday. 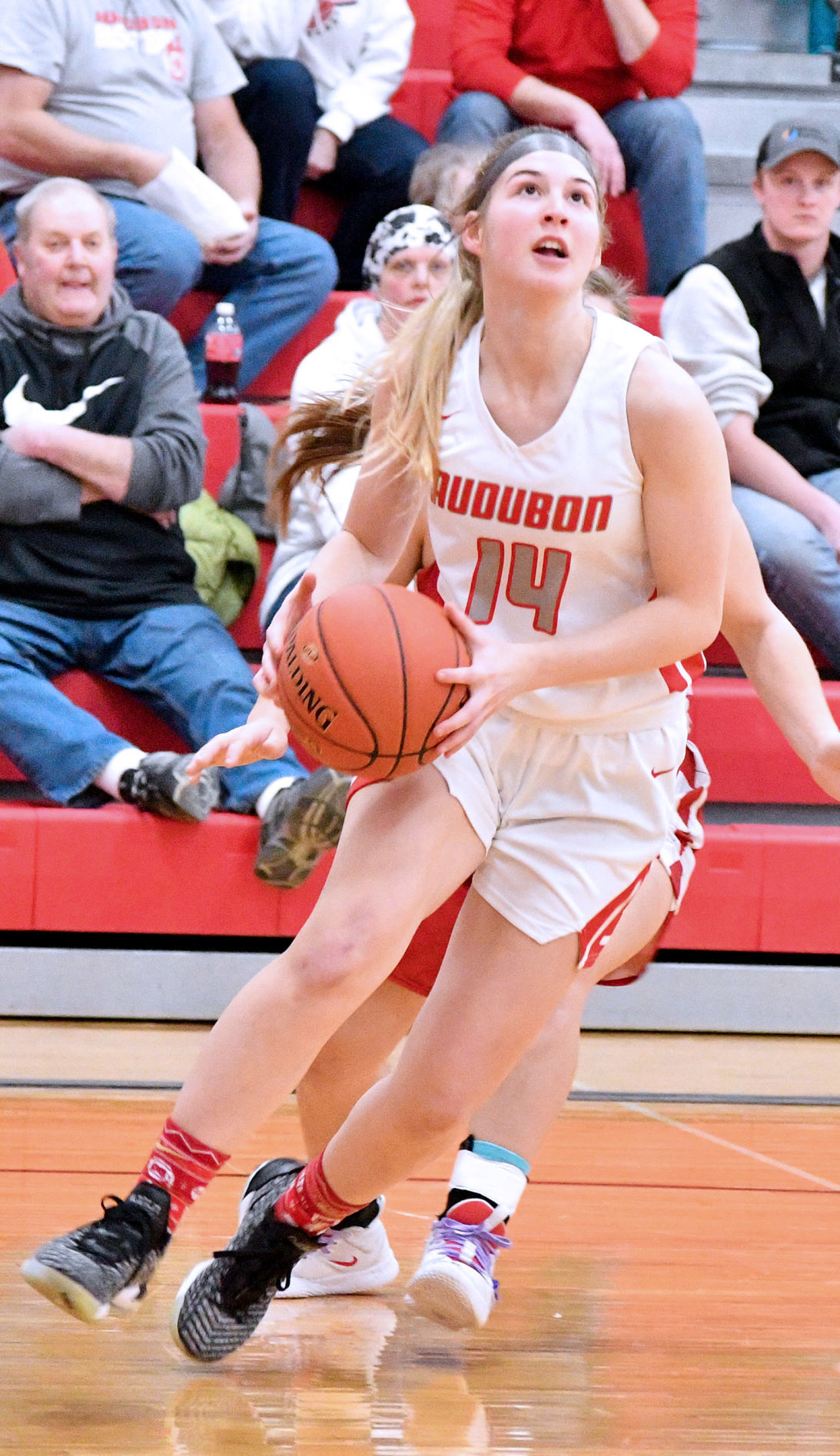 Aleah Hermensen drives to the basket on the way to scoring 16 points for the night. 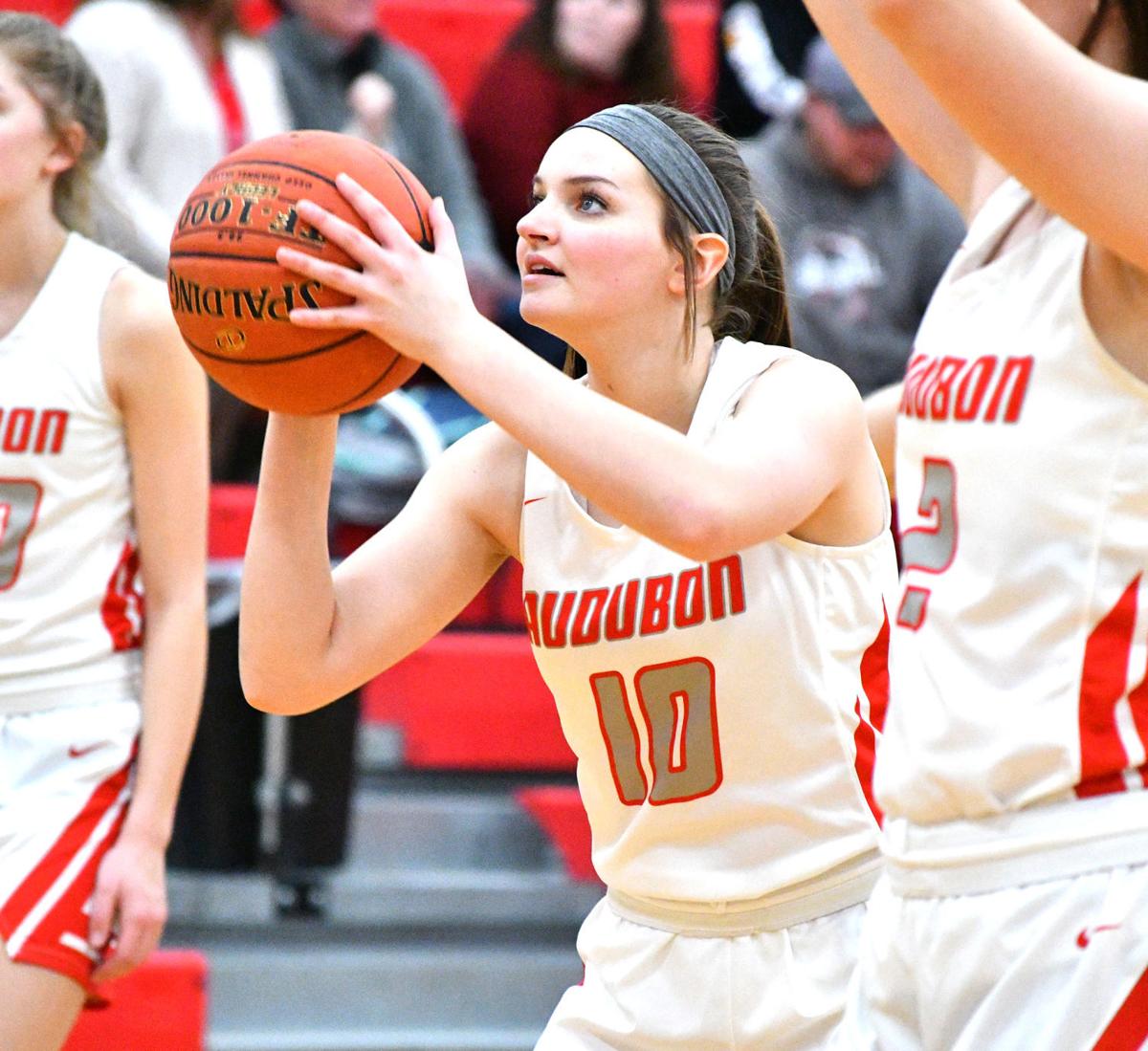 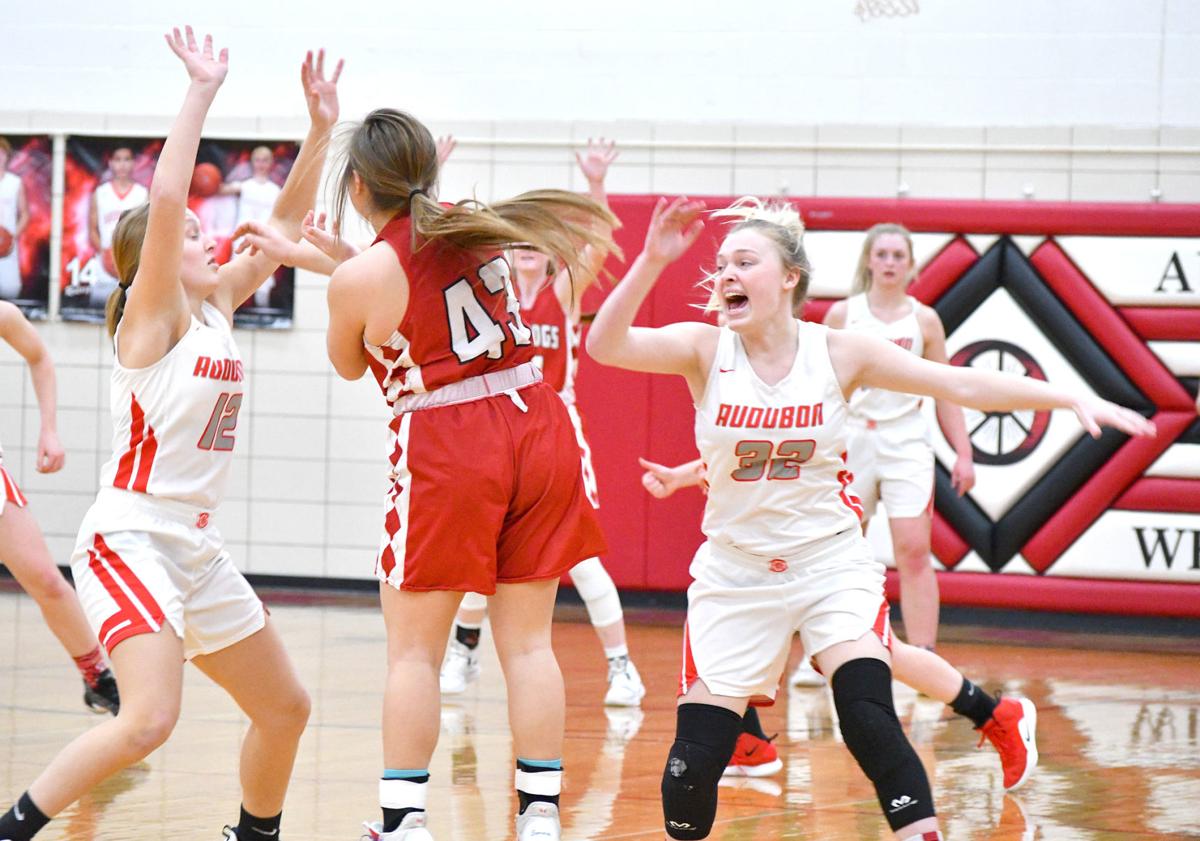 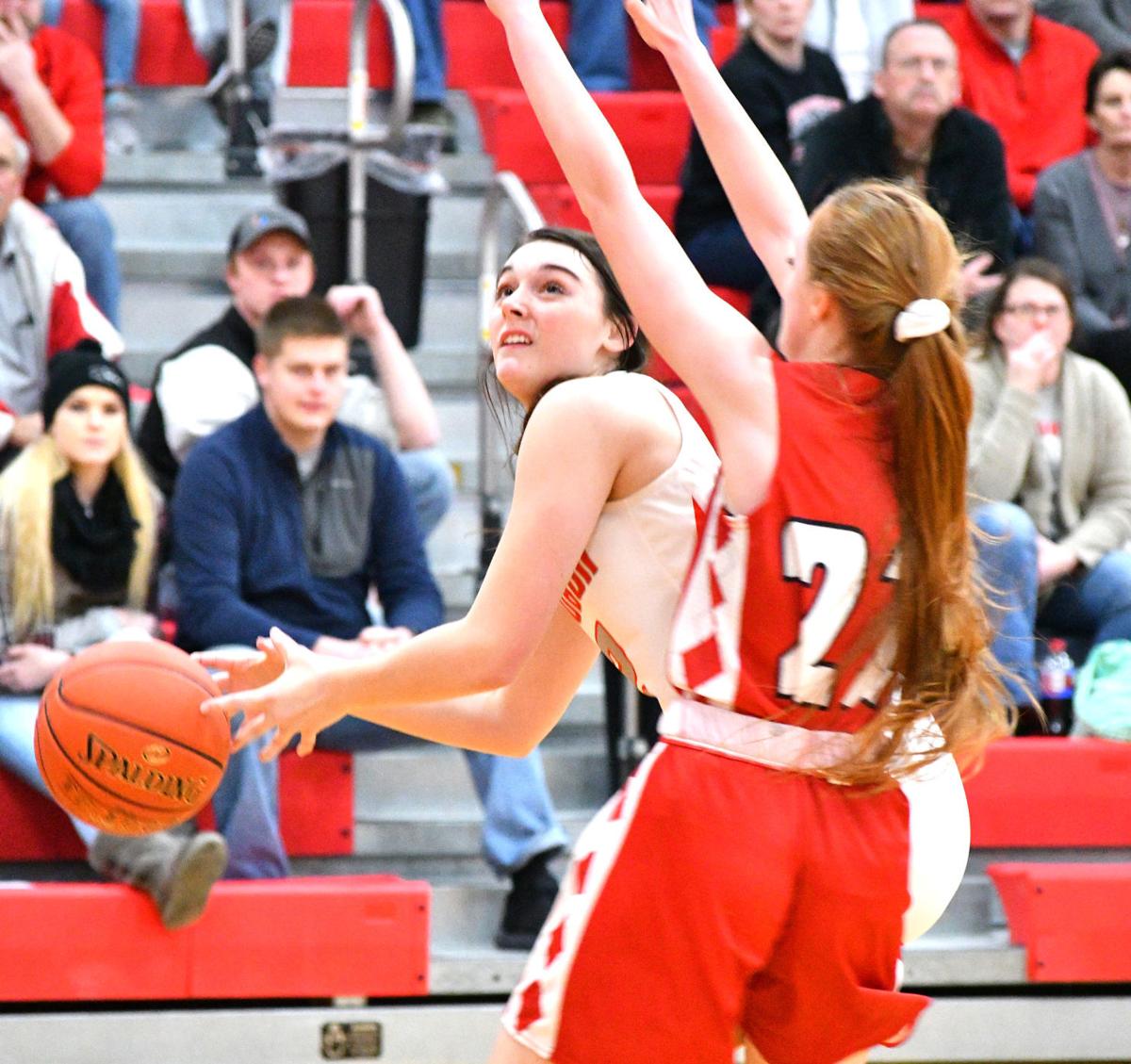 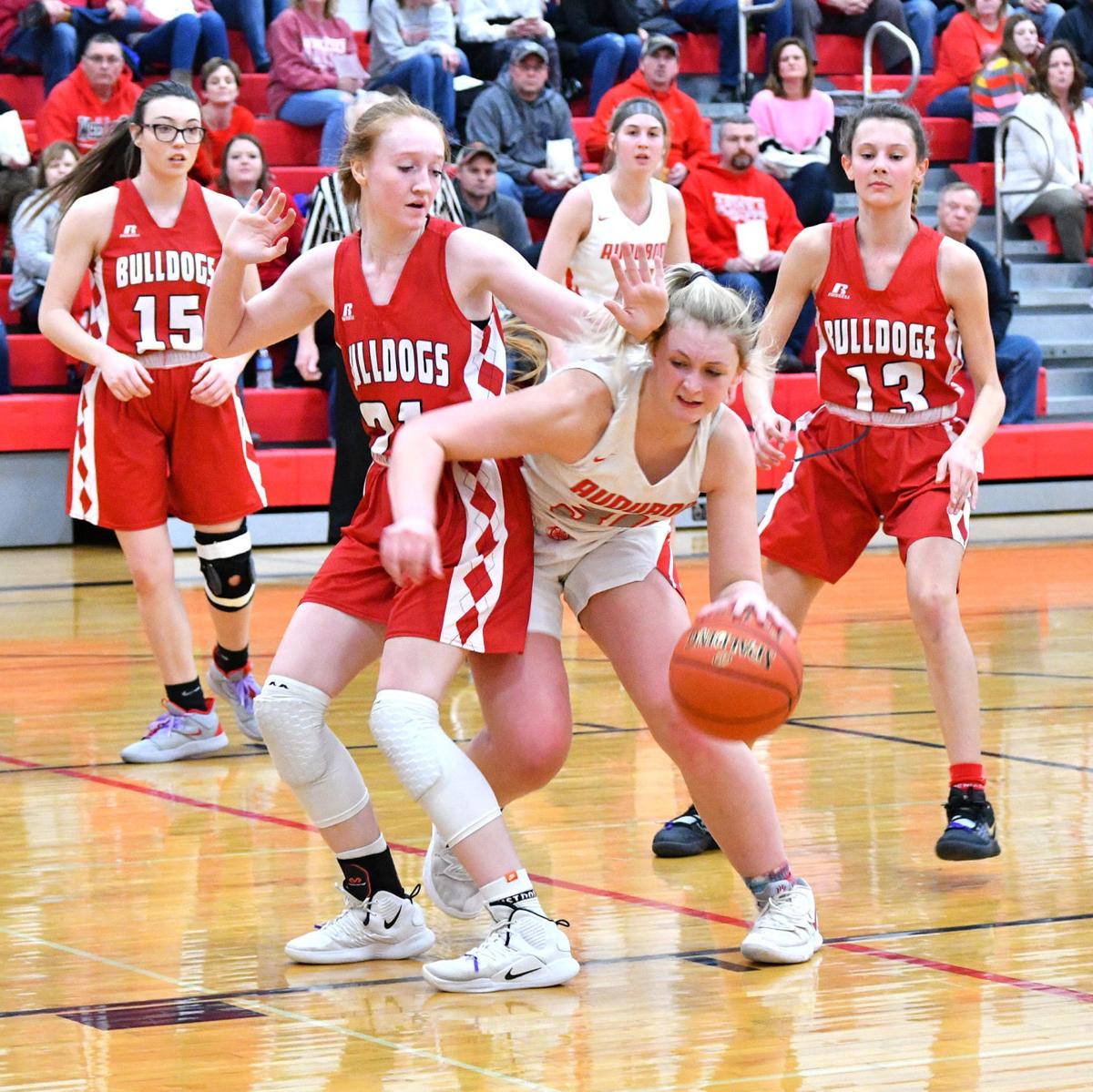 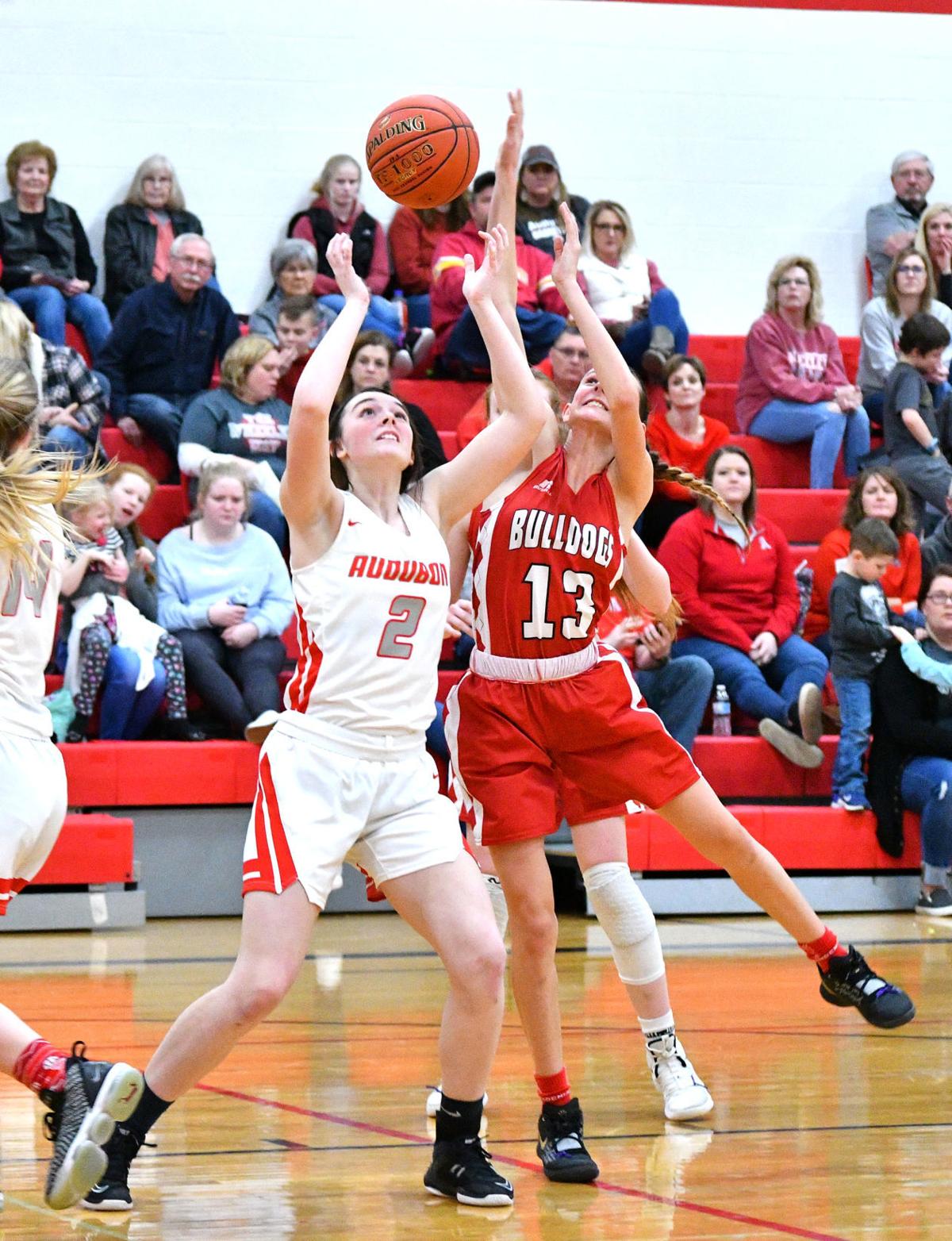 Audubon’s Jaci Christensen had a dominating night Thursday against the O-M Bulldogs scoring 27 points and grabbing 10 rebounds. The Wheelers won the game and will face Stanton on Tuesday.

Aleah Hermensen drives to the basket on the way to scoring 16 points for the night.

AUDUBON — The Audubon Wheelers wasted no time Thursday night making a statement in the first round of regional basketball action — if there are doubters out there take note, the Wheelers are for real.

Facing off against the 10-11 Orient-Macksburg Bulldogs on their home court, the 15-7 Wheelers were clear favorites and even with a slow first quarter start, overwhelmed the Bulldogs on their way to a 77-37 win.

Jaci Christensen proved to be a force to be reckoned with dominating down low on both sides of the court leading the team with 27 points, 10 rebounds, four steals and a block- and she went a perfect 5-5 from the freethrow line.

The Bulldogs were unable to matchup with Christensen and couldn’t find an answer for the aggressive play of the talented sophomore.

Head coach Darran Miller summed it up after the game, “We were able to find where the weakness was, and get the ball to her and let her score.”

“I felt really confident knowing that they didn’t have anybody that was super tall so I just went for it — shot confidently, used my left hand and my right hand,” Christensen said describing her night.

But as impressive as the win was, it was a rocky start for the Wheelers who couldn’t seem to find the range early in the first quarter — and when the Wheelers were caught with the wrong startling lineup on the floor — the subsequent technical foul gave the Bulldogs an ealy 4-0 lead. But midway through the quarter the Wheeler defense began pressuring the ball and that provided the spark the team needed.

“It’s tournament time so records don’t mean anything and I wanted to make sure we came out good and came out strong — our pressure was good enough to pressure them at the end of the first quarter — we got some easy layups and that definitely helps the confidence when the ball goes through the hoop,” Miller said.

With the added pressure the Wheelers would go an 11-5 run to end the quarter and never look back. By the end of the second quarter, in which the Audubon would outscore the Bulldogs 31-9, the game was well in hand.

The Wheelers would cruise to the finish in what turned out to be a dominating effort. But as impressive as Christensen’s effort was, two other Wheelers would score in double figures and the ever-present Aleah Hermensen would knock down 16 points and generally made herself a nuisance of herself for the Bulldogs. Hermensen’s hustle on both sides of the court racked up eight rebounds, three steals and two assists. She leads the team in scoring — averaging over 14 points a game, but also in assists and steals with 62 each, far and away ahead of anyone else on the team.

“Teams are going to guard her hard and that’s fine because we have other people that can score,” Miller said. “They put so much pressure on her and she does a good job of finding the open person.”

Senior Rylie Hartl also had an outstanding night hitting three of seven three point shots and scoring 13 for the night.

The road to the state tournament will get tougher from here on in for Wheelers who will face a stout Stanton team on Tuesday in the second round. The Viqueens will come into the game with a 20-2 record after handing Diagonal a 73-30 loss Thursday night. To make matters worse the game will be played on Stanton’s home court. Should the Wheelers win it could set up a rematch with the 19-1 Elk Horn-Exira-Kimballton Spartans who had a bye in the first round and have a last second win over the Wheelers under their belt.

But that is in the future and Miller said the team is clearly focused on the immediate task at hand.

“It’s one game at a time — it’s the old cliche — we talk about that,” he said. “Stanton is a good team — it’s on the road and they’ve got a pretty good record.”

That game will tip off at 7 p.m. Tuesday night in Stanton.