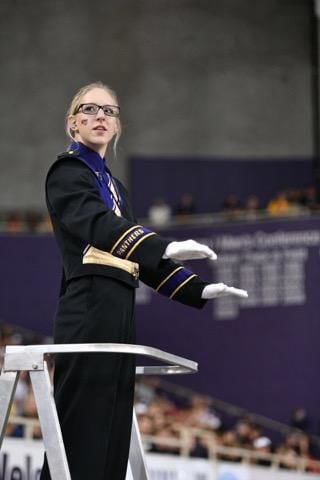 LaFoy directs the band during one the Panther’s halftime performances at a UNI Football game. 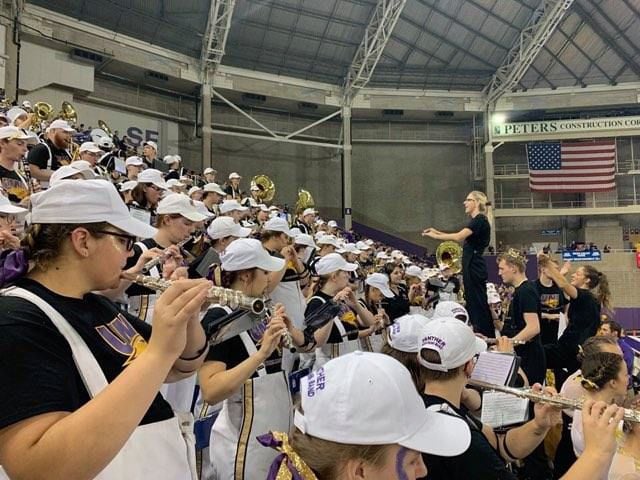 One of LaFoy’s main jobs is to main the band’s tempo, the senior here practices the tempo with the band including her old instrument group, the flute.

LaFoy directs the band during one the Panther’s halftime performances at a UNI Football game.

One of LaFoy’s main jobs is to main the band’s tempo, the senior here practices the tempo with the band including her old instrument group, the flute.

CEDAR FALLS - While football games are entertaining to the Northern Iowa Panther fans, the sound of the marching band is another element that puts a jolt in the UNI fans on game day.

If you take a look at one of the leaders of that UNI band of over 270 members, you’ll see Audubon alumni and UNI senior Drum Major Timarie LaFoy. From day one as one of the flute players, to a sectional leader her sophomore year, to drum major this fall her rank has grown bigger as time has gone along as well as her passion for music.

“It began when I got really involved with band and choir back at high school,” LaFoy said. “Those classes were always my favorite. It was a creative outlet to be rid of other things that were going on. My choir teacher Donna Washburn, my band director Bob Hoffman, and Byron Tinder were all really big influencers for me to pursue this.”

Of course rising to where she is now took some bravery at times. From being an underclassmen sectional leader, leading older members of the band, LaFoy says though it took some getting used to, experiences such as that are what helped her reach these new heights.

“We have a leadership team here with the band which is largely student run,” LaFoy said. “In my sophomore year I interviewed for a marching section leader position and got it, the following year in my junior year I became a musical section leader, so I’ve kind of just been climbing up the ranks over time and trying to get comfortable with everything.”

“As for the Drum position I just thought I’d take a shot at it and if I didn’t get it, then it wasn’t a big deal, but I got it and it’s been so much fun. It’s a lot of work and I’ve had to step up a lot, but being in front of nearly 300 people, it really does something for your character and self confidence.”

With LaFoy being a music major, her rise within the band has given lessons, experience, and most importantly memories that will help her chase her goal of being a music teacher.

“Each position was an adjustment but it strengthened me,” LaFoy said. “These positions helped teach how to deal with conflict and all that stuff. Being a music section leader really strengthened my teaching ability which going to be helpful since I want to be a music teacher.”

“So, teaching at the college level was really nice, teaching 30 to 40 people the same rhythms and notes as we had some really challenging music. It’s all been so much fun though and has really helped as I’ve gotten out into this field.”

Though it has provided challenges of all sorts for LaFoy, she all of it has made her stronger. From overcoming first time jitters and performance anxiety, knowing how she got to where she is now make some other big thing look like a piece of cake.

“We have a lot of performance opportunities,” LaFoy said. “At first I struggled with some performance anxiety and my studio professor really helped me overcome that by taking things step by step. Going up in those increments really helped. Being in front of just under 300 people was at first quite a challenge because everyone is looking at you, but the more I got in front of people the more I could feel myself open up which also helped for when I do my work at a junior high school in front of like 40 people there which seems easy now after all the previous experiences.”

While some bands just do one show, the UNI Panther Marching Band has been busy with numerous shows, with music from various internationally known artists.

“We do multiple shows, in fact we have a new show every home game,” LaFoy said. “We started out with like a modern pop show, then we went to Earth, Wind, and Fire, playing songs like September and all their classics, and in our last show we did a Queen show which so far has to be my favorite, and now we are ready to perform a jazz show for our next time out.”.