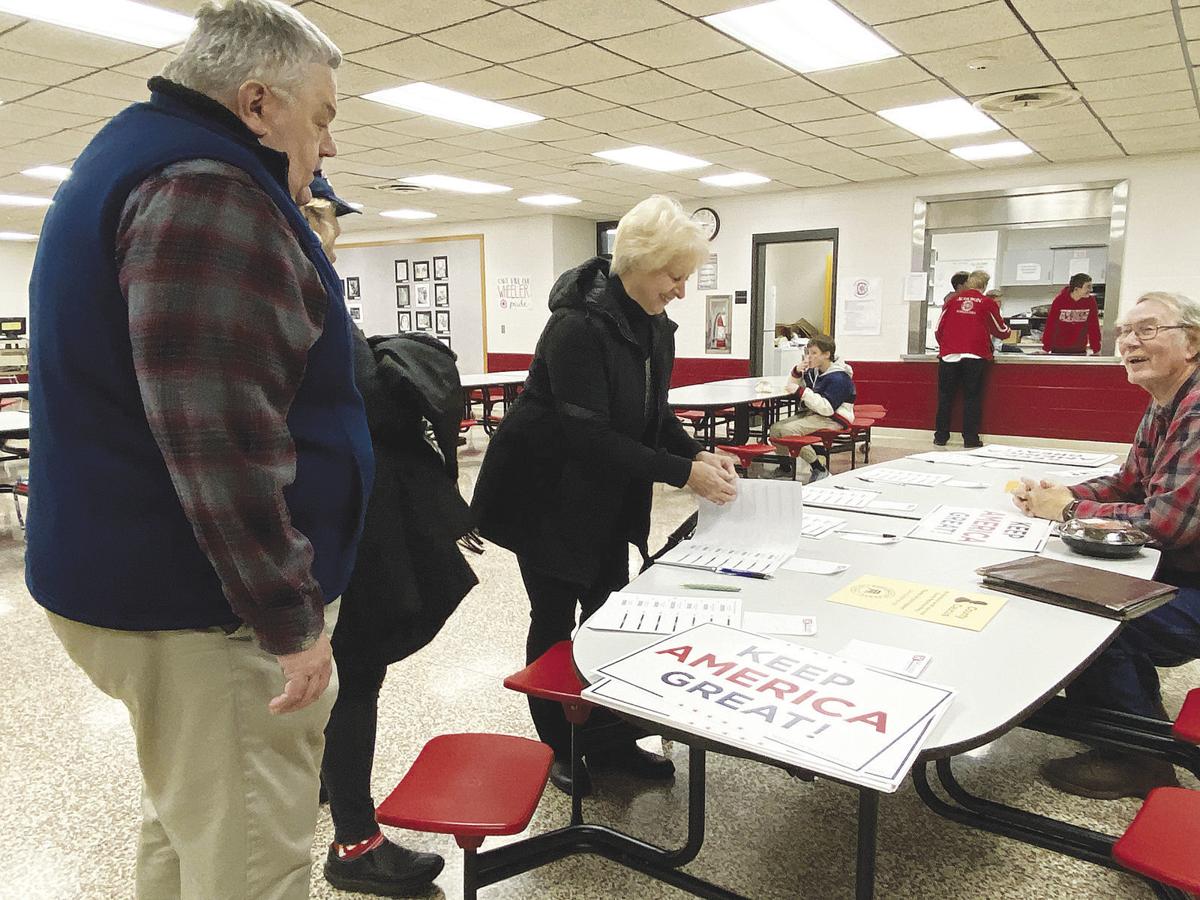 Republican Caucus participants were checking in at the Audubon High School on Monday night. 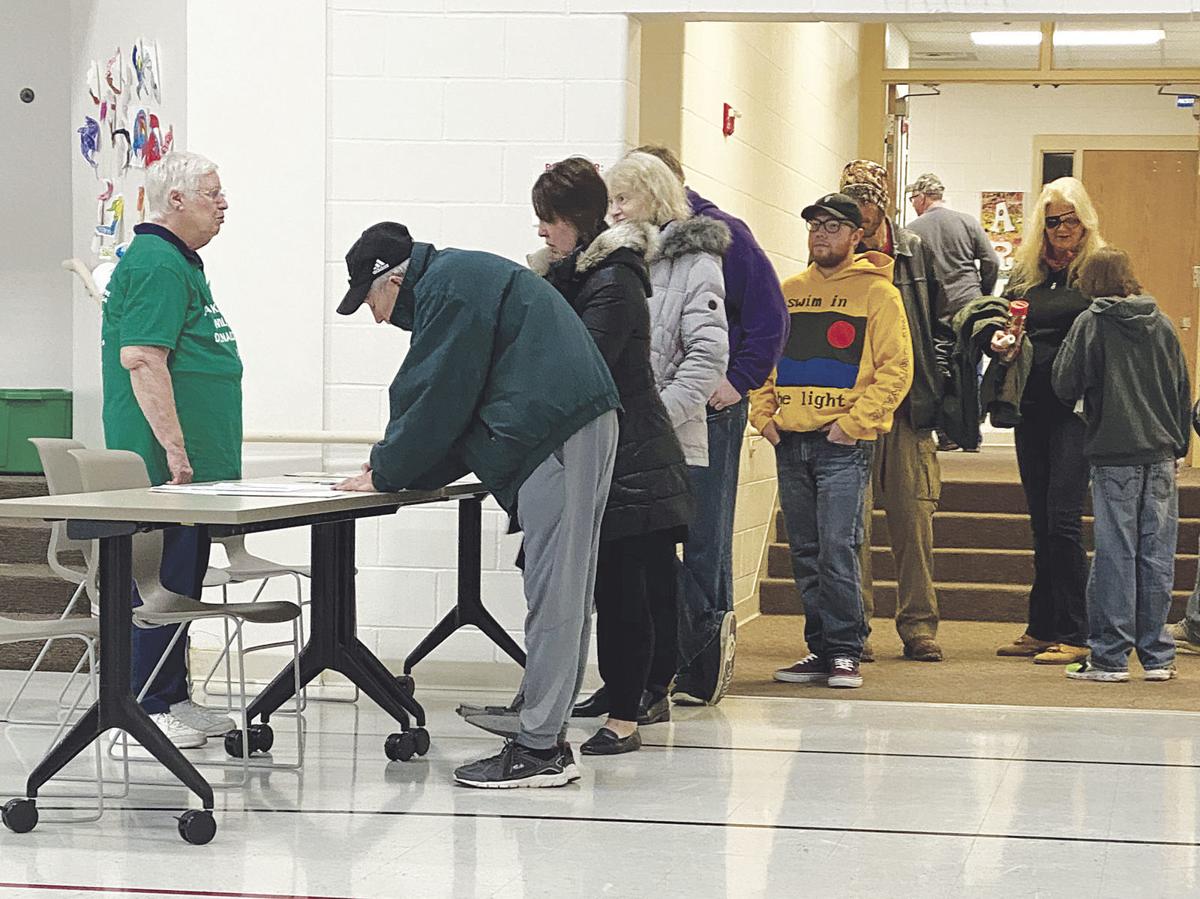 Republican Caucus participants were checking in at the Audubon High School on Monday night.

AUDUBON — On Monday night, Feb. 3, Audubon County Democrats and Republicans headed to different locations to caucus, and while officials at all four locations knew results from their caucus that night, statewide results were still not completely reported by the Democratic party early on Thursday.

For the Democrats in Precinct 1 turn out was 111, with a handful of observers including some who were working for different candidates campaigns.

Miranda Bills read a letter from Democratic Party Chair Troy Price, who thanked participants for coming to “do what we do best, organize and mobilize.”

Price said in his letter that caucusing was important as a “first step in building a strong grassroots organization to take our state and country in a new direction.”

Russ Cooner said he had come to caucus, “to beat Trump,” adding he’d like to see less tweeting.

Sue Barnes said she had attended about 25 caucuses, and had come this year so that she could choose the candidate she was going to support. “I want to vote in the caucus for the person I think is the best candidate to run for office,” she said.

Victoria Chargo, speaking in support of Mayor Pete Buttegieg, saying military service was an important part of her family, and felt having a candidate who was a veteran himself was important. “I think it’s time we had a veteran making decisions for our troops.”

Phil Mennenoh said he’d come because caucusing was his civic duty, and whether it was a presidential year or not, it was important for people to participate, “this (caucus) is no more important than the others.”

Student Sheridan Meese was on hand holding a sign for Elizabeth Warren. She said she’d come because her aunt was a precinct captain, and she was on hand to support her aunt, but she also had wanted to check out what happened at a caucus. “This is my first caucus, I wanted to see what it was all about,” then added, “It’s fun, I like it.”

Rodney Petersen Jr. said he had started out as a Yang supporter, but had decided instead to put his support behind Sanders.

“I am anti-war and anti-corruption,” he said, “And I feel strongly that Bernie is the best (candidate) to end those.” He said while the candidates tended to agree on about 95 percent of things, the 5 percent they don’t agree on “are huge.” He said he felt that the parties had a “football team” mentality, supporting their team no matter what, but encouraged all voters to “start voting based on issues.”

Caucus members heard some remarks from officials then broke up into groups representing their candidate choice. In the first alignment, the viable candidates included Bernie Sanders and Joe Biden with 17 supporters, Elizabeth Warren with 20, Pete Buttegieg with 23 and Amy Klobuchar with 17. Two candidates had supporters, but not enough to be viable. Andrew Yang had nine and Tom Steyer had 8, and those participants were asked to make another choice.

At the Precinct 1 Republican Caucus, officials were expecting a smaller turnout.

While getting everything set for the caucus on Monday night, Heath Hansen, precinct chair, said he wasn’t sure how many people to expect. “It could be up to 60 or 70 in a presidential year,” he said, but felt a closer number would be in the 30’s and 40’s. In the end, he was “happy,” with a turn out over 40 — 45 Republicans showed up.

Numbers attending could vary, “For each side (attendance) goes up and down depending on who is in office and how many candidates there are.”

“If the Democrats had narrowed it down to one candidate,” by now, he thought attendance would have been lower.

What all gets done at the caucus, he said, “(is) all about how many people have opinions.”

“Some local candidates might have things to say,” he said. “But what’s even more important than that are the (party’s) planks.

While the party members could get together and talk about the party’s platform, the caucus setting was perfect for something: “You can’t get down to the grassroots as much as you can at the caucuses.”

At the caucus people are encouraged to participate. “The little guy down the street gets to write down what the planks of the party should be. And that’s how you affect change from the county level on up.”

He said it was important to hear what party members are talking about. At caucus “you can really get people going on the things they are passionate about,” he said.

“You need to get people who are available but also responsible, passionate but also able to listen,” Hansen explained.

Both parties would also be electing their central committees, “and that’s a big deal, too.”

Adrian Nelson, of Audubon, agreed, saying that this year’s Republican caucus was important even though it wasn’t a presidential caucus for his party.

“Whether it’s a presidential caucus or (not), caucuses are still really important because they are a fundamental part of our government,” helping party members decide who to vote for. The candidates they chose are also important, because “They are the people who make the rules we have to follow,” he said.

Adrian is working on one of those other candiate campaigns: He’s with Steve Reeder’s campaign.

Reeder is running for the U.S. House of Representatives in Iowa’s Fourth Congressional District, for Steve King’s seat.

Adrian said this was the first caucus he was attending, “I had no idea what to expect,” but was ready to jump right in.

He got a chance to speak to those attending. “I have a letter from Reeder to read,” he said, adding he could answer questions, “and can help people find where they can get the information,” they need on Reeder and his campaign.

Leigh Nelson said she was attending the caucus both as an interested party member and as the Audubon County Republican Central Committee Chair.

While this caucus was not to choose a new presidential candidate, she felt it was important for Republicans to show up where they could help strengthen the party, locally and on the state and national level.

She said the Republicans she’d met and worked with didn’t necessarily have the same exact beliefs, but could still work together.

Going forward, she said, for the Republican and Democratic parties, “It’s important that people see what we have in common, rather than our division.”

If candidates can look at issues and find where the parties intersect — where both sides have common ground, much more could get done. She added, “It’s our commonality that will bring us together as a nation,” rather than the differences that divide the two parties. “And that’s what’s important,” she said.