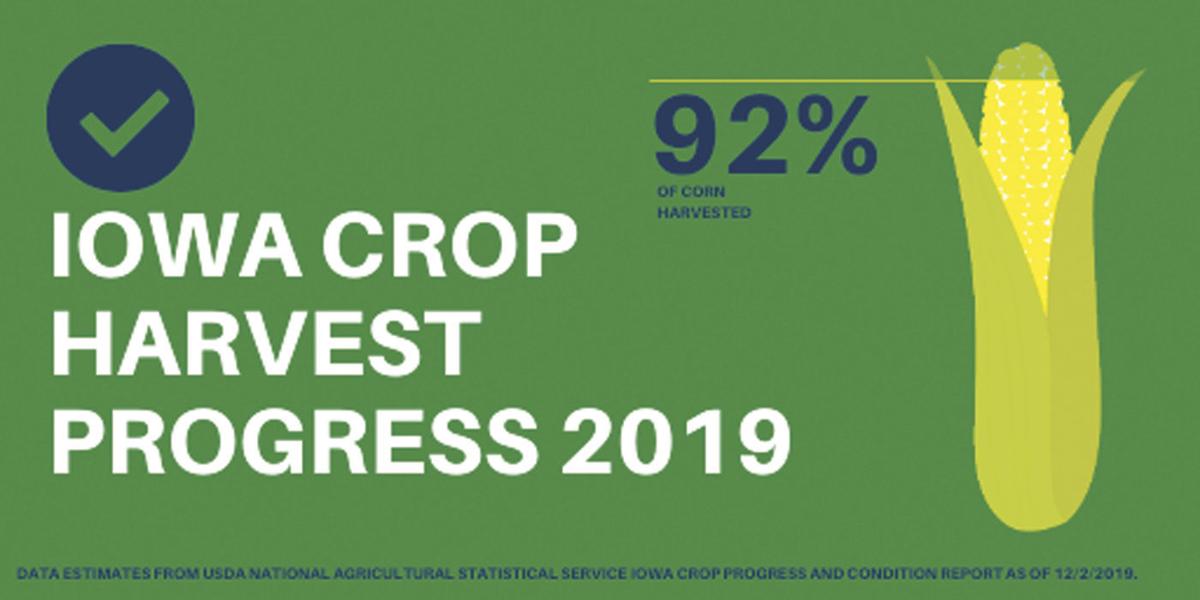 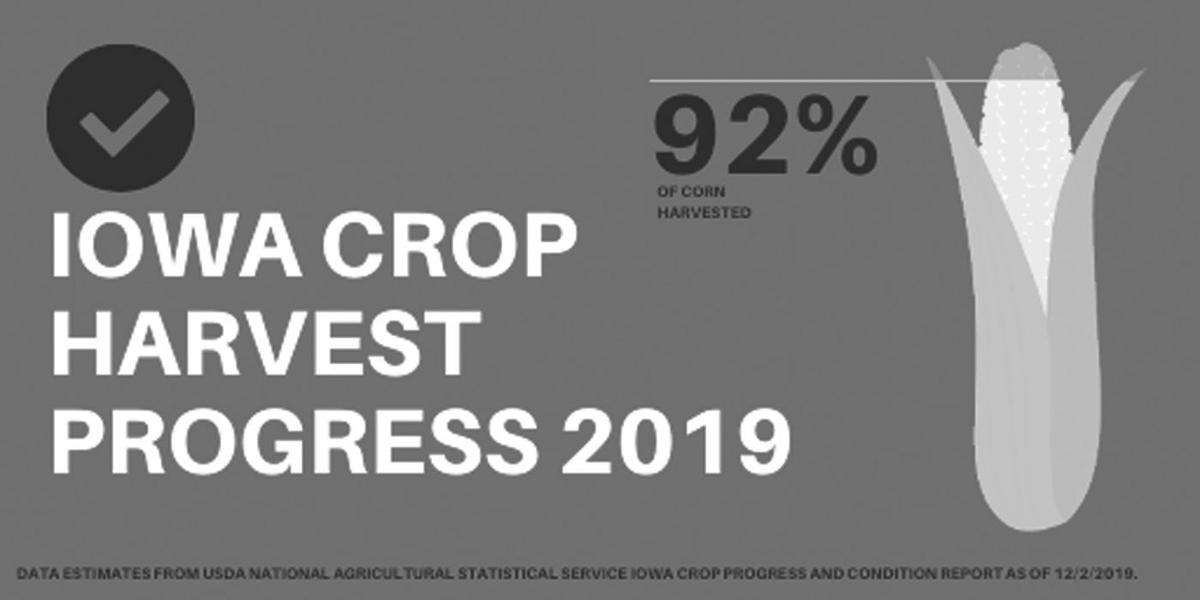 “Several days of unfavorable weather conditions kept many farmers out of the fields last week,” said Secretary Naig. “With corn and some soybeans still standing, this is the latest harvest since 2009, and farmers are anxious to finish up.”

The weekly report is also available on the USDA’s website at nass.usda.gov.

Rain and snow suspended harvest activity and limited other fieldwork across much of Iowa as farmers were held to 3.1 days suitable for fieldwork during the week ending Dec. 1, 2019, according to the USDA, National Agricultural Statistics Service. Wet conditions have producers inching toward the finish line as the 2019 harvest nears completion.

Ninety-two percent of the corn for grain crop has been harvested, 11 days behind last year and 2 weeks behind the 5-year average. Producers in the Northeast and South Central Districts had greater than 15 percent of their crop left to be harvested while all others had 10 percent or less remaining. Moisture content of field corn being harvested for grain was at 19 percent.

Livestock producers have been feeding hay and grazing cattle on corn stalks. Muddy conditions and snow covered fields have been unsuitable for making bedding for overwintering livestock.

Multiple strong low pressure systems brought active weather to the Midwest, capping off the last week of November. All forms of precipitation — from rain and snow to freezing rain and hail — were reported across Iowa. Much of the state experienced unseasonable wetness with up to an inch above average across northern Iowa. Only southwestern Iowa reported slight deficits. Above average snowfall was also reported across northwestern Iowa with anywhere from two to six inches above normal. In terms of temperature, Iowa’s statewide average was 4.5 degrees warmer than normal at 34.2 degrees.

Warmer than average conditions prevailed across Iowa through Sunday (24th) under partly to mostly sunny skies. Daytime highs reached into the upper 40s across northern Iowa while southern Iowa reported mid to upper 50s. The average statewide high was 53 degrees, 12 degrees above normal. Slightly cooler temperatures persisted into Monday (25th) as a weak cold front pushed through, shifting winds out of the northwest into the evening hours. Light rain associated with the frontal passage was reported at a handful of stations. Overnight lows remained well above average with departures up to 16 degrees warmer than average; the average morning low of 30 degrees was eight degrees above normal.

Cloud cover began increasing on Tuesday (26th) as winds shifted to the northeast ahead of the first low pressure to impact Iowa. A mix of rain and snow fell across central and southern Iowa and transitioned to moderate snow across northwestern Iowa during the nighttime and overnight hours. Near blizzard conditions were reported as strong northern winds built in behind the system. Sustained winds peaked above 30 mph with gusts in the 35-40 mph range; Estherville Municipal Airport (Emmet County) reported a peak wind gust of 47 mph with near whiteout conditions. Snow totals reported on Wednesday (27th) morning were highest in northwest and north-central Iowa with Sanborn (O’Brien County) observing 8.6 inches; over 40 stations reported totals above three inches.

Thanksgiving Day (28th) was overcast with light rain and snow showers. Liquid equivalent totals were generally under 0.30 inch while high temperatures remained in the upper 20s and low 30s. An additional wave of moderate rain moved through Iowa on Friday (29th) as temperatures remained above freezing. Heavier showers and isolated freezing rain were observed in Iowa’s northwest corner with stations in O’Brien, Plymouth and Sioux counties reporting totals over an inch.

Precipitation cleared the state during Saturday (30th) morning, though overcast skies remained across much of Iowa in advances of a third low pressure system moving through Nebraska. Highs ranged from the upper 40s north to low 50s south, where partly sunny skies allowed for warmer temperatures. Unstable atmospheric conditions during the late afternoon allowed isolated strong thunderstorms to form across central Iowa. A brief spin-up rope tornado was reported near Guthrie Center (Guthrie County), though no damage was observed. Pea-sized hail was also reported around the Des Moines (Polk County) metro area. As the last hours of November ticked away, the low pushed into Iowa, bringing light rain and snow showers across western Iowa as overnight lows hovered around the freezing mark; the average statewide low was 31 degrees, 12 degrees above normal. As of 7 a.m. on Sunday (1st) snow totals were light and generally under a half of an inch.

The 2010s in sports – The News-Telegraph's decade in review