You are the owner of this article.
Edit Article Add New Article
You have permission to edit this article.
Edit
Welcome, Guest
Home
News
Sports
Obituaries
Opinion
Local Events
Multimedia
Classifieds
Marketplace
+ More
Share This
1 of 2 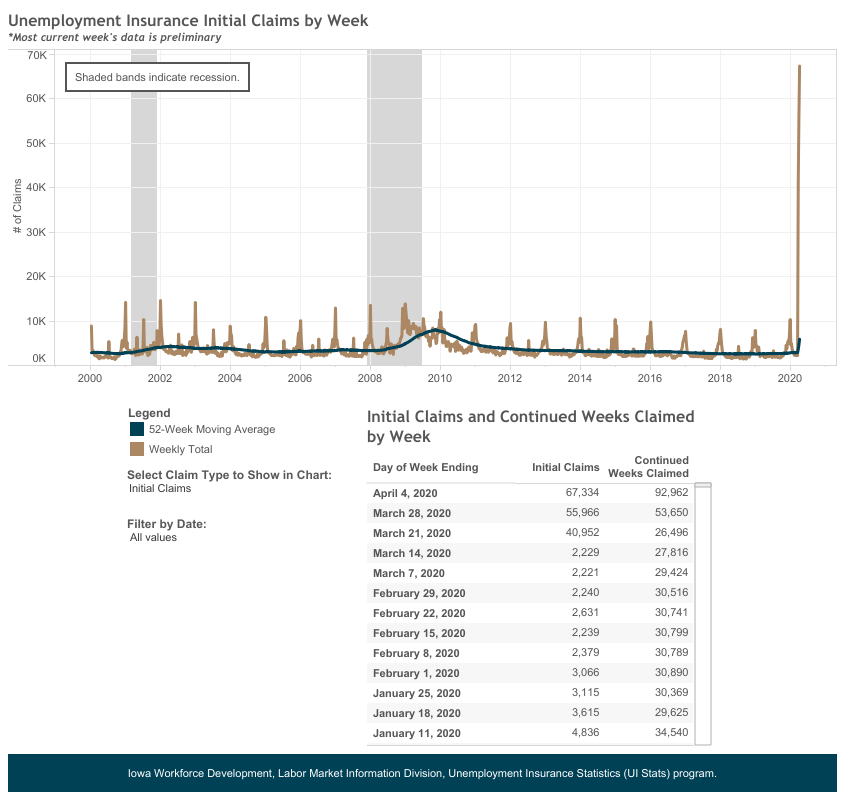 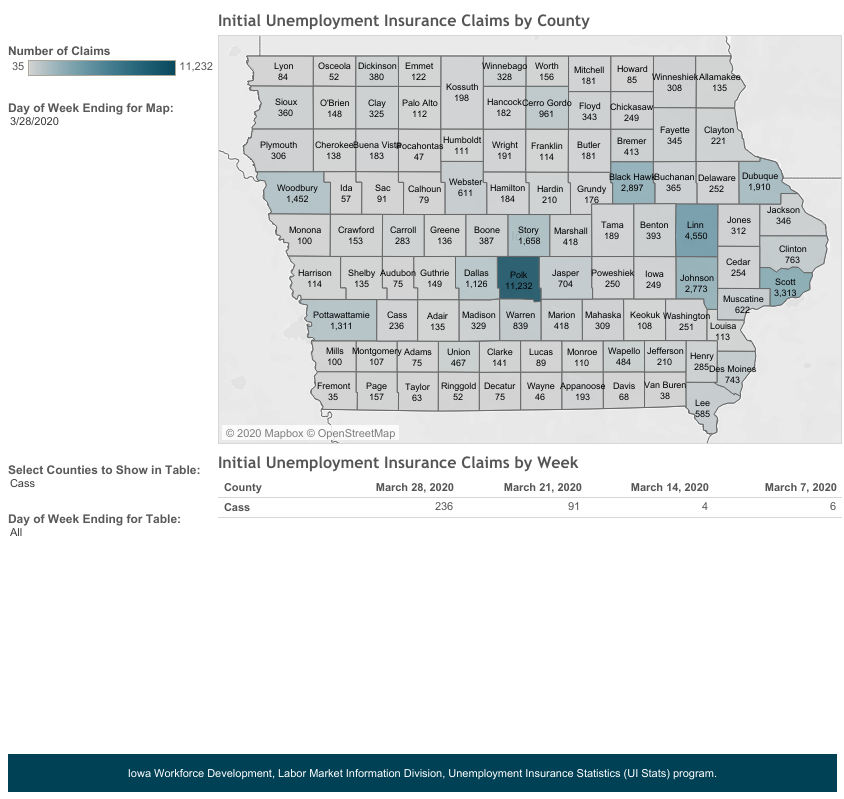 DES MOINES -Unemployment claims in Iowa took another big jump last week with the health care and manufacturing sectors beginning to feel the effects of the economic slowdown from the COVID-19 pandemic.

The number of continuing weekly unemployment claims is 92,962, a 20 percent increase over the previous week. A total of $27,565,232.79 of unemployment insurance benefits were paid to claimants for the same week.

Previous numbers were led by the service sector after bars and restaurants were ordered closed except for take and delivery services. This week, the health care and social assistance sector led the state with 9,632 claims closely followed by the manufacturing sectors with 9,218 claims.

The retail sector, which now has many businesses under a close order, reported just over 8,000 claims while the accommodation and food services sector reported 7,123 and construction just over 2,600.

Iowa Governor Kim Reynolds has been under pressure to issue a state-wide shelter in place order, a move she has said isn’t necessary after the actions she has already taken.

She has consistently argued that the actions the state has taken mirror shelter-in-place orders in other states following her state disaster proclamation issued on March 8. Since then, she has ordered schools to close for four weeks and followed that order up two days later with an order closing bars and restaurants and limiting gatherings to 10 people or less. On March 22,she ordered more business closings including salons and barber shops. On March 26, more retails were closed and all non-essential surgery, dental and orthodontic procedures were shut down.

She has since extended all those orders to April 30 and signed a proclamation closing all public campgrounds, cabins and yurts temporarily, as well as all outdoor playgrounds through April 30 and expanded her temporary closure orders to include malls, playgrounds, social clubs, pool halls, movie stories, libraries, museums, zoos, tobacco and vaping stores.

Iowa senator Joni Ernst has called for additional federal support for small businesses in Iowa through the Paycheck Protection Program, which was created as part of the Phase 3 relief package Congress passed recently. The program, though off to a rocky start with wonky websites and delays, is designed to provide loan support to small businesses across the country. Ernst is urging the Senate to secure additional funding to ensure this emergency relief program can continue providing support for small businesses.

“Iowa’s small businesses are the backbone of our state’s economy, and as we face this health and economic crisis, we absolutely must do all we can to ensure they are getting the support they so desperately need,” said Senator Joni Ernst. “I’ve been on the phone with hundreds of local employers and business owners from across the state hearing about their needs and concerns during these challenging times. We have a new loan program in place and resources are available, but we need to move swiftly to ensure the money keeps flowing and our businesses can stay afloat amidst this pandemic.”

Nationwide there were 6.6 million people seeking jobless benefits last week and more than one in 10 workers have lost their jobs in just the past three weeks to the coronavirus outbreak. All told, in the past three weeks, 16.8 million Americans have filed for unemployment aid and officials say more than 20 million people may lose jobs this month. The unemployment rate could hit 15% when the April employment report is released in early May.

The figures collectively constitute the largest and fastest string of job losses in records dating to 1948. By contrast, during the Great Recession it took 44 weeks — roughly 10 months — for unemployment claims to go as high as they now have in less than a month.

Claims for the self-employed can be retroactive to February 2, 2020, if there was a reduction in income or loss of employment related to the pandemic. We will post updates to our website when we begin paying these benefits.

In addition, the self-employed, independent contractors, gig economy workers and others who aren’t ordinary eligible for benefits may qualify.

Employers or claimants with questions can email Iowa Workforce Development at uiclaimshelp@iwd.iowa.gov We have been successful in answering most emails within 24 hours. Individuals may also call us at 1-866-239-0843.The agency is receiving many calls and wait times may be lengthy.

Our website contains videos, webinars, FAQs and other forms of assistance for all of the different types of claims and programs such as the most updated information on the CARES Act benefits and payments.

For more information on the total data for this week’s unemployment claims, please visit https://www.iowalmi.gov/unemployment-insurance-statistics.