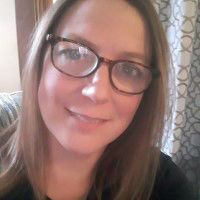 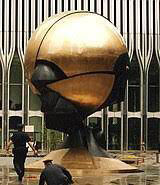 Jen Litton said she really enjoyed looking at this bronze globe sculpture, "The Sphere," by Fritz Koenig that sat in the plaza of the WTC.

Jen Litton said she really enjoyed looking at this bronze globe sculpture, "The Sphere," by Fritz Koenig that sat in the plaza of the WTC.

A 1993 graduate of Griswold High School, I moved to New York following graduation from Iowa State University. I lived in Manhattan and wrote for magazines like American Baby, Teen People, Instyle, Time Out New York and others. (My first job as a writer was for the Atlantic Hy-Vee employee newsletter. Later, I also worked at the Atlantic News-Telegraph.)

I lived in New York for almost five years. During that time, I spent many hours at the World Trade Center. I was enrolled in a personal development course with weekly sessions that my girlfriend Susanna had recommended to me. I also volunteered for the organization by making phone calls from the 15th floor of WTC One. After the towers fell, I remember thinking about the brown leather couch that sat in the break room.

I used to love to rollerblade down the West Side Highway bike trail and spending time in nearby Battery Park City. I really enjoyed looking at the bronze globe sculpture "The Sphere" by Fritz Koenig that sat in the plaza of the WTC.

At 25, I was a very comfortable resident of downtown Manhattan.

On the morning of Sept. 11, I was riding the train from New Jersey after staying with my relatives. The two plane crashes happened while I was underground. Word spread fast among the train car and people were in disbelief.

I departed from Penn Station on 34th street and looked around unsure of what to do. I came across a friend who let me use his cell phone which was still working. I called my aunt and she told me to get on the next train back to New Jersey.

The next day, my mother, Barb Schroeder told me that many people called their house asking about me. I was safe.

Two weeks after the tragedy, I went back to the city for the first time. People were gathering in Union Square with candles in remembrance. I met up with friends and we decided to walk down to see the wreckage. It was not unlike a regular night in New York that one would set off walking many blocks with friends to one place or the next.

We arrived at about 9 p.m at night. The sickening air smelled burnt and like death. The storefront windows on Broadway clung with dust. Everyone passing by had mournful expressions. The wreckage was devastating.

My reaction was to write a poem. I taped it to a non-working ATM. A military member saw what I wrote and invited me into St. Paul's Chapel where many rescue workers were huddled for a break from working in the pile. I could help out in any way I could. Another worker told me to put on a mask and bring a bucket of water bottles to the firefighters, so I did that.

A handful of firefighters were sleeping in a big canvas tent located in the center of the rubble. They were exhausted from their long shifts. I spoke with one firefighter from Brooklyn named Jonathan Winters. All of them were tired and in shock.

Looking over to the east, I could see the Deutsche Bank still standing. It was black with soot and I remember there was talk of concern about it also falling down.

I remember seeing a police chief writing down in a big black ledger the list of the human remains the group would find in the rubble and where they were located.

On the ground, I saw a computer floppy disc, a large bolt, and many, many white office papers with the edges burnt.

I was between jobs and I had the time so I found myself staying through the night at St. Paul's Chapel and ended up walking over to a boat on the Hudson River that the American Red Cross was sponsoring at about 7 a.m.

On the sidewalk leading up to the boat, there were outdoor showers to wash off the soot. There was a large breakfast offered. There were men in uniforms smoking and drinking coffee sitting at tables in the entryway. It felt similar to being at a community church, but most all were shellshocked and numb.

Many of my friends lost friends and relatives. One of my friends lost a 34-year-old relative who worked at Windows on the World restaurant booking banquets and parties. Her name was "Jackie Sayegh Duggan." I remember the day they posted her name in the New York Post after they had identified her remains.

I remember months later seeing pictures of a table perhaps at the Marriott World Trade Center that was deserted. Plates of food were left untouched, a coffee cup half-full. That image has stayed with me.

I remember being interviewed by Tom Robinson for the radio when I moved back to Iowa on the first anniversary of 9/11.

The sadness of young and old lives wiped out in an instant is unbearable. Each year, the anniversary is difficult. A lot has happened since then, but one thing is for certain, life has never been the same since that day.