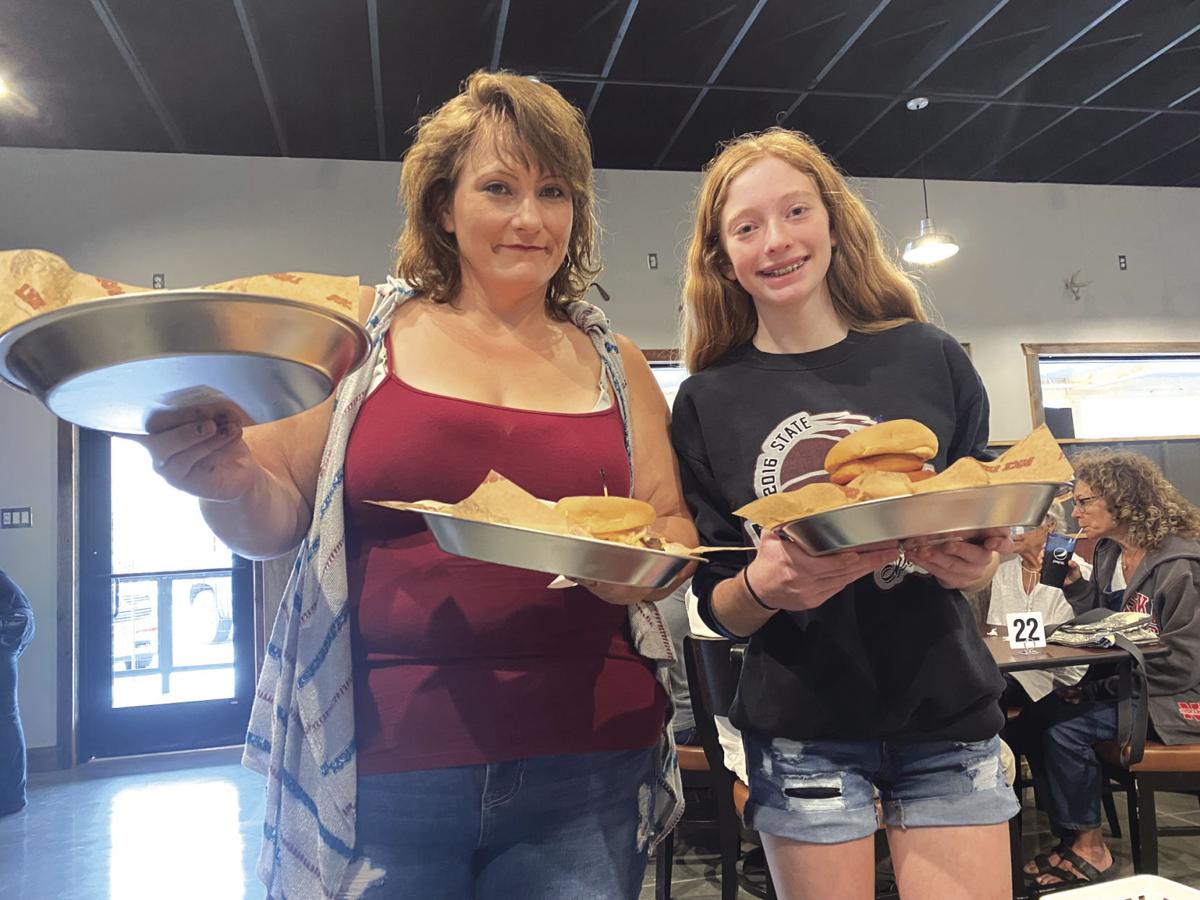 At the Buck Snort you order as you come in, get a number and food is brought to your table by the staff. Part of the building has tables while another part includes a bar. 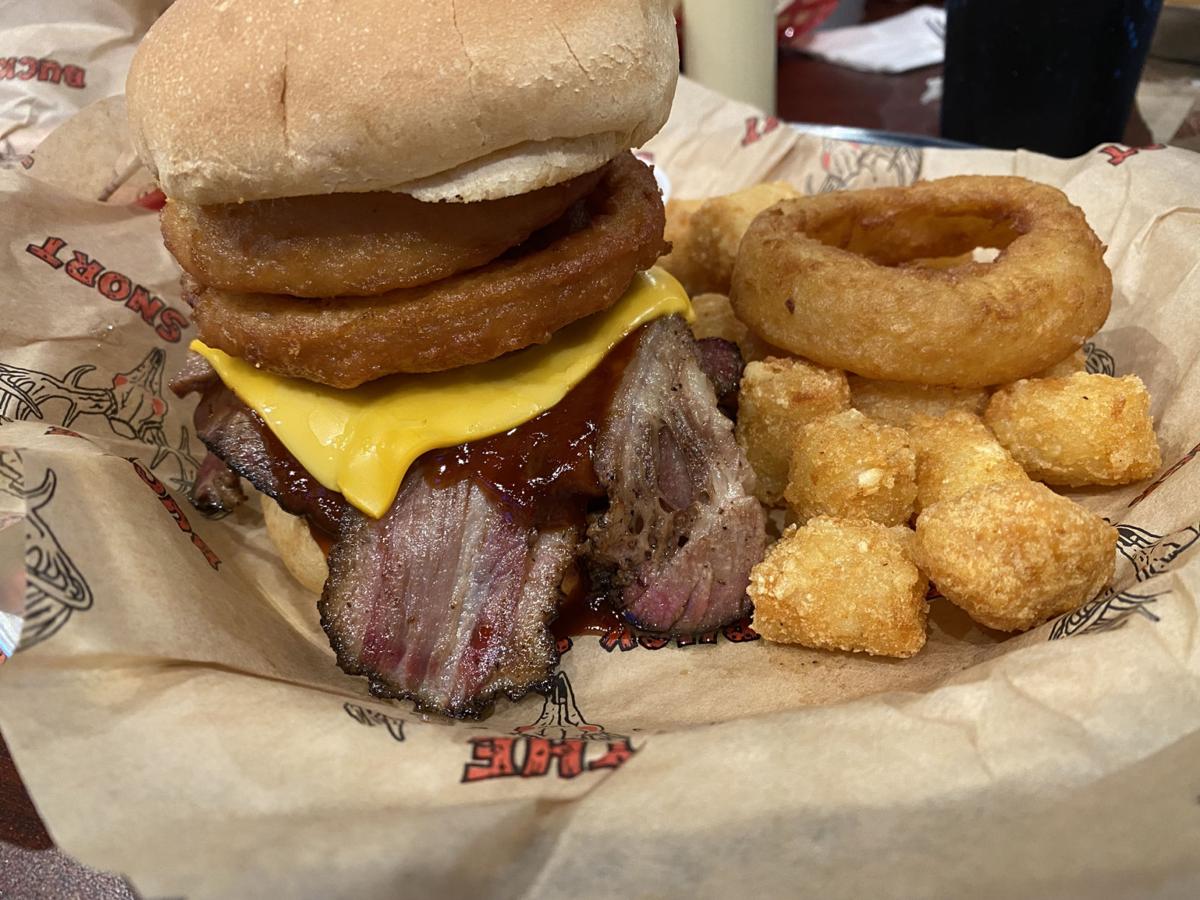 Delivering sandwiches and smiles. These crew members were delivering some unique hamburgers, including a Swamp Donkey burger. It had a hamburger patty, covered in brisket, with barbecue sauce, American cheese and onion rings.

At the Buck Snort you order as you come in, get a number and food is brought to your table by the staff. Part of the building has tables while another part includes a bar.

Delivering sandwiches and smiles. These crew members were delivering some unique hamburgers, including a Swamp Donkey burger. It had a hamburger patty, covered in brisket, with barbecue sauce, American cheese and onion rings.

EXIRA — More than four years after a fire destroyed a bar and other businesses on Exira’s main street, a new restaurant and bar is open and ready for business in that same spot — filling the empty spot and a need in the community.

Brandon Wilkins, an Atlantic high school graduate, runs a Buck Snort Restaurant in Neola, but was approached by a builder about opening a location on the site of the fire that leveled several businesses there in 2017.

The Buck Snort Restaurant, at 100 Washington Street, offers appetizers, burgers, sandwiches, wraps, sides, salads and pizza and also has a bar — owner Brandon Wilkins said the liquor license came in about an hour and a half after they opened on Thursday, allowing them to start serving the first day.

The menu at all Buck Snort Restaurants is basically the same, including a wide variety of items with creative names like the Swamp Donkey, a one third pound burger with brisket, American cheese, barbecue sauce and onion rings. Looking for something bigger? Try the Moose Burger with two one third pound hamburger patties, two fried eggs, American and Swiss cheese, two slices of bacon and topped with their special Moose sauce.

Wilkins said, “Fortunately the person I franchise with has given us carte blanche for special menus, but he said for at least a while he was going to hold off on adding special items.” Things like seasonal specials and fish specials for Lent would be coming once the crew got more confident in their skills.

He said he is still looking to fill some positions at the restaurant. “With the limited amount of time I have, I really only have one day to interview,” he said, but added, “I’m still looking for people to fill out (the staff) so that the people we have already working don’t get burned out.”

Paper applications are available at the store, along with applications on the website. “I’ve given out my phone number on Facebook, anyone interested can just call me, whatever way they want to reach out,” he said, “We’re willing to talk and sit down and have an interview with them.”

While the restaurant is busy, Wilkins said, “It’s been overwhelming but satisfying to know that so many people were happy that we are there.”

He said he wanted to get involved with the community and give back. For example, he said he hoped someone would be able to come and pick up their empty beverage cans, to donate them to the fireworks fund for Exira’s Fourth of July celebration.

“We want to get involved with community organizations and make sure that they know that we’re here to support the community, as well as them supporting us, it’s a two way street,” he said.

Community support also played a part in getting the walls of the restaurant decorated with a variety of items from deer heads to sports memorabilia. He said members of the public had brought in items and he was hoping to get some items from back when the Exira sports teams were known as the Vikings, before they became the Spartans.

He asked the public to “bear with us, as we get through these first couple weeks. I know that food times are a little longer than they are used to.”

Wilkins said, “I really appreciate Exira for giving us the opportunity to come and serve them,” adding, “I want to thank (the Exira community) for having us, I’m looking forward to this relationship that we are starting to build,” he said.