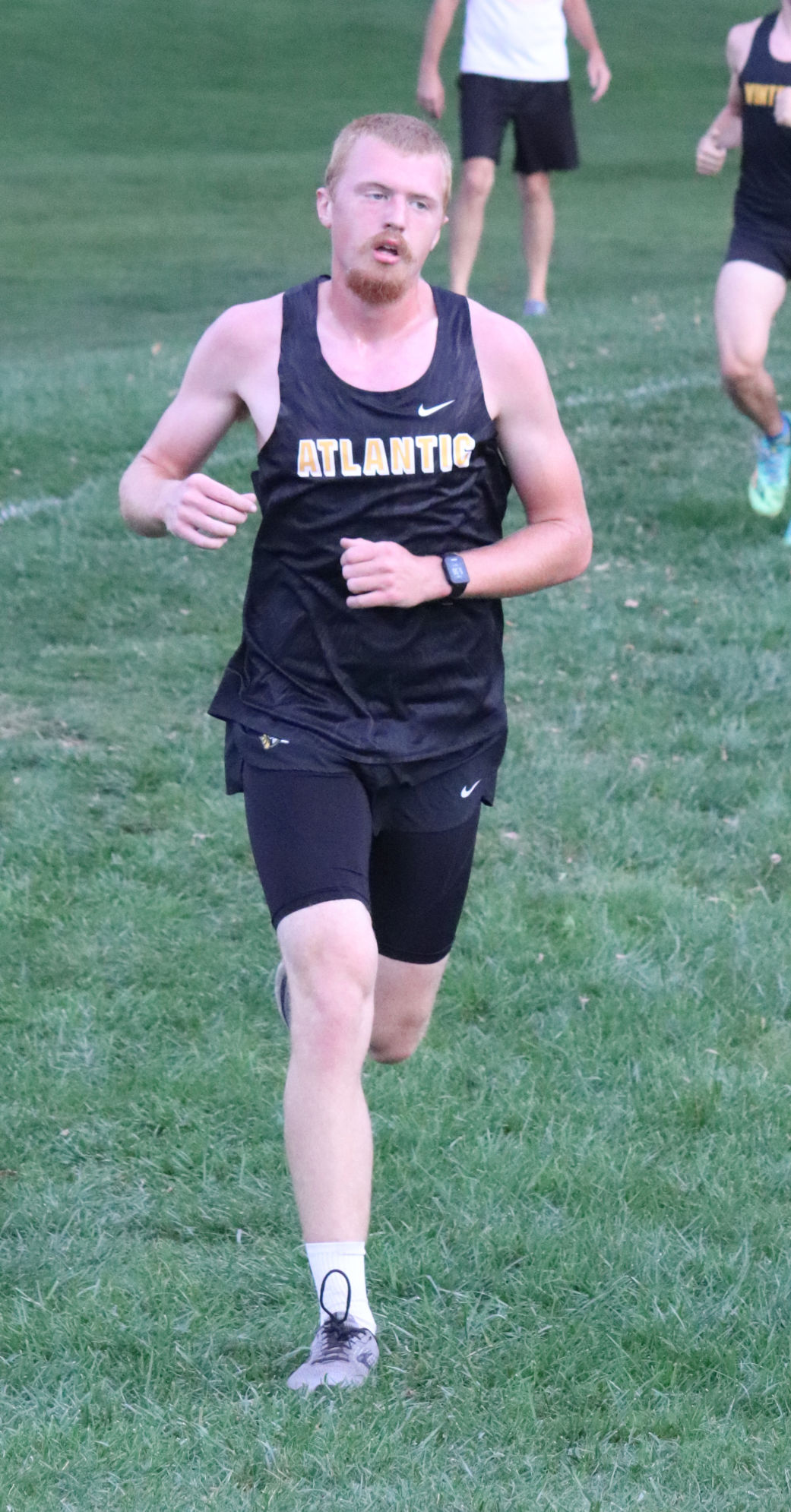 Zane Berg for Atlantic near the end of the second mile. 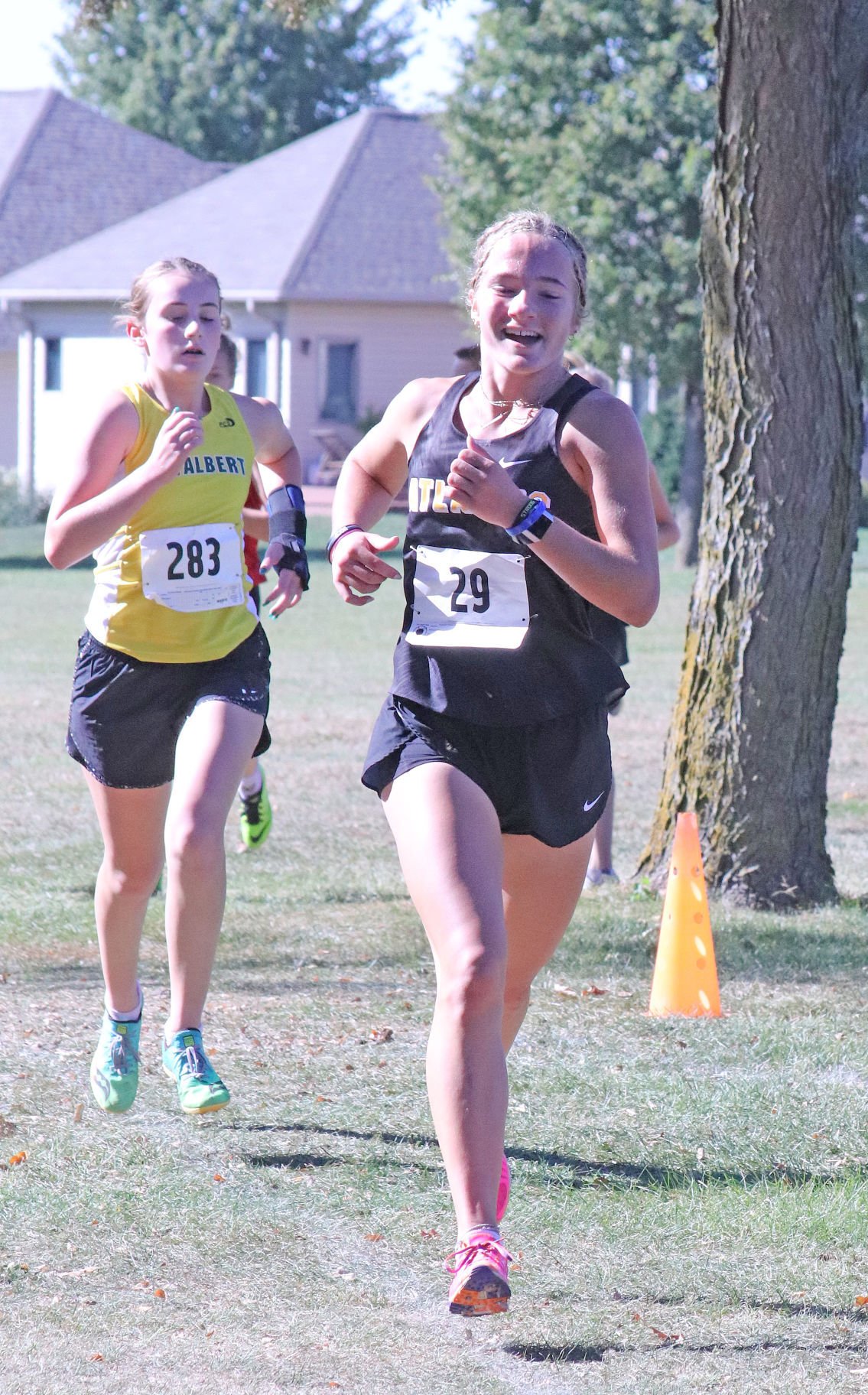 Atlantic’s Claire Pellett smiles as she’s having a good time in the first mile of the Harlan Invitational Saturday, Sept. 25.

Zane Berg for Atlantic near the end of the second mile.

Atlantic’s Claire Pellett smiles as she’s having a good time in the first mile of the Harlan Invitational Saturday, Sept. 25.

GLENWOOD – It’s always a nice day for a run.

Especially if you’re involved in the sport of cross country.

And it’s all built to the two biggest meets of the season, the first which is set for a Thursday running at Glenwood Lake Park: The Hawkeye Ten Conference meet.

The state qualifying meet in all four classes – assignments have yet to be announced – comes over two days next week, Oct. 20 for the big schools (classes 3A and 4A), Oct. 21 for the smaller schools – but this is the one that sets the stage.

While another year of illnesses and injuries have taken their toll, the conference meet might well be one of the first meets all year where everyone is healthy for both boys and girls.

Senior Addie DeArment is coming off a hamstring injury and ran a fine race at last week’s Trojan Invitational, her first meet back since the season opener at – incidentally enough – Glenwood Lake Park. Junior Ava Rush hasn’t been at every meet, as she’s also been busy with volleyball meets that have sometimes been on the same night.

On the boys’ side, the season began with returning state qualifier Zane Berg at the head of the class. But plenty of off-season training has paid off for Drew Engler, and it is he who has consistently been the top Trojan, coming in just ahead of Berg at most meets this year.

Teamwise, the Trojans were third on both sides. Craig Alan Becker, who has since graduated, was the individual champion on the boys side. Taylor McCreedy was capping off her senior year with a bronze medal in the girls’ race.

The then-underclassmen have stepped up, and now it’s their turn to take the spotlight.

Back from the 2020 meet a year ago for the girls are Rush, DeArment, Claire Pellett and Faith Altman. Belle Berg has been the consistent No. 3 runner for the Trojan girls, with various others filling in at times this year: Hailey Huffman, Mariah Huffman, Aspen Niklasen and Claire Wiederstein.

On the boys’ side, Berg, Engler, Ty Williams and Bennett Whetstone, all whom have consistently been on the varsity this year, are back and have been the anchor of the team. Rounding out the varsity lineup at the Trojan Invitational last week were Devon Fields, Mason McFadden and Alex Sonntag, while Isaac Altman, Luke Irlmeier, Nathan Pobanz and Christian Thompson have been part of a competitive 5-through-7 part of the varsity lineup.

Rush was ranked 17th in the in the latest Class 3A Iowa Track Coaches Association girls’ rankings. Pellett has also seen time in the girls’ rankings, while on the boys’ side, Berg began the year in the top 10.

Expect each of them, along with Engler, to be in the top 10 mix of their respective races.

Others to watch? On the girls’ side, Harlan freshman wonder Lindsey Sonderman has come on strong in recent weeks and was ranked fifth in the Class 3A IATC rankings. Cyclone teammate Kaia Bieker was 15th, followed by Class 3A No. 16 Lola Mendlik of Denison-Schleswig, Class 2A No. 10 Mayson Hartley of Clarinda, and Class 1A No. 21 Tyler Tingley of Council Bluffs St. Albert.