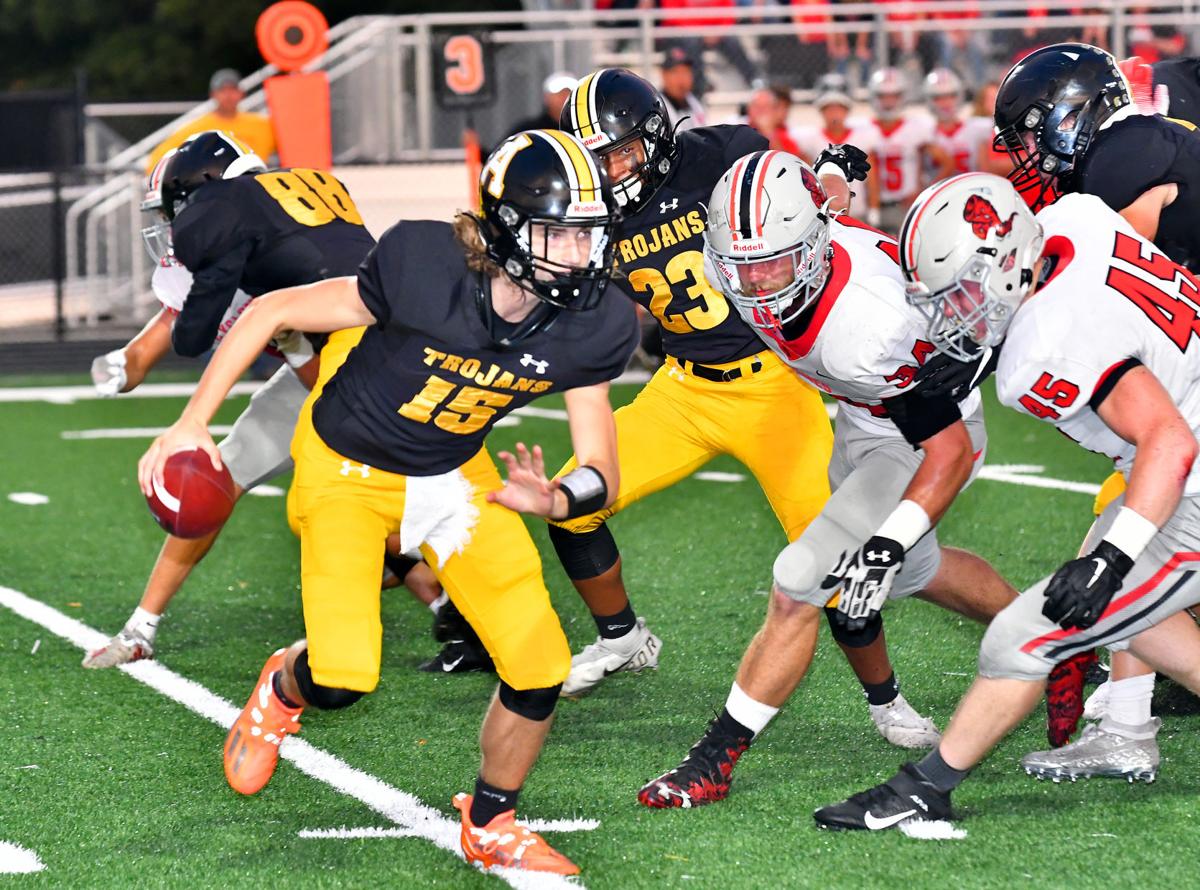 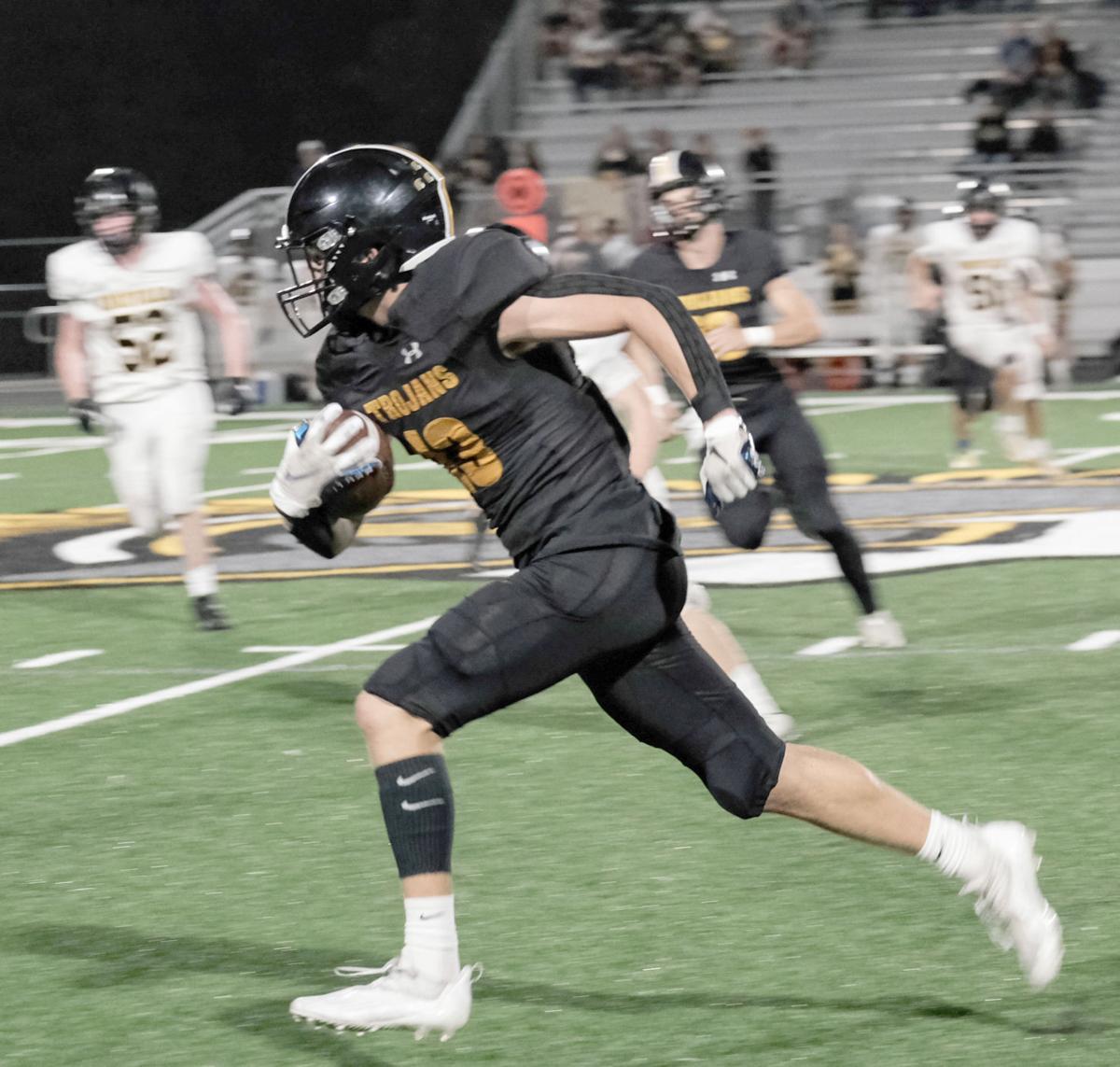 Atlantic snapped its three-game skid in emphatic style last Friday night with the 42-6 win over Knoxville.

Everything seemed to go right: A 142-yard, two touchdown performance by fast-emerging running back Dante Hedrington, complementing 53 hard-charging yards by fullback Tanner O’Brien. (That was the same number of yards, by the way, that Hedrington had on his touchdown run, the game’s first play from scrimmage.) Wide receiver Dayton Templeton caught five passes for 66 yards and a pair of touchdowns, including a 23-yard reception.

The defense had one 60-yard interception return, thanks to a tip by Jarrett Armstrong that led to Logan Tarrell’s highlight-reel run. And special teams were also spot on, with Lane Nelson having five kickoff touchbacks while limiting the Panthers’ returns on punts and kickoffs.

“The kids played really well and having a homecoming atmosphere really helped,” said coach Joe Brummer. “That first play we had definitely lit the spark and set the tone for the rest of the game.

The Trojans, which improved to 2-5 on the year and 1-2 in Class 3A District 6, will be looking for more of that success when they make their longest trip of the district football season, a trek to suburban Des Moines to play Saydel.

Saydel is 0-7 on the season and has dealt with controversy surrounding its coach, Austin Stubbs, after he was placed on administrative leave. Jacob Santos has served as interim coach in the meantime.

Despite its record, Brummer noted that several Eagles players have had good seasons and are of concern.

Lause (40.5 tackles, 3.5 for loss) and Chally (37, including a quarterback sack) are the leaders on defense. Chally also has forced three turnovers, including a pair of interceptions. On special teams, Chally has averaged 20.3 yards per kick return and also has a 29-yard punt return.

Despite the record, Brummer isn’t taking things for granted. They’re a good district opponent that has been on the wrong side of some games they could have had a chance at, including a 28-18 loss to Knoxville.

“They have a good quarterback that can sling the ball, and if we let him get comfortable back there, bad things are going to happen,” he said. “It’s going to be about disrupting his timing and rhythm. We’re definitely trying to focus on the 7-on-7 the passing part of the game this week.

“They’re dangerous if you let them be,” he continued, noting that his team is used to playing a pass-heavy offense and it’ll be up to having the front six disciplined. “They spread you out in space and if you don’t do a good job of finishing they’ll make the most of it and they’re going to score.”

The Eagles play a 5-3 front, trying to funnel the run in. Brummer said that Gavin Goodwin and Lause are solid threats at the inside linebacker positions.

A solid win over the Eagles would be huge for the Trojans, as now the focus is finishing on a winning streak. Each year since 2017 the Trojans have been no worse than 4-5, and getting the win over Saydel would give them momentum going into the season finale against Creston, a team that’s in the hunt for one of four at-large playoff berths statewide. (Harlan and ADM are the likely two automatic qualifiers from District 6, so Creston would have to qualify via at-large.)

This game will be about perfecting the details, getting first steps, eyes and reads correct, the coach said. Penalties will also need to be kept under control: the Trojans were flagged six times for 60 yards after recording none a week earlier against Harlan.

“We’ve got to keep this momentum going forward,” he said. “We’re really hoping we do a good job going one game at a time.”