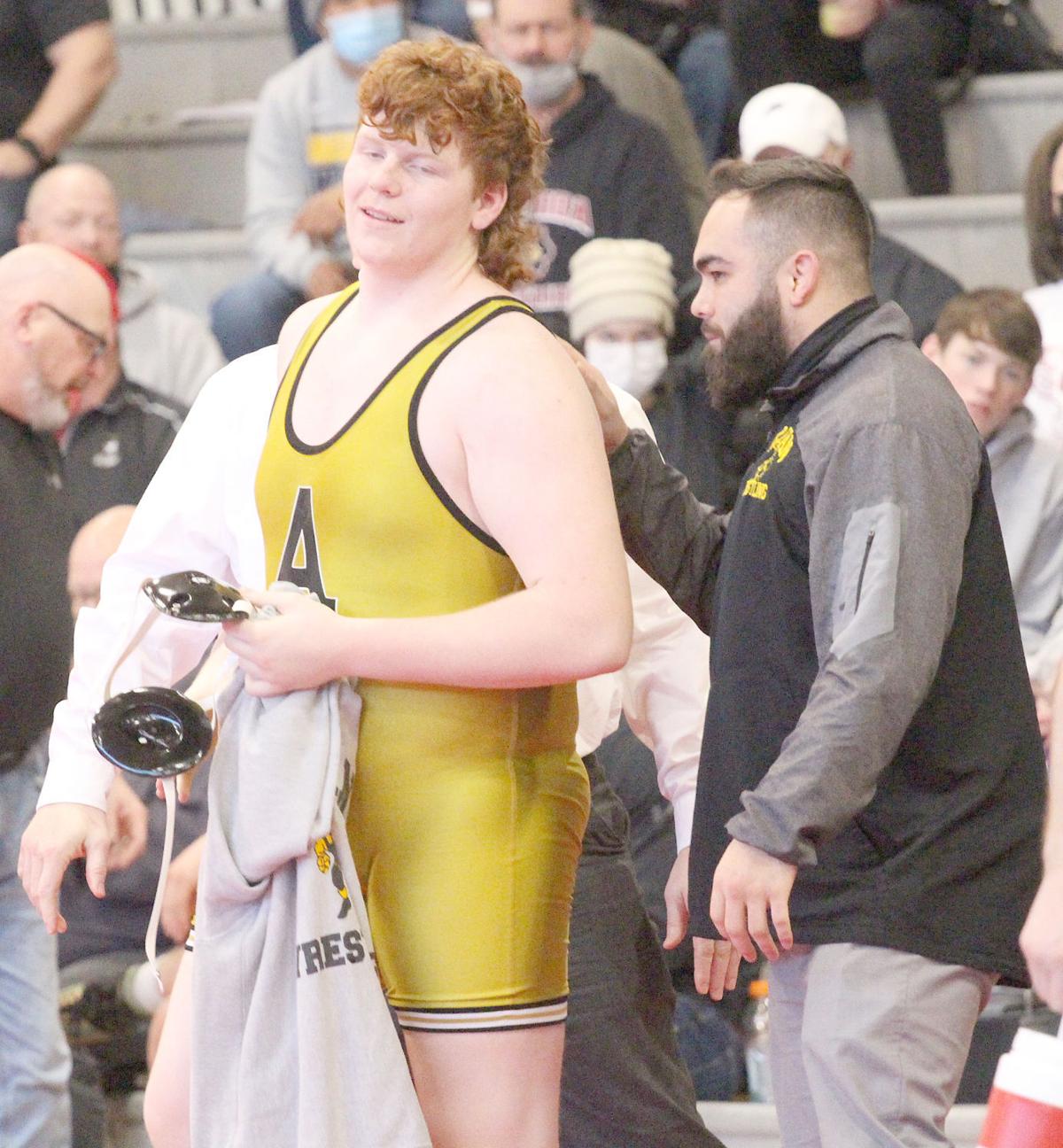 The stuff dreams are made of. Coming into the post-season with a sub-.500 record, Atlantic-CAM sophomore Dorscher pulled off a semifinal upset and earned a spot at the Iowa Class 2A state wrestling meet with a runner-up finish at Saturday’s district meet in Creston. 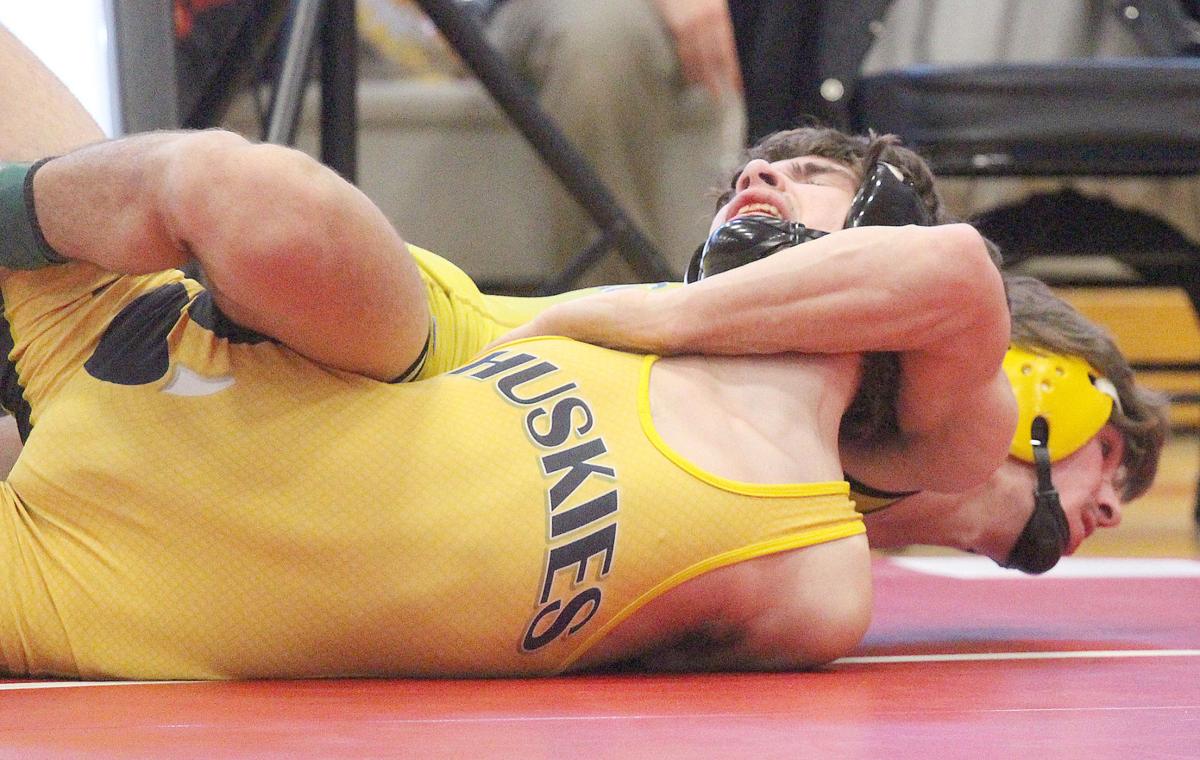 The stuff dreams are made of. Coming into the post-season with a sub-.500 record, Atlantic-CAM sophomore Dorscher pulled off a semifinal upset and earned a spot at the Iowa Class 2A state wrestling meet with a runner-up finish at Saturday’s district meet in Creston.

CRESTON – The second half of the season, Tristan Dorscher figured it out.

With an 11-13 record coming into the post-season, the Atlantic-CAM sophomore figured out the mechanics of wrestling.

It’s gotten him few in his position have earned, but earned it he did: A trip to the state wrestling meet at Wells Fargo Arena in Des Moines.

“I don’t even know what clicked. I just started to figure out the mechanics of wrestling,” said Dorscher, the 285-pounder who pulled off a stunning semifinal upset and went on to take the runner-up spot at Saturday’s Iowa Class 2A district meet in Creston.

“It feels amazing. I have no words,” he continued. “I’ve got chills going up and down my body right now. Just excited.”

Dorscher was the underdog in his match against Clarinda’s Logan Green, who was 38-8 going into the match and already had a pinfall win over his Trojan opponent.

This time, as Green tried to bull-rush about 15 seconds into the match, Dorscher grabbed him in the underhook, flattened him like a pancake and squeezed and never let go. Green tried to cover his eyes to get some leverage, but at the 36-second mark, the official signaled the pin and Dorscher had the upset of the afternoon.

Winterset’s Dugan Tolley got the upper hand in the title match with a convincing pinfall win, but Dorscher watched with anticipation the third-place match between Green and Creston’s Chris Wilson.

When Green finally scored a takedown late in the first sudden-victory overtime period, Dorscher knew he could pack his bags for Des Moines.

Dorscher didn’t wrestle in middle school. But physical education teacher Tim Duff, the Trojans’ head coach, thought he might have potential and encouraged him to go out, recalled Dorscher.

“I wanted to wrestle in middle school, but I don’t know why I didn’t,” he said. “Coach Duff was trying to push me because he thought I’d be good at it.”

His freshman year was rough, but with his training partners – Cale Roller, last year’s fourth-place finisher, and others – helping out, Dorscher gained the foundation.

This year, Dorscher has a 13-15 record going into what will be his first state meet. To be sure, he’ll have work cut out for him, but Dorsher has now plenty of help in knowing what to do and what to expect.

“My partner, whom I’ve had in the room, Devin McKay, he helped me a lot. Same as coach (Connor) Larson and (Tim) Duff, they all helped me,” said Dorsher.

Dorscher is one of four Atlantic-CAM wrestlers who’ll be wrestling in Des Moines at this week’s state tournament.

Joining him will be fellow first-timers Ethan Follmann (120) and Kadin Stutzman (170), both juniors; and senior and three-time qualifier Joe Weaver (126).

Stutzman, who didn’t reach the district meet a year ago, broke through this year and picked up a 10-2 win over Winterset’s Brady Barringer in the championship. It was the second time in two weeks Stutzman bested Barringer.

During the pandemic-impacted off-season, Stutzman wrestled 1-on-1 matches with assistant coach Larson, learning to control ties and setting up shots. He also found time to wrestle in national tournaments against some of the nation’s best and had weigthroom workouts.

“Same type of win as last time, control the ties and score on top,” said Stutzman, who improved to 31-2 on the year. “I fell short the last two years. I’ve just got to get it in my head that I’m the better wrestler.

“Just full six-minute matches. You’ve got to be in real good shape to make it through that tournament. You’ve really got to believe you’re the best,” he continued.

Follmann also has come close in the past but couldn’t quite cash in. This year, he didn’t need a wrestleback to earn his spot, despite a 12-7 loss to Glenwood’s Matthew Beem in the final. Follmann earned his spot with a convincing win over Creston’s Austin Evans in the semifinal.

Beem got the upper hand this time around after Follmann handed him a pair of losses at the recent Rollin Dyer Invitational. Still, Follmann wasn’t too upset.

“Feels pretty good to be able to go to Wells Fargo and be able to wrestle some of the best in the state of Iowa,” said Follmann, who’s now 29-4. “Coach Duff put us through some good practices and worked the district guys real hard, worked with some other teams and preparing for tough competition at districts and it paid off.”

Weaver will be looking to place this time around after just missing the medal stand. He earned his spot after a major decision in the semifinals and a technical fall victory in the title match over Winterset’s Jake Porter.

It’s always been a goal of Weaver’s to place at state.

“It’s my last go-around and my last shot. I’m just going to go out and wrestle how I can and see what happens,” Weaver, now 40-8, said. “They’re the best kids at state and everyone there is tough and there for a reason.”

Of the four wrestlers whose road to state came to an end, three are underclassmen.

Sophomore Brian South had a big late-season run and got a late pinfall of Karson Downey of Clarinda to advance to the 145-pound championship. However, he could not reignite his magic against Central Decatur’s Logan Jones, falling just short 5-2 in the championship match. He had to wrestle back for a shot at state, but Creston/Orient-Macksburg’s Keaton Street held off South 8-4 to end his state bid. South finished 26-24 on the year.

Senior Payton Fewson ended a strong career with Atlantic after finishing fourth and a season mark of 21-21. Also ending their seasons were two sophomores who will be key parts of the lineup next year: 106-pounder Clevi Johnson (19-17) and 152-pounder Tanner O’Brien (28-23).