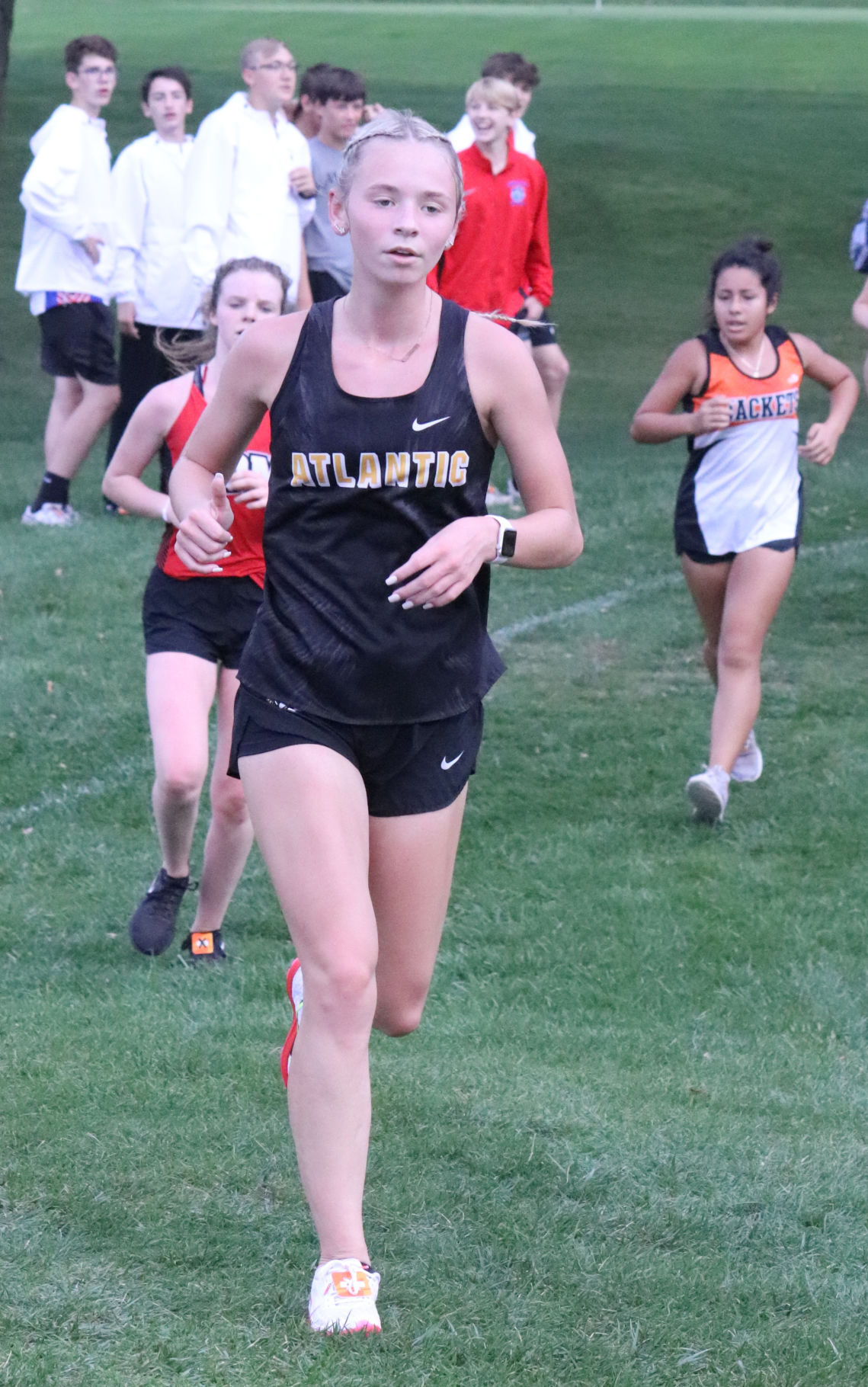 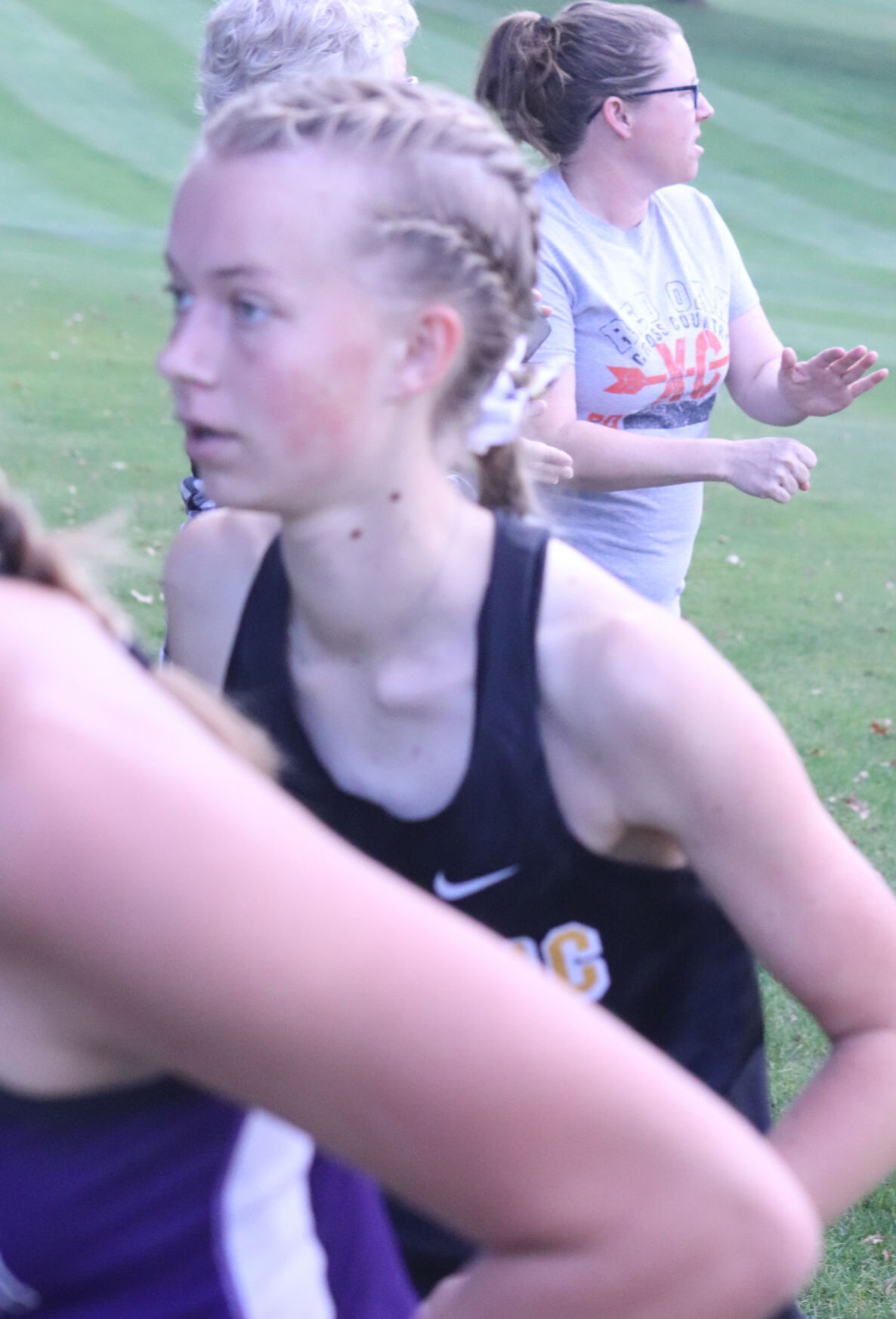 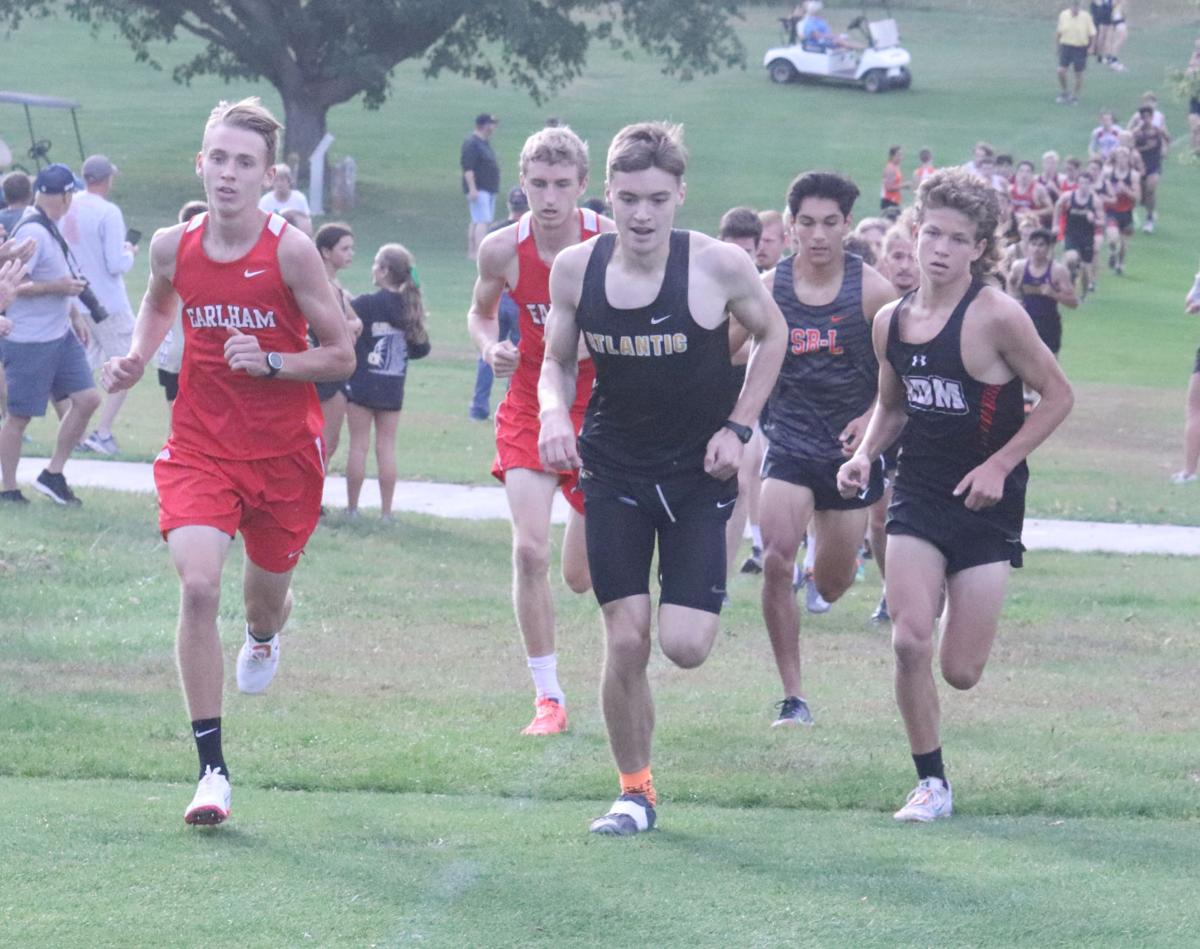 Atlantic’s Drew Engler was still at the front of the pack at the 1-mile point, with Earlman’s Jayden Dickson and Dominic Braet, and ADM’s Cooper Greenslade among the other front runners.

Atlantic’s Drew Engler was still at the front of the pack at the 1-mile point, with Earlman’s Jayden Dickson and Dominic Braet, and ADM’s Cooper Greenslade among the other front runners.

ATLANTIC – It was a great feeling for Addie DeArment to get back out on the cross country course.

Since the first week of competition, she’s been nursing a hamstring injury and it’s kept her from directly contributing to a sport she’s done so well in over the past four years.

The Trojan senior was supposed to have competed at last week’s Southeast Polk Invitational, but the weather put a stop to that meet. So she competed at that evening’s “Fun Run,” and then her first meet for real came Thursday night, at the Trojan Invitational at Nishna Hills Golf Course.

Suffice it to say there is no surprise to hear her speak well of her first meet.

“It was really good to be back, I was super excited,” said DeArment, who’s having a big week as she’s also on the homecoming court. “I was ready and supposed to run at the meet at Southeast Polk but that ended up getting cancelled. So (the fun run) was technically my first meet back, but this was for real.

“It was fun,” she continued. “I was so excited to be back and it was great that it was the home course and home meet and senior night. It was just a special moment. It’s a really fun week and I was so glad to run at the home meet.”

DeArment ended as the No. 4 runner for the Trojans, coming in 46th with a time of 23:31.5, more than enough to help contribute to the score and an eventual sixth-place finish for the Trojan girls.

Ava Rush led the way with her fourth-place, timing out at 20:13.7. The dual-sport junior then rushed – no pun intended, or maybe it was(!) – to Winterset to play for the Trojan volleyball team against the Huskies in non-conference competition. Claire Pellett was the other medalist for the Trojans, finishing in 21:31.3.

“It was a little tougher on my legs, feeling a little sore,” said Pellett. “It was a great night to run ... and with everyone cheering it was a nice night to run. It just wasn’t one of my best races but I was still pleased with how I finished on this course.”

The Trojans had a rigorous week of training, with mile repeats on Monday (repeat runs over the first mile), a progression run on Tuesday (with DeArment swimming or biking on alternate dates) and then focusing on starts and finishes on Wednesday.

“It’s like (coach Dan Vargason) says, ‘We’re not really training for the season right now, we’re looking for the end of the season because you have to wait two or three weeks to see your results.’ We’re training now so we can have results later,” said Pellett.

The boys used that same training and turned it into a solid fourth-place finish.

Senior Drew Engler led for the early part of the race and was still at or near the very front after the first mile. He eventually would finish a solid 10th, with a time of 17:54.90.

“I tried getting out to a fast start because coach told us it would get a little narrow,” said Engler. “I didn’t know I’d be first but I ended up getting a good pace and kept it up, and picked it up (at the end) ... and finished in a decent time.”

Zane Berg also medaled, coming in 14th at 18:01.6. But one of the surprises of the meet was Bennett Whetstone, who had his best race of the season with a strong 19th-place finish at 18:14.4.

“We had hard practices and they didn’t care,” said Vargason. “They ran and competed ... and that’s easily the best meet of the season. It had nothing to do with the location ... this is a hard course and we ran well.

“Bennett was tremendous,” the coach continued. “That was hands down his career-best performance, and not just the time, but the guts. He had this look on his face the entire time, like he was chasing somebody. Come to find out; he said he had a rough week and he took out on the course.”

Whetstone admitted he wasn’t feeling it at the start of the race, but he picked it up later.

“Once we started I pushed myself to get out pretty far and I really leaned downhill like (Vargason) told us to,” said Whetstone. “I just kept a consistent pace throughout the whole race and I just wanted to stick with people I saw.

“Training was really helpful because even though we’ve run the course a million times, just getting through it and where to run and how to run it is the best thing we could do,” he added.

Devon Fields finished 43rd, and Tyrell Williams finished 50th place to round out the scoring for Atlantic.

It’s been a competitive lower part of the lineup, with Mason McFadden running his first varsity race this season and came in 66th. Alex Sonntag’s 70th-place showing rounded out the lineup.

“I thought we were strong, 1 through 7 in the lineup,” said Vargason. “But then you go to the JV lineup and all the way through we had guys who did a great job battling.”

For the girls, Belle Berg (35th) and Faith Altman (49th) rounded out the scoring, while Claire Wiederstein (71st) and Aspen Niklasen (80th) were also in the varsity lineup.

Vargason also was happy with how the girls ran, throughout the top 7, and especially pleased with how DeArment competed, despite not going full out.

“We kept her scaled back and we just wanted to continue that injury,” said Vargason. “Now the cat’s out of the bag and people better watch out because she’s going to train hard and keep battling. She’s getting healthy at the right time.”

Riverside also competed at the Trojan Invitational, and the Bulldogs were paced by a pair of 30th-place finishes on both sides: Mason McCready for the boys, Becca Cody for the girls.

Clear to partly cloudy. A stray shower or thunderstorm is possible. Low 57F. Winds S at 10 to 20 mph.

Clear to partly cloudy. A stray shower or thunderstorm is possible. Low 57F. Winds S at 10 to 20 mph.