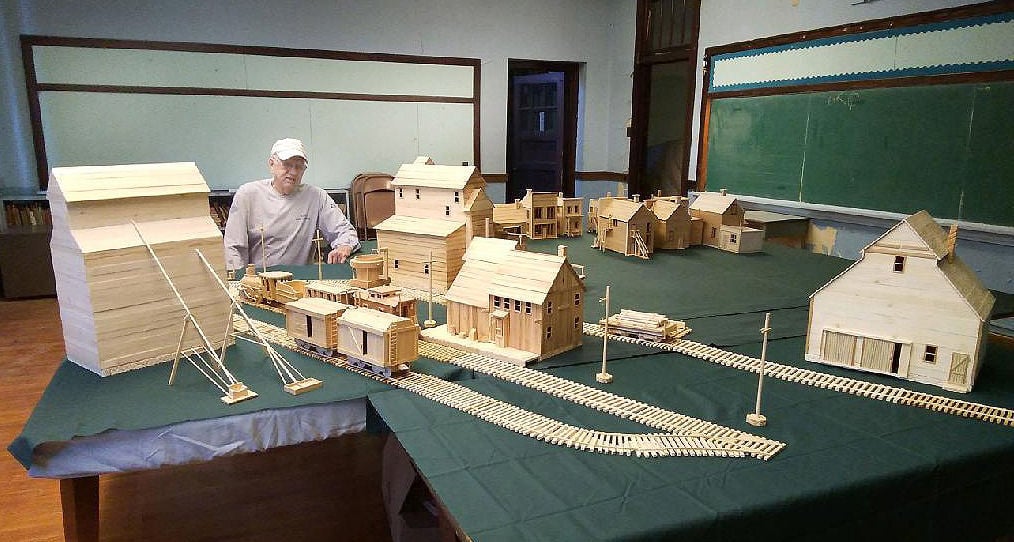 Ray Mundy with the display in the school house in Gray. 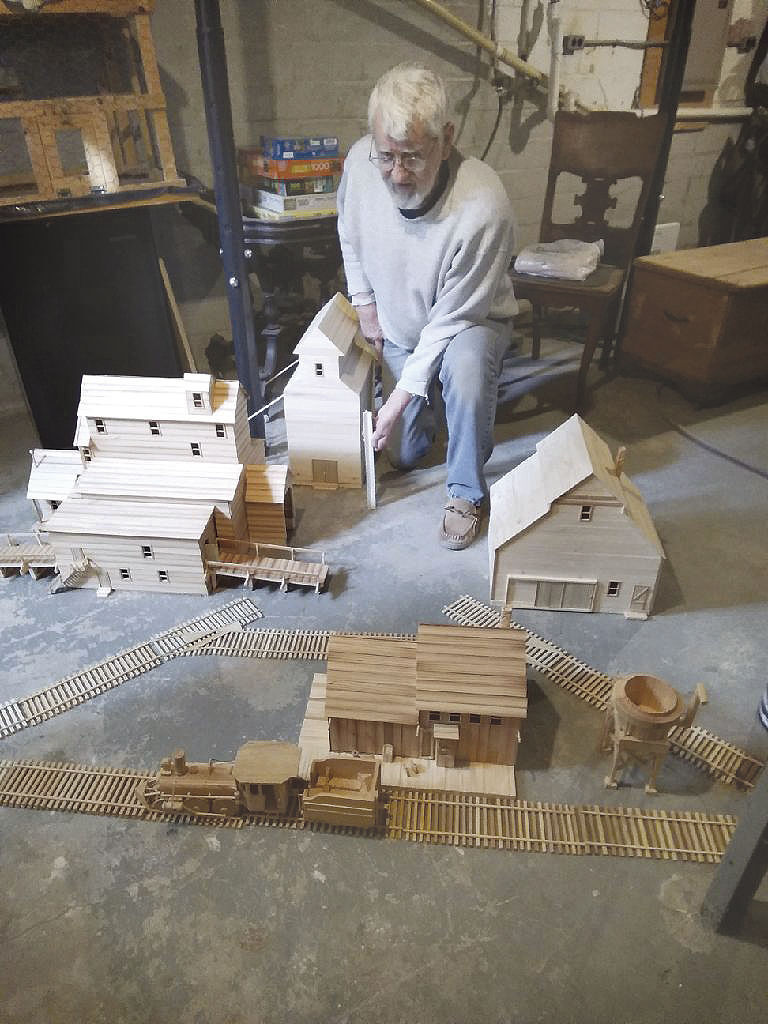 Ray Mundy made a work area in his basement just before winter — about September 2020 — and it gave him something to do during the pandemic. Most of the buildings were completed in eight months. 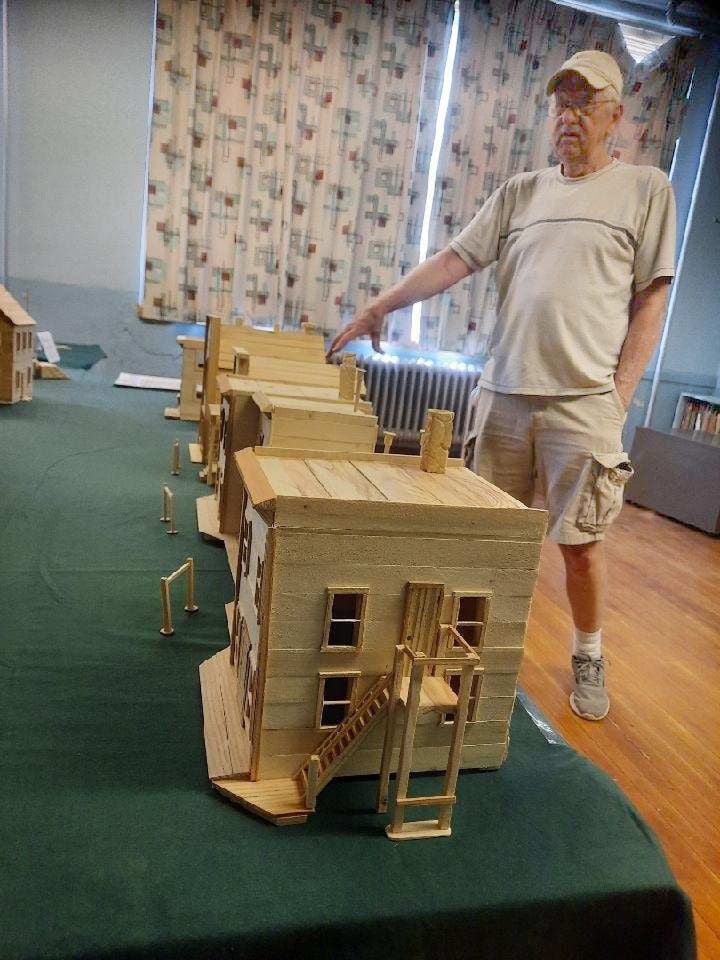 Ray Mundy with some of the houses he built from Gray, before a big fire in the 1920’s. 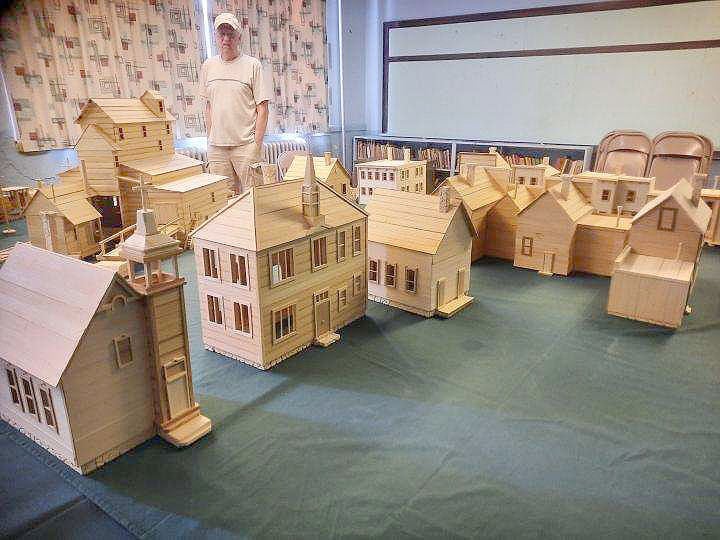 These little wooden houses show what the town of Gray looked like before a fire burned most of the downtown. Ray Mundy wanted people to be able to see what it had looked like, back then. 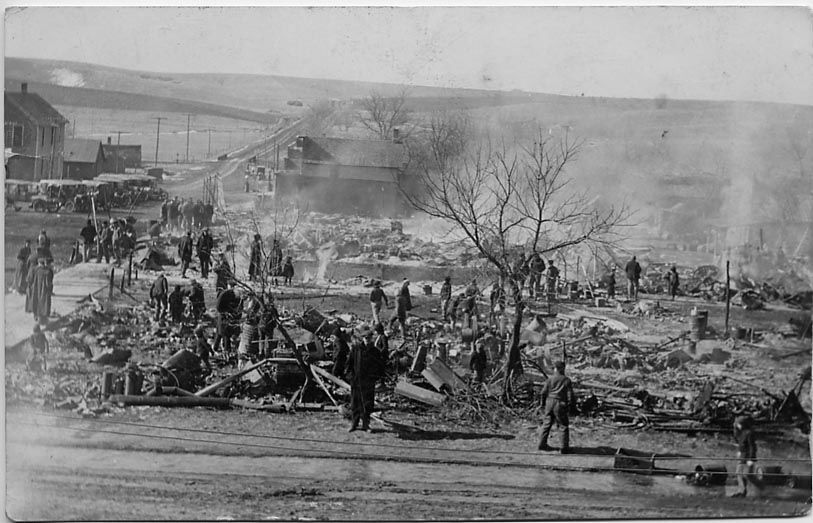 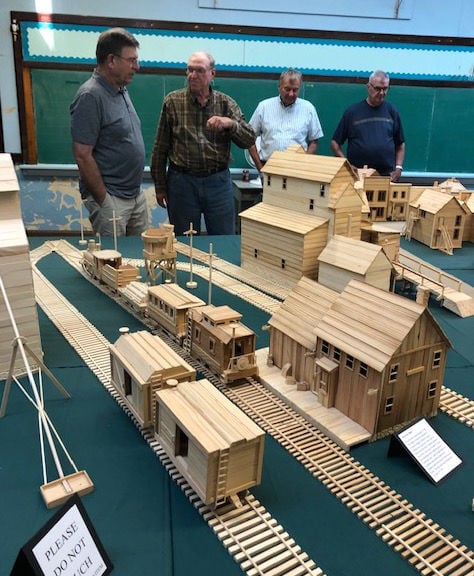 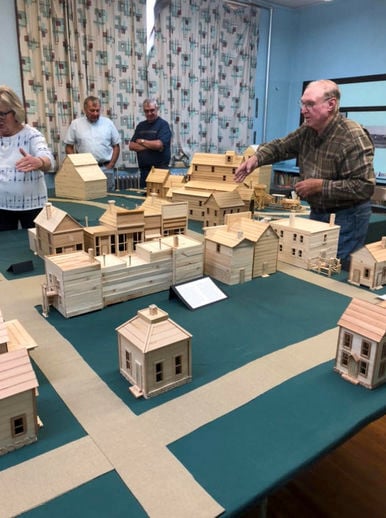 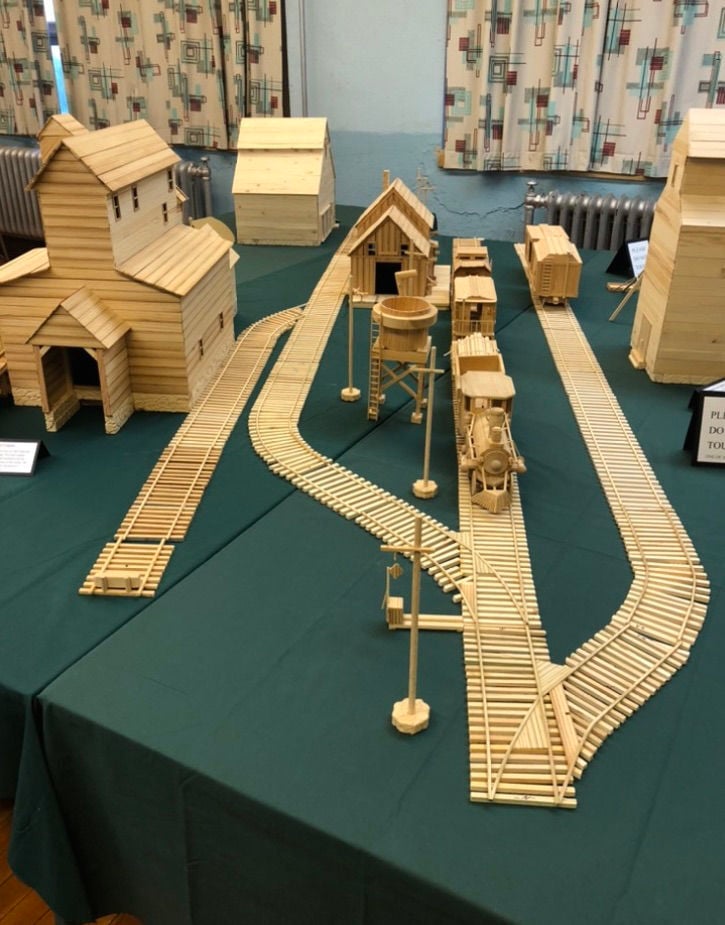 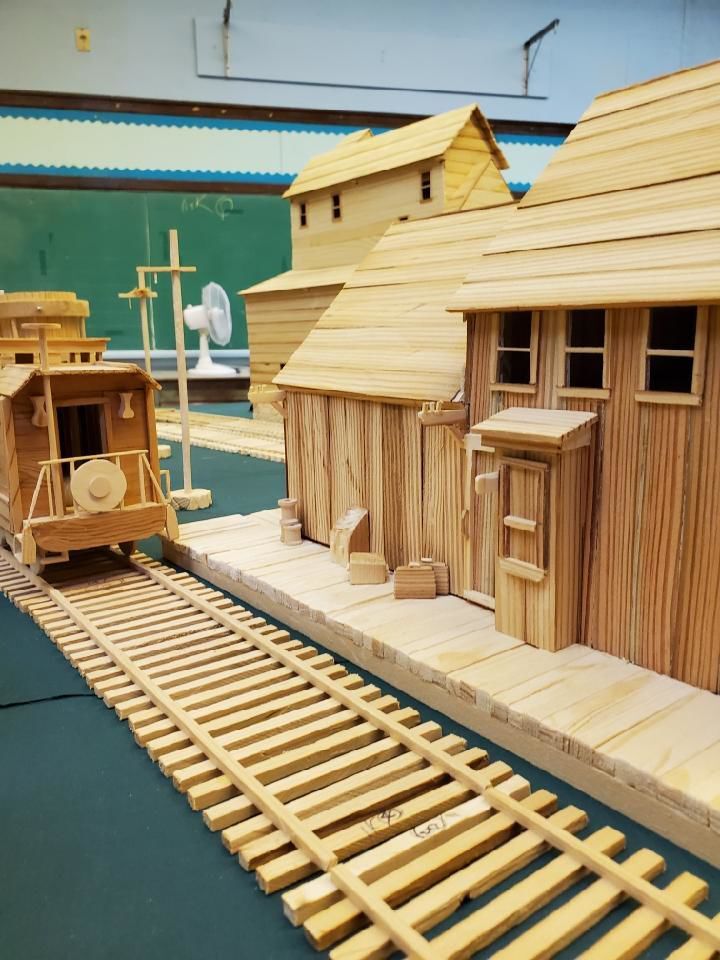 Ray Mundy with the display in the school house in Gray.

Ray Mundy made a work area in his basement just before winter — about September 2020 — and it gave him something to do during the pandemic. Most of the buildings were completed in eight months.

Ray Mundy with some of the houses he built from Gray, before a big fire in the 1920’s.

These little wooden houses show what the town of Gray looked like before a fire burned most of the downtown. Ray Mundy wanted people to be able to see what it had looked like, back then.

GRAY — Ray Mundy and his wife Lorna live in Gray, and a picture in a book about the town spurred him to start a project that has grown into a smaller copy of Gray, from years ago.

Ray isn’t a Gray native, he was born in Des Moines, he and his wife farmed in southern Iowa for some time, then moved to Gray about three years ago. In September of 2020, Ray set up a work area in his basement. The pandemic was keeping him home and he was looking for something to do.

“We got the centennial book,” Ray said, “And we saw a picture in there (from the fire).” In 1922 much of the business district of Gray was destroyed in a fire. He decided to start building a depot, because he’d built a train a few years before.

“I was retired, and I needed something to do anyway,” he said.

Originally he planned to just do some buildings around the depot, but the project didn’t stop there.

He showed some of the early work to an elderly man in town who had become his friend, asking him what he thought about it.

“The poor guy, I made him cry a little bit,” Ray said, “And when I asked what was wrong, he said it just brought back memories from when he was a little boy.”

Ray asked him if he liked the building, and the man told him, “very much so,” and wanted to know if Ray would do more.

After talking with some of the elders in the town, Ray’s wooden version of Gray found a home in a classroom in the old school building, where the public could see it. Since then, Ray said, hundreds of people have come to see the display.

In the 1920’s the town of Gray was growing, grain production — including wheat — along with livestock production was strong and having a train that stopped in town was a big plus. The town had been laid out in 1881 and the railroad came to town in 1882. At the turn of the century, some of the area residents thought the town might even grow to be larger than Audubon.

But then there was the fire.

Lorna has put together information on cards to place by the buildings, telling more of the story.

One details the night of the fire:

“Lloyd Sexton, the night watchman, sounded the alarm around 12:45 a.m. (on Feb. 7, 1922) after hearing an explosion and seeing smoke coming from the front windows of the Rostermund store on the west end of Main Street. Gray’s firemen almost had the fire under control in the adjoining building, but they ran out of fire control chemicals. The winds were blowing strong out of the north west and the fire quickly accelerated down the street of businesses. The town had no water supply to continue the fight, though they started a bucket brigade to save the buildings across the street.

All the businesses on the north side of Main were lost, except for one on the west side of where the fire started. Two general stores, two hardware and implement stores, a barber shop, pool hall, and an empty drug store were lost in 40 minutes from the time the alarm was sounded. These were the principle stores supplying merchandise to the community. Insurance paid only half of their losses, and most of these establishments went to surrounding towns where they could purchase existing buildings instead of rebuilding.”

In less than a year Ray constructed the wooden buildings lost to the fire, along with some that had survived. Originally he made them from wood from a door frame. Most of the wood was mahogany, he said, but there was also some pine wood used. Later he used wood he around town (from buildings that had been torn down), so some of the buildings are made of old pieces of wood actually from the town.

He cut all the pieces with a table saw, and used glue to put them together. “There are no nails in there,” he said.

How many buildings has he done?

“Oh my goodness,” he said, “(That’s) the wrong question.” He had to think about how many — “over 20,” he said, adding that over half the town was complete, with about seven homes to complete. Unfortunately his health issues will probably keep Ray from completing them, but he said he’s leaving the work to his son and wife to complete.

“I just wanted to get it to where it was, before the fire,” Ray said.

Ray said he enjoys working with his hands, and actually, this isn’t the first town he’s built.

He’s also built a smaller scale town for Rockwood, Tennessee, and that one is an old western town. “The John Wayne era,” he said. “This time, the second time I built one, it just kind of got away from me in scale.”

He said nobody taught him how to do it, “I just wanted people to see it, and they encouraged me to keep going.”

People attending fish fries, community dinners, pheasant hunters and others who come back to the town to see relatives will come to see the display. Ray said, “People come from all over the midwest, some went to school here.”

For houses that are still here and were since before the fire, Ray said he went to speak with current owners to see if they had pictures of what the house looked like then. One, for example, was a six bedroom home that was just a block and a half from where the fire had been but was spared.

“When people look at these, they are in awe that it looks so much like their house,” Ray said.

He remembered a child who came to see the buildings. “He was nine years old,” Ray said, and he kept going around and around the display. Ray asked him what his favorite part was, and the child pointed out the telegraph wire, with little birds on it. He liked the little birds.

Ray has included many little details like the telegraph line that came off the train station.

“I’ve got the streets and the signs all up,” Ray said.

Since he started, Ray said he’s learned things about the town. “The town’s not very big, it’s like three blocks by three blocks,” he said. He was surprised about the amount of wheat they produced in the area, and a lot of livestock was shipped out on trains.

“There was a big creamery here, butter made here was shipped all over, some as far as New York City,” he noted. It was next to where his house is today, but there is no sign of it now, though his wife Lorna noted that some crocks from the creamery had been found.

Ray hopes that people who visit Gray — for reunions, special events or community dinners — get a chance to see what the little town looked like before the fire, a project that started in a basement during the pandemic and just kept growing.

Partly cloudy in the evening with more clouds for later at night. Low 22F. Winds SW at 10 to 20 mph.