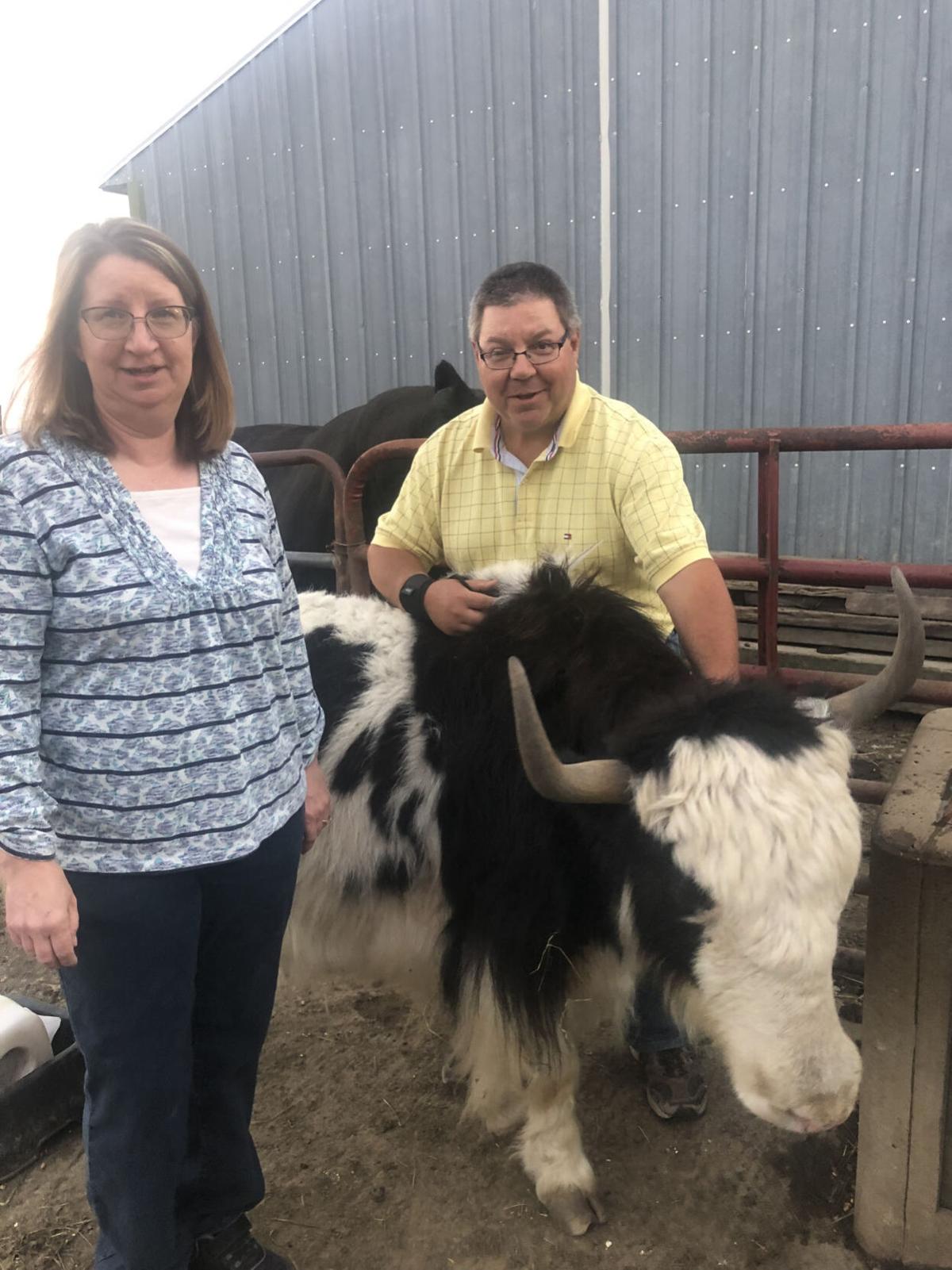 Lisa and Neal Meseck, with one of their yaks. Yaks have a heavy top coat that they keep all year, and a soft undercoat that they shed in spring. That undercoat is desired because it’s so fine, and can be spun into yarn and made into different items like scarves or other clothing. 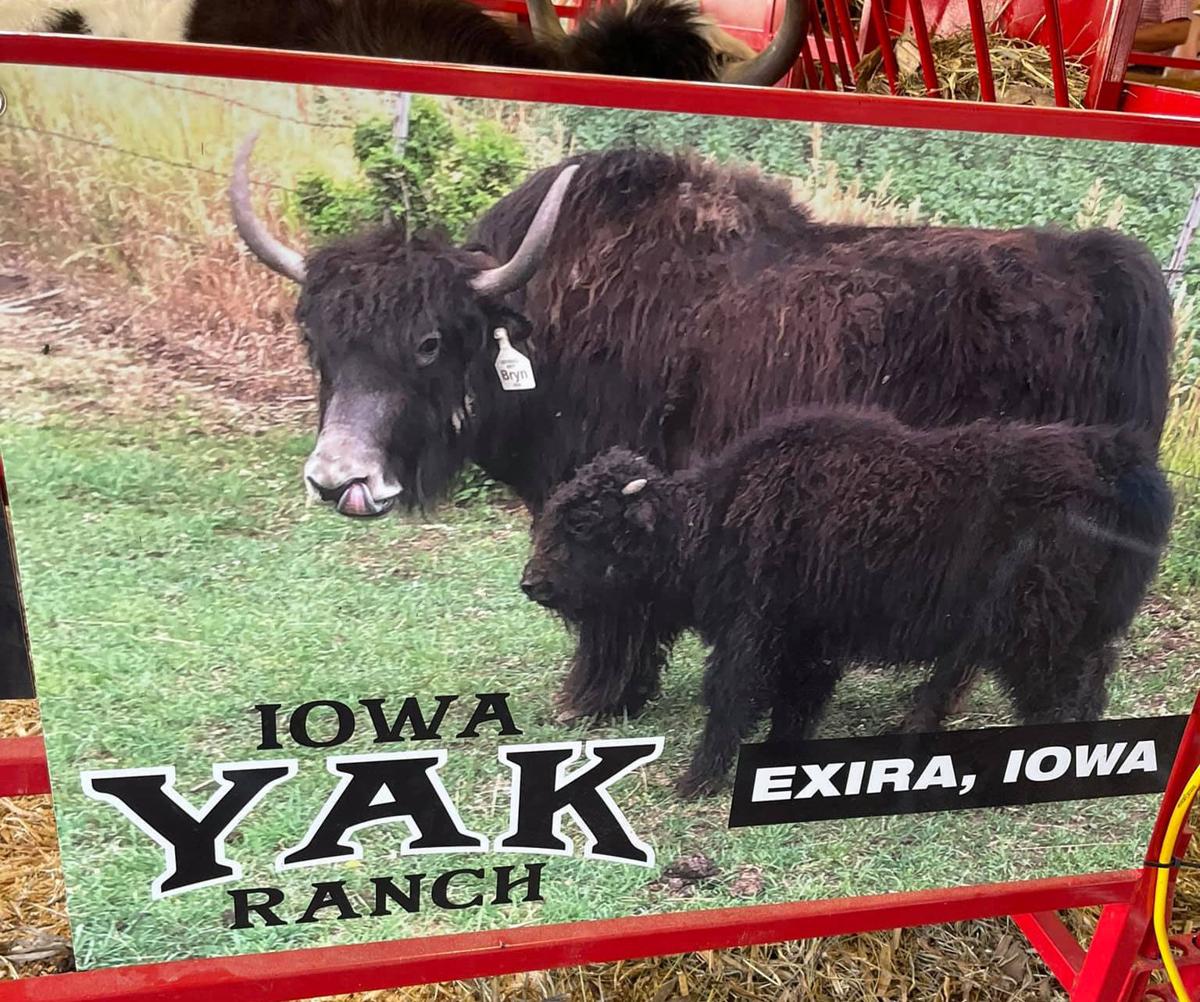 Neal Meseck's yak even made an appearance at the Iowa State Fair, displayed on the Avenue of Breeds. 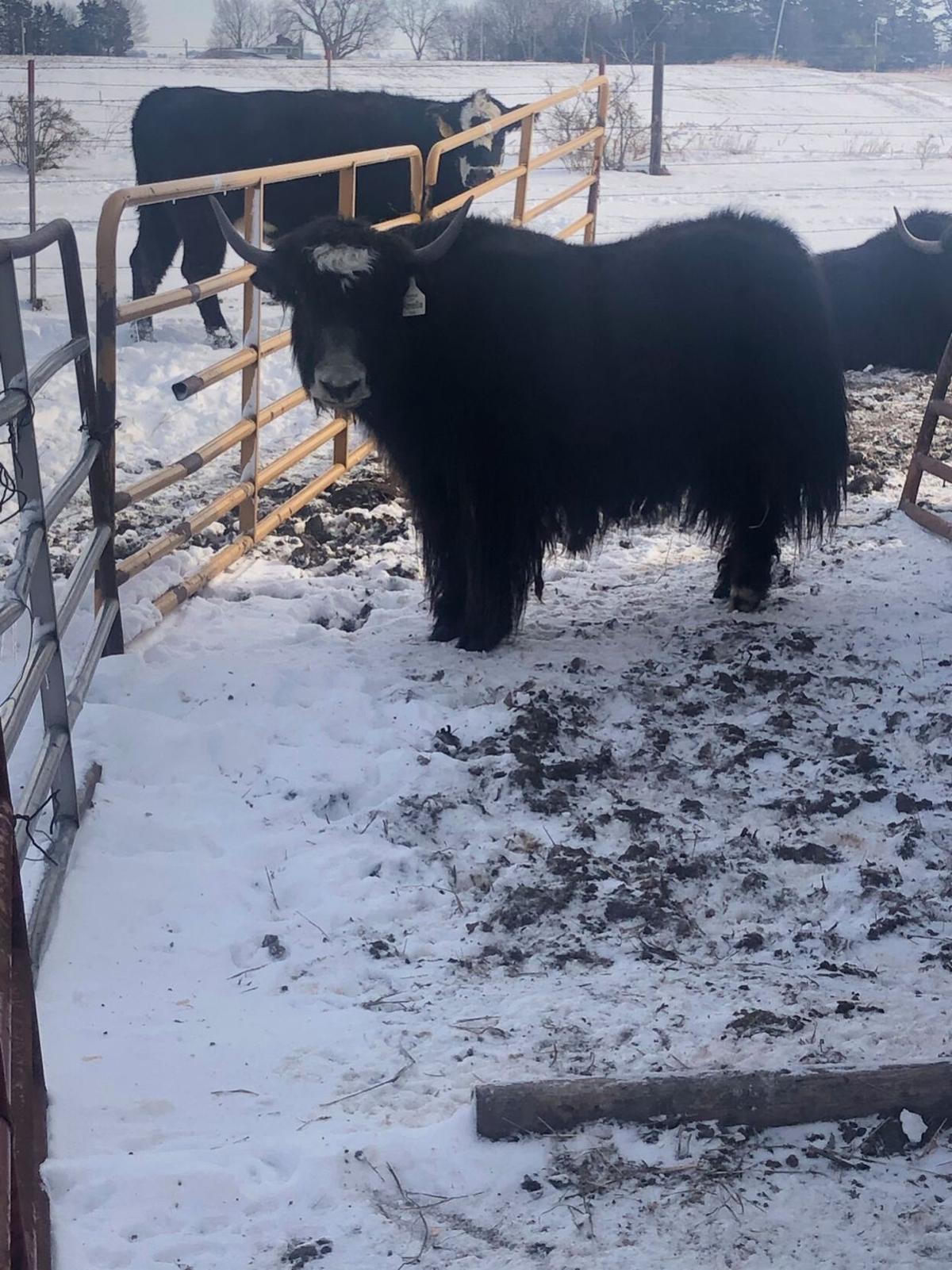 Lisa and Neal Meseck, with one of their yaks. Yaks have a heavy top coat that they keep all year, and a soft undercoat that they shed in spring. That undercoat is desired because it’s so fine, and can be spun into yarn and made into different items like scarves or other clothing.

Neal Meseck's yak even made an appearance at the Iowa State Fair, displayed on the Avenue of Breeds.

EXIRA — Neal Meseck and his wife Lisa live just north of Exira and east of Highway 71 where they raise some cattle of an unusual variety: They have Tibetan Yaks.

Meseck took a yak cow/calf pair to the Audubon County Fair, and had one of his yak cows on the Avenue of Breeds at the Iowa State Fair, giving people a chance to see the unusual breed up close.

Neal said he had wanted to have some livestock at the acreage they live on — and he wanted to do something a little different. “We had neighbors who had alpacas,” he said, “and that was a first thought, but I’d raised cattle in the past, and yaks just seemed like something I was drawn to.”

Why yaks? He said it all boiled down to “Food, Fiber and Fun.”

Yaks can be raised for their meat, which he said was similar to beef but very lean, and very healthy for you. Yak meat, he explained, had some of the lowest cholesterol — about the same as turkey breast. Raising yaks for meat did take a little longer, he said they take about three years to be big enough for processing, and won’t yield as much meat as an average steer.

They can be crossbred with cattle, producing a bigger animal but some of the health benefits of the meat would be lost.

Yaks also have a very different coat — with a long overcoat of hair, and a shorter, insulating layer of hair that they shed out in the spring.

That hair is a renewable resource, which can be made into yarn and woven into different items.

“They shed in the spring, and you comb it out,” he said. The undercoat, 2-3 inches long, can be combed with a fine toothed comb, processed into yarn and is similar to cashmere. It can sell for $5-$8 an ounce, and Neal said he had taken some to a fiber mill, and has talked with some women who had their own spinning wheel and were interested.

So far, he admits, he hasn’t made a big profit from the yaks, but was just getting into the business, but he has had a lot of fun having them, and talking to people about them.

He saw his first yaks in person at the 2019 Denver Stock Show, where he met with breeders and that led to buying his first five yaks in 2020. Since then the herd has grown to 10 — two of the cows he got were bred females, and the first calved in March. “And that was, as far as I know, the first yak born in Iowa, or the first registered one, at least,” he said.

Yaks come in three color patterns — they are usually a dark brown to black, and the solid color is called Imperial. A coat color with just a white spot on it’s face or socks is called Trim, and third pattern, called Royal, is white with spots, like a holstein cow.

He said like cattle, they are easier to handle the more you work with them, “the more gentle they will get.”

“Ours are all real tame — the first five I had, I’ve been in the pen with them to hand feed them,” he said. Two were yearling steer calves, and he plans to break them to lead, and eventually to pull a wagon, so he can take them to area parades, and maybe do hayrides in the fall.

“You can always go on a hayride pulled by a tractor or a horse,” he said, “but where do you get to go on one pulled by a yak?”

After the two calves born here, he got three yaks from a young woman in Colorado who was moving back to Iowa and contacted him. “She offered them at a reasonable price, and would deliver them to Iowa,” he said, adding those three were halter broke and very friendly.

He took one of the three to the Fallapalooza at the Nathaniel Hamlin Park and Museums, and also had one on display at the Iowa State Fair.

He said he’s learned things — like the fact that yaks don’t shed all at once. He noted that it could take multiple combing sessions to get all the undercoat out, and with his increasing herd, he may need help doing that in the spring. “By July they are pretty well done shedding,” he said.

Neal is from the Crawford County area, where he grew up on a cow/calf and crop farm. He still has some cattle on his father’s farm there. His wife is from the Exira area, and currently works at the Medicap in Audubon.

Neal said he wants to get a sign to put on Highway 71 that just says “Yaks,” and welcomes groups and individuals who would like to come see them. He said a local camping group came out and 4-H clubs and Sunday School groups have come out as well. “Everyone loves the babies,” he said.

In fact he said while his wife wasn’t initially crazy about the idea of yaks — she really liked the babies too. He told her every man goes through a midlife crisis, and the yaks were “way cheaper than buying a Corvette.”

He can be reached by email at nealmeseck@icloud.com for those who want to come out and see the yaks.

His favorite part about having yaks? “It’s the entertainment they provide. They are fun animals, I enjoy working with them.” He enjoys telling people about them. “For example, they don’t moo like a cow,” he said. “Their latin name means grunting ox, and that grunt is even more unique than a pig, it’s a deep grunt,” he said.

They also like the winter in Iowa. He said the first winter he put out corn stalks for them to lay on. “And they went out to the new snow and laid down there instead.”